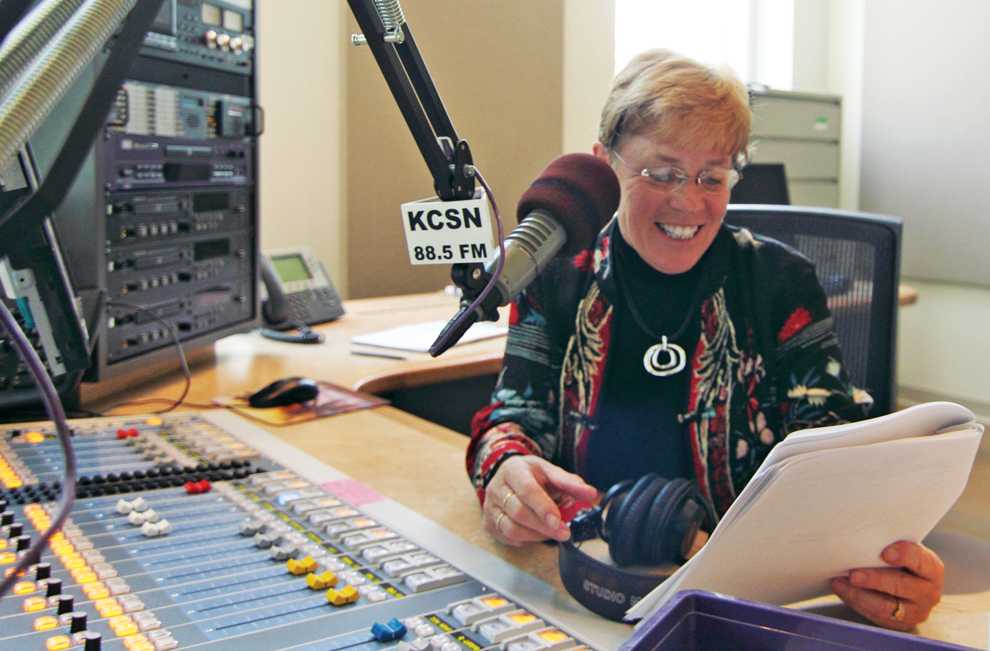 Karen Kearns, general manager of KCSN, reads a script and demonstrates what she would normally do to record "spots," which include ticket giveaways and support for programs. Photo Credit: Simon Gambaryan / Contributor

Differing from stations that spit out top 40 hits repetitively throughout the day, KCSN is highlighting storytelling in music currently missing in radio, Kearns said.

“It’s music and message, and that’s all that really matters,” she added.

The station spent more than 15 years in a temporary space in the dorms, and Program Director Sky Daniels hopes to attract students to the station with the new space and format, though he knows listeners will need to leave their comfort zone of familiar classics, or new songs played over and over.

“It requires being willing to acquire an interest in creative legacy artists from decades before, as well as a variety of new artists and styles—all on one channel,” Daniels said in an email interview.

Still, there are plans to promote the new sound of the station the first few weeks on campus, such as handing out free CD’s and stickers and trying to have the station streamed from the internet in Freduian Sips around campus, Kearns said.

A pledge drive will also take place, highlighted by a concert in Plaza Del Sol on Oct. 29th. The headliners are going to be big acts, said Kearns, though she wouldn’t reveal who the artists are.

With a professional studio located in the VPAC, Kearns is poised to bring in exclusive performances in studio. With at least 10 acts performing so far, including singer-songwriters John Hiatt and Rhett Miller, she hopes for at least one a week.

“(It’s) a place for artists to stop by,” Kearns said. “It makes (listeners) feel engaged.”

The songwriter reigns supreme at KCSN, featuring artists who have a timeless sound, such as Adele, Arcade Fire and Mumford and Sons, which they hope will translate into a niche market they say hasn’t been tapped into by other local radio stations in recent years.

“I was attracted to the idea that the station was doing something a little different,” said Nic Harcourt, legendary music DJ and host of “Connections” on the weekend. “It’s about the music and not all the crap in between.”

Harcourt is one of a growing list of new faces who joined KCSN since switching formats, including Daniels and Julie Slater, who hosts “Out on a Limb” on Saturdays.

A challenge KCSN faces is generating enough interest in listeners to contribute to the station.

The station must generate considerably more income annually than in the past, Daniels added.

KCSN had played classical music for several decades before switching over to the new format of eclectic rock, but were unable to hold a large enough audience to stay competitive against other classical stations like KUSC-91.5 FM.

“Our audience while loyal is small,” Kearns said.

It’s been a long time in the making, but Kearns is happy to finally have a permanent home in the VPAC, and a brand new sound to share with the community.

“We’re just thrilled to be here (in the new studio),” Kearns said. “We want to be the station for L.A.”