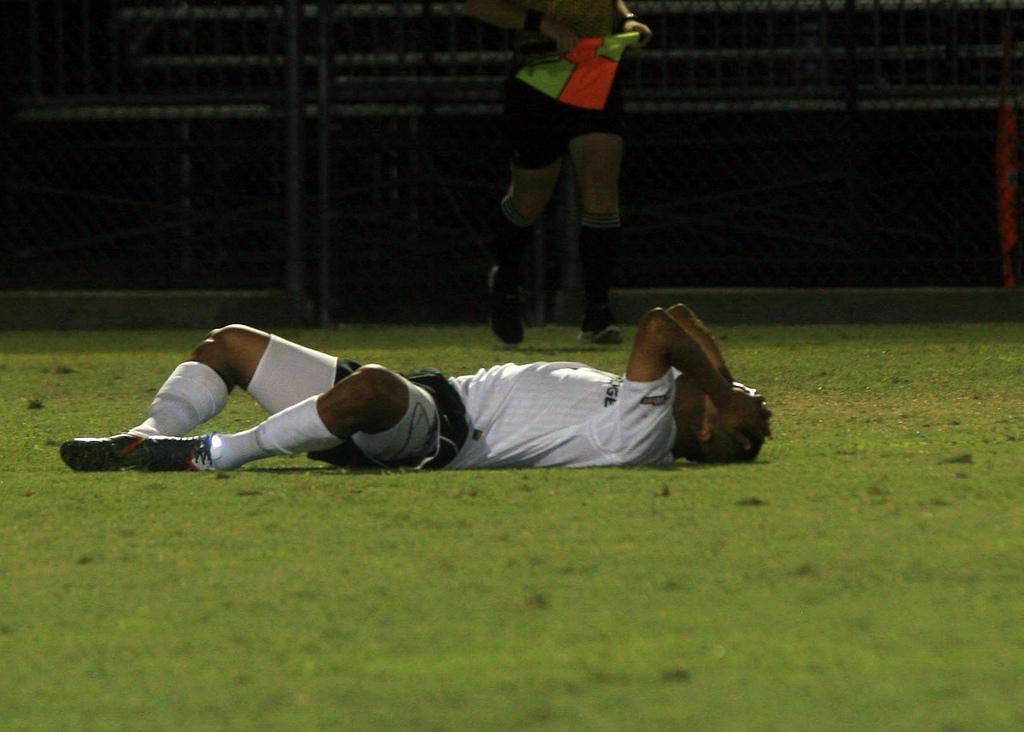 Disappointment: One of the Matadors falls to the ground and covers his face following CSUN's 2-1 overtime loss to UNLV at the Cal State Northridge Labor Day Classic on Thursday night. Photo Credit: Daniel Hoyos / Contributing Photographer

Behind their home crowd as the host of the Cal State Northridge Labor Day Classic, the Matadors scored a late goal to send the game into overtime, but it wasn’t enough and they ultimately fell 2-1 to the quick-paced UNLV Rebels.

Though the CSUN crowd was in full effect Thursday night, beating drums and yelling at every call the referees made against the Matadors (1-1), their efforts made little difference in the match.

“Defensively, we made it pretty tough on ourselves,” said CSUN goalkeeper Michael Abalos, who finished the match with two saves.

Though the Matadors outshot the Rebels 19-11, 5-4 on shots on goal, UNLV (1-1) had the momentum in its favor for most of the match, quickly counter-attacking every time they stole the ball from CSUN.

After the Rebels opened the score in the 66th minute, the Matadors began to wake up offensively, Davila added.

The Matadors, who recorded seven shots in the first half, went into halftime with a scoreless tie. Rebel goalkeeper Ryan Harding defended the net well by blocking two shots from forward Edwin Rivas and one from defender Nicholas Hamilton early in the match.

UNLV only had two shots in the first half and didn’t have a shot on goal until the 67th minute. Then, defender Mike Mota took free kick from 20 yards out that found the back of the CSUN net.

Northridge was able to tie the game in the 79th minute with a goal from Rivas, assisted by midfielder Chris Smith and defender Nicholas Hamilton.

The Rebels played at a fast pace, running the ball down the field at a rapid pace. UNLV midfielder Salvador Bernal was a difficult man to catch, displaying great ball control and speed.

“They had a type of play that made them look really fast and we had a tough time at first adjusting to that,” CSUN co-captain Joe Franco said. “We have to get use to that because we’re going to see that for the rest of the season.”

CSUN may have played with too much intensity, accumulating 12 fouls in the first half and finishing the match with 22. UNLV had half as many fouls with 11. Matador midfielders James Rochlitz, Yarden Azulay and defender Taylor Bowlin received yellow cards for CSUN while UNLV finished the game cardless.

The Matadors had many scoring opportunities the second half, but UNLV’s defense was able to stop them from making any progress.

“We have to tighten up on our mistakes from this game and learn from our mistakes,” Abalos said. “Saturday’s a new day and we’re looking forward to the challenge.”

Saturday’s challenge is none other than defending national champion Akron, who earlier tied 0-0 in overtime against Fullerton. The match is slated for 7 p.m. at Matador Soccer Field.