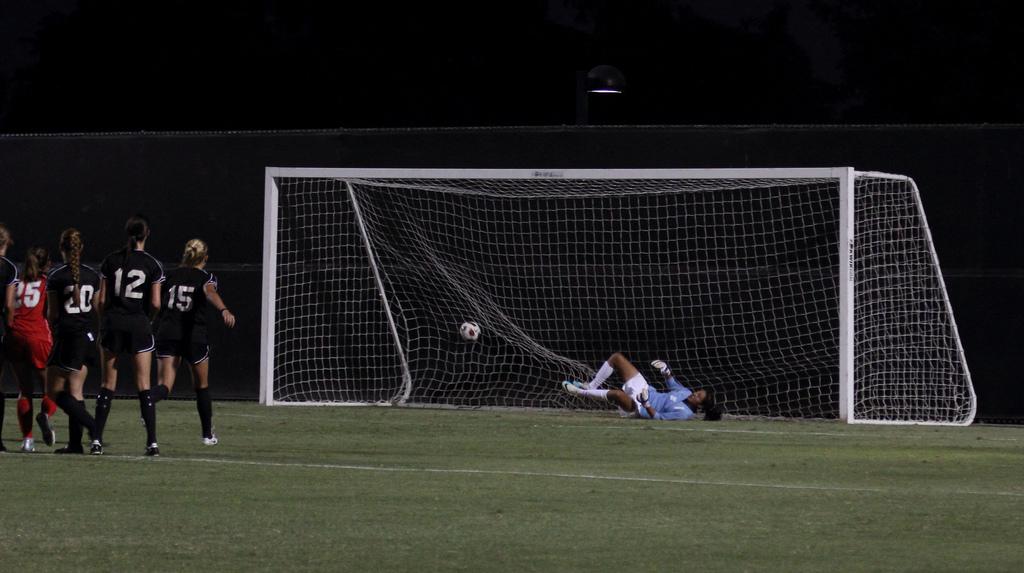 The CSUN women’s soccer team continued its miserable start to the season and lost to New Mexico, 1-0, on Friday night at Matador Soccer Field. It was the Matadors’ fourth straight loss to begin the year.

Once again, the Matadors struggled putting the ball in the back of the net. They had a few chances, but couldn’t convert. They’ve only scored one goal this year while allowing nine.

“We just need to work on finishing,” said CSUN junior forward Melissa Fernandez, who has the lone Matador goal of the season.

The Matadors (0-4-0) started the game with an offensive mentality, controlling possession.  The team did not allow the Lobos’ (2-1-2) defense to relax for most of the first half.

CSUN had two shots on goal in the first half, including one by Fernandez that was blocked by a charging Kelli Cornell, the Lobos’ junior goalkeeper.

The Matador’s first half defense had a strong showing, only allowing two shots on goal, which junior goalkeeper Cynthia Jacobo saved.

The only goal of the game came in the 38th minute after New Mexico senior forward Jennifer Williams scored on a penalty kick. The penalty kick was given to the Lobos after freshman defender Leandra Walker got called for a handball while inside the penalty box.

CSUN started the second half the same way it ended the first: with a furious pace on offense.

The Matadors controlled possession once again in the second half.  The team had several opportunities to tie the game, but just could not put the ball in the back of the net.

“It’s good that we are getting chances,” Fernandez said. “The next step is to execute them.”

In the second half, the Matadors had two corner kicks and kept the pressure on New Mexico’s defense.

The defense for the Matadors was strong again, too, allowing only one shot on goal.

Despite being notoriously in a sour mood following the game, CSUN head coach Keith West qualified his team’s overall performance as “good.”

“We did a great job,” West said. “(We) got to finish our opportunities.”

For New Mexico, Williams, senior midfielder Jael Fanning and senior defender Zaneta Wyne each had a shot on goal.

The Matadors had five shots for the game and gave up 11 to New Mexico. Cornell had three saves and a shutout while Jacobo’s two saves pushed her career total to 124, 19 away from tying Leah Elliott for fourth all-time in school history.

Going into the night, the Matadors thought New Mexico would play very physical. They were right. The Lobos finished the game with 14 fouls.

“I don’t think we got pushed around that bad,” Fernandez said.

Despite yet another loss, the Matadors felt they played consistently on both sides of the ball.

“I think we were a better team on the field today,” Fernandez said. “Unfortunately they got a penalty kick.

The Matadors will have to regroup quickly as they prepare to host Princeton on Sunday at Matador Soccer Field.