M-Soccer: Matadors overwhelmed in overtime by No. 2 Akron 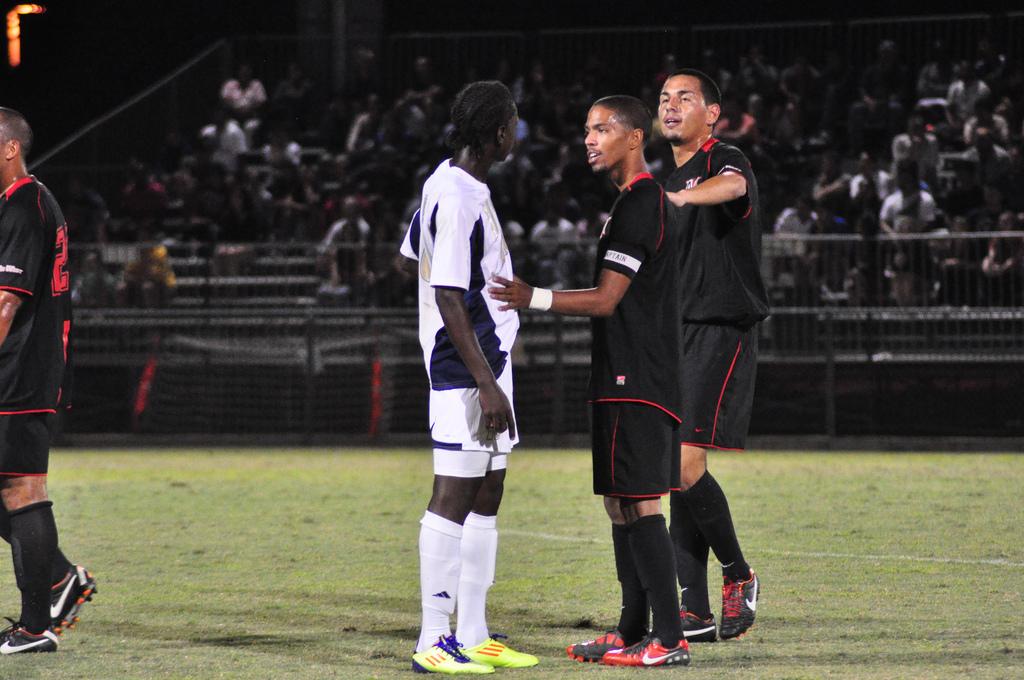 For the second time in the Cal State Northridge Labor Day Classic, the Matadors (1-2) rallied to send a match into overtime. Unfortunately for CSUN, the results were the same as Yarden Azulay’s game-tying goal was not enough to defeat No. 2 Akron on Saturday night and the Matadors lost  2-1 on Scott Caldwell’s golden goal.

“We should have won that game,” said Azulay, who scored his first Division-I goal in the 82nd minute of regulation. “We (at least) deserved a tie.”

Caldwell, a midfielder, hit the game-winner off a cross from teammate defender DeAndre Yedlin in the 106th minute.

CSUN head coach Terry Davila had a few heated words with the referees at halftime, complaining about the early yellow cards given to his players.

Fouls were an issue for CSUN, ending the first half with 10 compared to Akron’s five. The Matadors and Zips ended the match with 26 and 9 fouls respectively.

Matador defender Nicholas Hamilton received two early yellow cards in the first half, resulting in a red card and ejection by the 18th minute.

“I thought the red card early was a product from all the comments being made about the refereeing in the game before,” Davila said. “(Akron) got a little favorable treatment. There were fouls, but the red card was harsh.”

Akron opened the score in the 25th minute via forward Darren Mattocks from about 10 yards away from the net, assisted by Caldwell.

Consecutive yellow cards in the second half for Akron defender Bryan Gallego resulted in his ejection, leveling the field once again for one minute after CSUN had scored the tying goal.

The Matadors looked deflated two nights after an 2-1 overtime loss against UNLV, but managed to rally back and contend with only 10 men on the pitch for the majority of the match.

In contrast to Thursday night’s game against Rebels, early on Saturday, the Matadors were not communicating with one another. Following Hamilton’s ejection, however, they reacted.

“Our team has good unity,” CSUN co-captain Joe Franco said. “I don’t know what hit us, but being down to 10 men sparked a light right under us.”

CSUN acquired three yellow cards in the first 13 minutes of the match and finished the game with five.

Scoring opportunities were in favor of the Zips the entire match. Akron had six different players attempt a goal in the first half. They had eight shots with four on goal entering the locker room while CSUN only shot three times with none on goal.

For the game the Matadors’ eight shots and one shot on goal were dwarfed by Akron’s 24 shots and 14 on goal.

“We defended well and it was hard to penetrate our defense,” Davila said. “We had a tough time holding the ball because we had to work so hard to defend. It’s hard to rest on offense when you don’t have enough players against (Akron).”

The Matadors will try to snap a two-game losing streak when they match up against Missouri State at the TLC Plumbing, Heating & Cooling Lobo Invitational in New Mexico on Friday.