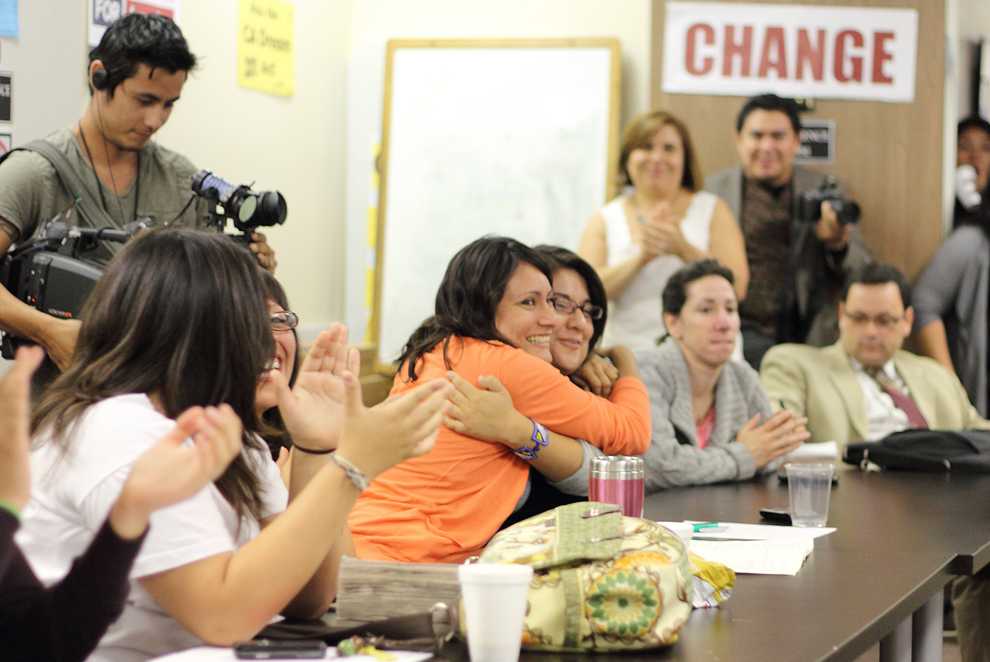 It passed: Helena Villa and Mirna Ortiz hug to celebrate the passing of AB 131 at the Coalition for Humane Immigrant Rights of Los Angeles on Friday. Photo Credit: Simon Gambaryan / Daily Sundial

Undocumented students in California only need Gov. Jerry Brown’s signature by Oct. 9 to be eligible for state financial aid.

The second portion of California’s Development, Relief, and Education for Alien Minors (DREAM) Act passed the Assembly Friday, and the historical bill is on its way to Sacramento.

Brown signed the first portion, AB 130, into law in July allowing undocumented students access to private grants and scholarships, and Senate and Assembly approval of AB 131 in August and September meant students could potentially be able to access public education-funding.

The bill comes during a decade marked by drastic changes in state and federal legislation on undocumented Americans.

The federal version has yet to be approved, but California’s similarly named bill has passed amid strong opinions on both sides.

There have been concerns of whether universities would be able to handle undocumented students receiving aid.

There are about 3,600 undocumented students in the CSU system, according to a study by Educators for Fair Consideration (E4FC).  They account for one to two percent of the student population at UCs, CSUs, and community colleges.

Opponents of the bill fear that all undocumented students, including those studying under AB 540, will have access to pubic financial aid.  CSUN’s population will be considered on the basis of meeting requirements, Vidal said.

Equal rights have been touted as a driving force behind the bill, but economic factors have also played a role in its approval and opposition.

The bill would cut up the $40 million of federal financial aid into smaller pieces, Mehlman said.

Authors of the bill said financial aid will not be strained because institutional funding is paid by legal and undocumented students each semester, said Assemblymember Gil Cedillo.

AB 540 allowed undocumented students to pay in-state tuition as long as they held a a high school diploma or G.E.D., enrolled in an accredited institution, and promised the school they would apply for legal residency as soon as possible, Rodriguez said.

California’s Dream Act requirements mirror those of AB 540, but will also requires the student to graduate with an associate’s degree or study for two years towards a four-year degree, he added.

As tuition fees increase and average student debt at CSUN hovers around $25,000, the bill could alleviate some of the financial stresses faced by undocumented students.

“Some of them have three jobs and they go to school full time,” said Claudia Pardo, secretary of CSUN’s chapter of immigrant rights group Dreams to Be Heard. “And they still can’t afford a car or be able to drive, so they take the bus.”

Pardo added undocumented students do not place burdens on CSUN or any university.

This legislation “gives them a drive to have their diploma right in front of them,” Pardo said. “It’s one step closer to that American dream.”