CSUN plays host to its largest freshman class yet 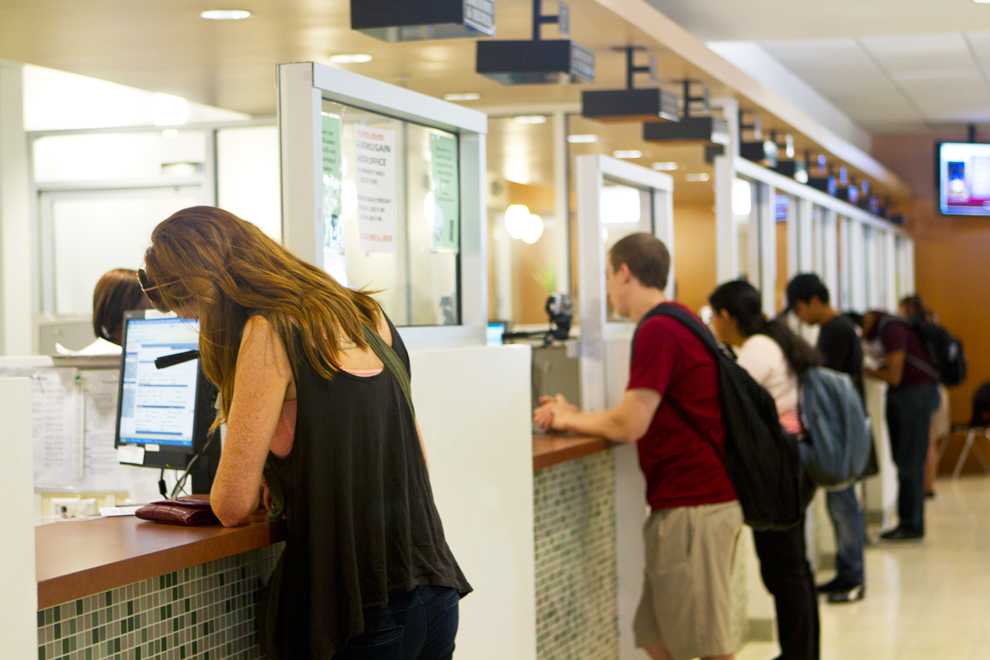 Students line up at the admissions window in Bayramian Hall, to enroll in and pay for classes, submit and pick up transcripts, and get student IDs. In the begining of the semester, the lines usually wrap around the corner and down the hallway. Photo Credit: Kat Russell / Daily Sundial

CSUN’s freshman class has reached its highest number yet this semester, at about 5,200 students, according to Dr. Cynthia Rawich, vice provost and vice president for academic affairs.

The past decade has seen steady growth and although the increase from 2010 to 2011 was not a large one, it has been enough to add about 80 classes in the last five weeks.

Although the increase from last year to this year was not a large one, it has been enough that approximately 80 classes have been added in the last five weeks.  But budget cuts have left CSUN administrators with fewer resources to accommodate more students, according to provost and vice president of academic affairs, Dr Harry Hellenbrand.

“What’s really gone up over the last couple years, more than anything else, is the yield,” said Hellenbrand.

More students who were accepted into the school are actually attending, Hellenbrand said.

The current economic climate could be credited for the rise in student numbers, said Elizabeth Adams, director of undergraduate studies.

Students are chosing campuses closer to home, fewer classes are available at community colleges and tuition at UC schools have reached beyond many families’ financial abilities, she added.

“What’s happening as a result of all that is that is even though CSUN has become more expensive, it’s still cheaper than anything else except community college and at community colleges it’s exceedingly harder to get classes,” Adams said.

First time freshmen don’t seem to feel the effects of the school’s thinning resources.  Many said that the application process was easy and they had little to no trouble getting the classes they needed.

Molina said she wonders what her sophomore and junior years would bring, however. Upper division students have come into her classes trying to add, and she said many of them said they have had to crash all their classes.

Students scrambling to find classes during the few weeks of a semester has become characteristic, partly due to undesirable alternatives.

“One of the problems is that there is space in a lot of the classes on Friday and Saturday but nobody wants to take them,” Adams said.

Freshman Brian Dunham, a computer science major, said he came to CSUN because the tuition was reasonable, but he has seen the affects of rising costs and lower state aid.

As many as 30 students were trying to add in his math class, Dunham said.

CSUN moderates the influx of freshman students by taking fewer students from outside Los Angeles, and making it more difficult for those applicants to be accepted, Hellenbrand said.

Campus administrators have been struggling with the morality of this decisions, because what works institutionally is not socially beneficial, Hellenbrand said.  Driving down numbers could be financially viable, but it also means less students attending college.

According to Hellenbrand, money for classes has been stretched thin, and since admitting more students means more tuition payments, less money comes from the state and the college is left with fewer resources for more students.

CSUN has handled this issue by putting money aside for following semesters, Adams said.  Some of the money for this semester was set aside from last year’s budget from stimulus and federal funds.

Campus officials said the dilemma lies in finding a balance between giving the students as much as it can and still keeping the school afloat.