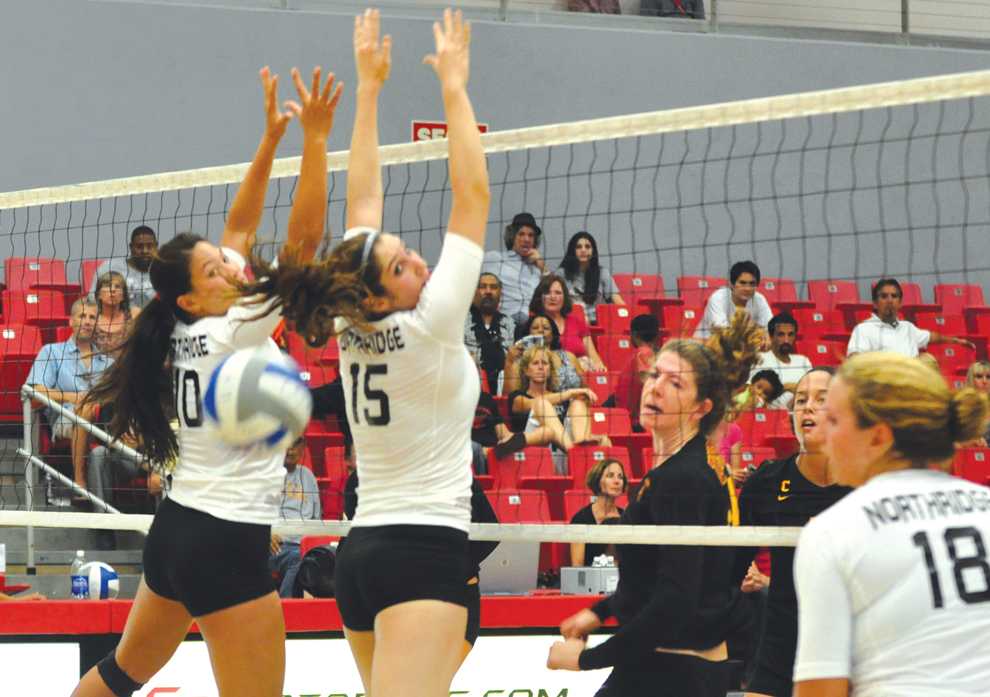 The USC Trojans out-matched and out-classed the Cal State Northridge women’s volleyball team, sweeping them 3-0 in the Matadors’ Tuesday-night home debut, and showing that while CSUN (4-3) is an improved team, it’s not ready to keep up with the likes of No. 9 Southern California yet.

Mahina Haina, “The Flying Hawaiian,” fresh off being named Big West Conference Player of the Week, was grounded against the Trojans (5-2). They were able to keep her and the rest of the Matadors off-balance throughout the night.

“We didn’t pass as well as the last four matches, which takes us out of system,” CSUN head coach Jeff Stork said. “They are a big team. They blocked late, but if you noticed, we out-blocked them.”

The team struggled to find its rhythm against a higher-caliber team. Late spurts were not enough to overcome the Trojans despite the performances of Natalie Allen and Haina. Haina finished the night with eight kills while Allen had seven.

“I thought each match was better and better,” Allen said. “We started out nervous because it’s USC, but other than that, I think we played good.”

Haina struggled in the first set. She only had one kill and the team was visibly anxious. Meanwhile, the well-balanced Trojan offense was firing on all cylinders.

“(Haina) didn’t really have the offensive night that I think she has had in the past and (Allen) actually hit pretty well,” Stork said. “She started off really well, but it declined in the third set.

“I think USC is a very good team. We got beat today, we didn’t lose.”

By the end of the second set, Hannah Schraer was leading the Trojans with seven kills, followed by Alex Jupiter and Katie Fuller with six kills each. Jupiter ended up with 13 kills and 10 digs for the game.

“Our performance was shaky, but it got better, and USC is a great team,” Haina said. “They are ranked high. They know how to play volleyball. They are just a little bigger and faster and stronger then us.”

Northridge showed it’s a spunky team. It fought throughout the night. A scared team would have rolled over at the sight of a powerhouse. The Matadors, led by sparkplugs Cindy Ortiz (three assists, four digs) and Sydney Gedryn (20 assists, six digs), instead made it difficult for USC to get the sweep.

“I got accustomed to (the Trojans’) tendencies” Ortiz said. “I picked up on that and I think we all did a better job picking that up (at the end).”

The Matadors began the third set with confidence and forced USC into a timeout as they led 10-6. CSUN continued the charge and took an 18-17 lead, but USC responded with three consecutive points, forcing the Matadors into a timeout of their own. Northridge ended up dropping the set, 25-21, and the match.

“We had a lot of energy throughout the match. I just came out wanting to play USC,” Allen said. “Mahina did a really good job hitting on the outside and (Gedryn) played amazing back row and the whole team came together and played.”

Stork chose to look at the positives.

“Our team defense is outstanding, so we held them to a low percentage,” Stork said. “But again, we have to back that up by a good offense.”