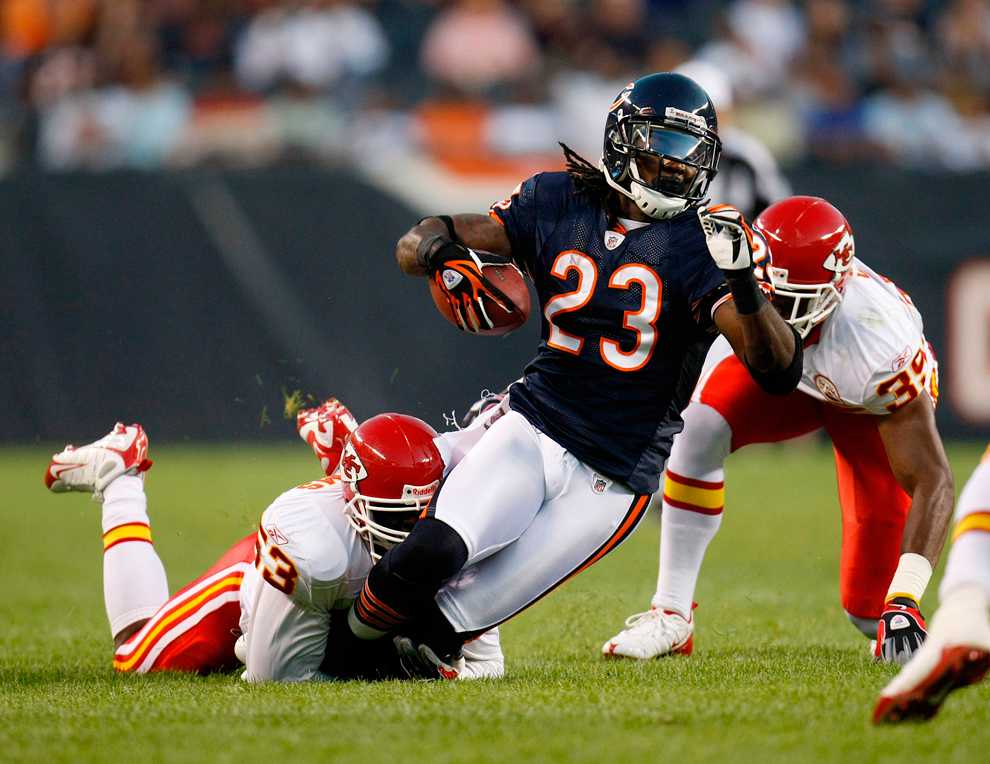 With the new kickoff rule in place, return specialist Devin Hester (23) will see his production decline. Hester is the NFL's all-time leader in kickoff/punt return touchdowns.

Chicago Bears head coach Lovie Smith decided to purposely put his team at a disadvantage during its preseason opener against the Bills on Aug. 13.

Instead of taking the kickoff from the 35-yard line, as a new NFL rule stipulates, he took it from the 30. He did this twice before an NFL official called Soldier Field and told him to stop.

After the game, Smith said he was merely trying to see who could cover kickoffs since kicks from the 35 usually end in touchbacks. However, it’s obvious that Smith instead was rightfully trying to stick it to the league for installing a rule that renders Chicago wide receiver Devin Hester, the most exciting kick returner in the league, almost obsolete.

Recently, the NFL announced two key rule changes: the first being the aforementioned kickoff move from the 30-yard line to the 35, and the other being the prohibition of forcibly hitting a “defenseless player.”

These changes were unanimously approved by owners, but most coaches and players let it be known that they’re highly against them.

While Smith protested by reverting his kickoffs, Steelers linebacker James Harrison went as far as calling the people who make the rules “idiots.”

Ironically, Smith’s supposed protest backfired, because one of his players had to leave the game due to an injury during a kickoff return — which is exactly what the NFL was trying to prevent with the rule change.

But where does it stop? How much protection is too much? What makes a player “defenseless” now? Well, apparently, everything.

According to the new rules, quarterbacks can’t be hit hard while throwing a pass, wide receivers can’t be popped while attempting to catch a pass and ball-carriers slowed down by the grasp of a defender cannot be smacked by another defender, because under all of these conditions, the offensive player is considered “defenseless.”

Players will face penalties, fines and ultimately, suspensions for violations.

Is this the NFL or pee-wee football? Is handicapping the defensive aspect of football in the name of safety the right thing to do?

Absolutely not. Big hits are essential to the game and have been since its inception. Taking them away not only changes the NFL’s gameplay and culture, but it’s also angering fans and players.

Taking these kinds of hits away changes the game in an unprecedented way because it limits what defenders can do, and more importantly, it makes them timid of … you know … actually defending.

Not only that, these rules are unfair to defensive-minded teams like Harrison’s Steelers, which are Super Bowl contenders every year because of their hard-hitting defense.

Furthermore, what’s the point of even having kickoffs, if it’s just going to result in a touchback almost every time? They might as well start the ball on the 20-yard line and skip the entire kickoff process.

The NFL should abandon the new kickoff rule, since the 2010 version of the “safety” rule is enough. It dictates that a player should avoid leading with their helmet, and avoid hitting others in the head. Not only does it provide optimal protection against vicious hits, it makes sense.

Besides, it’s not just hard-hitting linebackers and defensive-minded coaches who are upset. New England’s Bill Belichick and Baltimore’s John Harbaugh are also speaking out against this rule because they feel that virtually eliminating kickoffs changes the game too much and doesn’t give their special teams a chance.

Hester and Cleveland’s Joshua Cribbs thrive during returns, and the changes will lower their statistics and diminish their overall value to the team. Last year, kickoffs accounted for 33 touchdowns. Look for that number to be slashed by more than half this year.

But you know things are bad when kickers, who are typically protected from hard hits anyway, are complaining about the changes.

“I think they’re changing the rules too much,” said Cowboys kicker David Buehler, who had 12 solo tackles on special teams last year, to a Dallas radio show last month. “Football is getting kind of soft.”