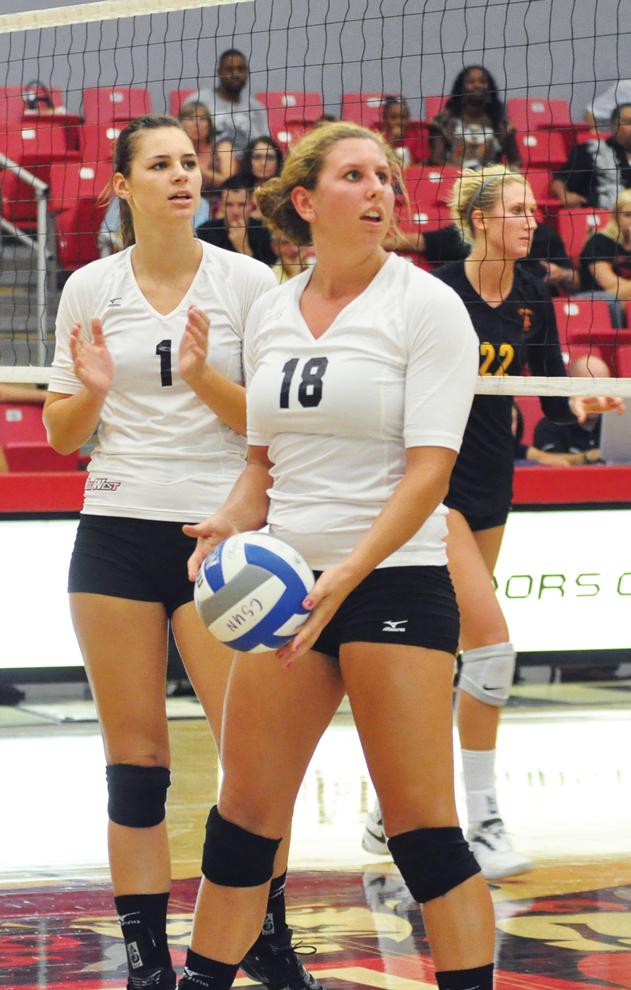 Coming off a hard-fought loss to No. 9 USC, the CSUN women’s volleyball team will look to rebound at the UNLV tournament on Friday and Saturday.

The Matadors will get back on the road and look to repeat last week’s success, when they swept the Sacramento State Invitational and outside hitter Mahina Haina was named MVP.

CSUN will face Eastern Washington on Friday, Southern Utah on Saturday morning and host UNLV later on that evening.

“We won (the 2010 UNLV) tournament, and we are hoping to win again,” opposite hitter Natalie Allen said. “We have good match-ups against all three teams, so we should do good.”

A balanced Trojan attack snapped CSUN’s four-game winning streak on Tuesday as the Matadors lost in straight sets in their home opener at the Matadome. CSUN, third overall in the Big West Conference, is 4-3 entering the weekend.

“We are excited about (the UNLV) tournament,” CSUN head coach Jeff Stork said. “Obviously, we knew that USC was going to be between these two tournaments — it’s a real short turnaround for us.”

Because of the short time between games, the team was not able to review video. Tape review is usually scheduled for Mondays or Tuesdays.

“We’re going to practice tomorrow and get ready for those teams that are coming up,” CSUN libero Cindy Ortiz said. “Coach was telling us that we have pretty good match-ups against them. I think we can do a good job.”

Fresh off a participation on the Texas Tech Invitational, the UNLV Rebels head into the tournament riding a three-game winning streak. After falling behind 2-1 against Northwestern State on Saturday, the Rebels came back and won 3-2, completing a sweep of the invitational. Outside hitters Madeline Westman and Elisa Brochado were named to the All-Tournament Team.

The Matadors’ first rival, the Eastern Washington Eagles, are coming off participating in the Wildcat Classic at Arizona. The Eagles lost two of three matches, falling to Cal State Fullerton and the host Wildcats. Their lone win of the tournament came against Presbyterian College, 3-1, on Friday.

The Southern Utah Thunderbolts, on their part, are tournament-friendly as they’re coming off two straight tournaments, the Crystal Inn Thunderbird Invitational and the North Dakota Volleyball Classic. The Thunderbolts went 1-6 overall in the two tournaments, only managing to get a 3-2 win over Utah State on Aug. 27

CSUN will look to regain its form, especially Haina, the reigning Big West Player of the Week, whom USC held to eight kills.

“We know what we have to do,” she said. “We are just going to go out and play hard in the tournament.”

Stork sees this tournament as an improvement over the Sacramento State one, in which CSUN only lost one set.

“(Eastern Washington and UNLV) have been heavy playoff teams, and we don’t know much about Southern Utah,” he said. “Wednesday and Thursday will be heavy-video days for us.”

The Matadors have been, and will continue to be, without senior and former starter Sam Orlandini. She has been suspended for breaking an unspecified team rule, said a person with knowledge of the situation. Her future with the team is unknown for the time being. Sophomore Sydney Gedryn has been starting in her place so far.