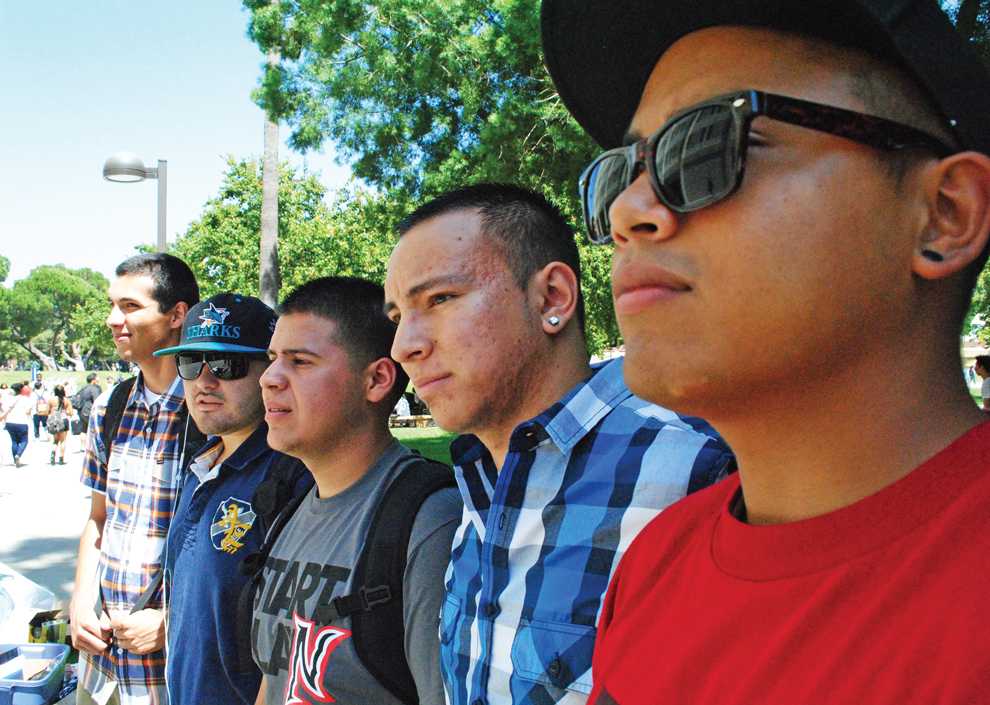 The Hermanos Unidos de CSUN stand in front of their booth on the first day of class, helping lost students find their way around CSUN. "It's great that the numbers have gone up for latinos," said Matt Alcantara, co-chair of the club. Photo Credit: Andres Aguila / Daily Sundial

Latino college enrollment increased 24 percent from 2009 to 2010, making them the largest 18-to-24-year-old minority group on university campuses, according to the Pew Hispanic Center.

“We all need to be educated,” said student Matthew Alcantara, 21. “With Latinos being a majority now, I think that’s great.”

Alcantara, a health administration major, is the first one in his family to go to college. He will graduate next spring, an milestone, he said, some his high school friends will not reach.

In his neighborhood, Alcantara said, students graduating high school focus more on working to support their families, not continuing their education.

But Alcantara’s parents immigrated from Peru and instilled a different kind of work ethic.

“Their main focus since I was young was to get educated, become a professional and make a difference,” Alcantara said.

Latinos were the largest group on CSUN’s campus in Fall 2010, accounting for 31.4 percent, according to the school’s Institutional Research. White students come in second at 30 percent of the student population.

Latinos make up about 40 percent of the undergraduate population at Northridge and 18.2 percent are in a graduate program, making them the largest minority group in both categories, ahead of Asian Americans, who come in at 11.4 percent for undergraduates and10 percent for graduate students.

While the school’s Latino numbers are encouraging, David Rodriguez, Chicano/a Studies department chair, said he is concerned about the amount of Latinos not moving on to universities.

In October 2010, 54 percent of Latinos students were in four-year schools, compared to 63 percent of black students and 78 percent of Asian students, accrording to the Chronicle of Higher Education.

“It’s one thing to get a bunch of (Latino) students in a community college,” Rodriguez said. “But you’re going to need more than an AA degree to be successful.”

CSUN has seen a 4 percent dip in the number of Latino students enrolled in a graduate program, according to CSUN’s Institutional Research.

“We’re not getting enough into the graduate levels,” Rodriguez said.

Rocio Mejia, junior health education major, is the first in her family to attend college and one of the few in her circle of friends to make it to a four-year school.

“Most of my friends go to community college,” she said. “Some of them didn’t even go to college.”

The perception of Latinos from other groups is the biggest concern for Mejia, she said.

“It makes us look bad if Latinos don’t go to college as much as other (ethnicities),” Mejia said.

A rise in the U.S. Latino population could be a reason for the higher enrollment, Rodriguez said. The Pew Hispanic report noted Latinos make up 19 percent of the nation’s young adult demographic, up from five percent in 1972.

Rodriguez said these figures may not translate to success at the college level, but in this struggling economy there is potential for an attitude shift within young Latinos to place a higher demand on education.

“Right now, you need everyone educated,” he said.