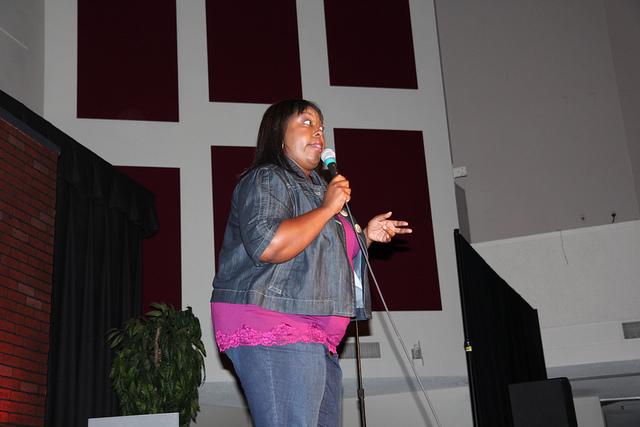 Comedian and actress Loni Love talked about food, success and love during her standup routine at the University Student Union's "Got Jokes" comedy show in the Northridge Center Friday night. Photo courtesy of Kevin Lizarraga

“The show was a big success,” said Amari Canada, public relations major and event coordinator. “Even the big comedians sat with the audience to watch the lineup, instead of staying backstage.”

University Student Union, along with Canada, planned the event, choosing a diverse lineup to reflect the diversity of the campus.

Junior Nicoyia Hurt, a health science major, enjoyed the show and would love to go to another CSUN comedy event.

“Events like these really make me appreciative of CSUN and being a college student,” Hurt said.

However, some students thought that comedian and actor Pauly Shore’s performance was rude and strange.

“Pauly shore was terrible,” said Junior Brandon Blueford, a cinema and television arts (CTVA) major. “He seemed like he was under the influence.”

The audience was ecstatic that comedian and actress Love came to their campus, Blueford said. Love, who can be seen on the E! channel’s popular talk show, Chelsea Lately, gave three bits of advice for success to students during her stand up.

Dorward is already following her advice. The USU chose him for the opening act because he won their online contest by submitting a video of himself telling a joke.

Friday’s audience was the biggest crowd the amateur comic has ever performed for.

“It was awesome to open for these big comedians,” said Dorward. “And it’s cool to perform for fellow students.”

Comedian Ron G., who hosted the show, enjoyed Dorward’s act. He says comedy is very addictive, but is a difficult path to follow.

“You can’t choose comedy,” said G. “Comedy has to choose you.”