Anthropology student becomes an archaeologist for the summer 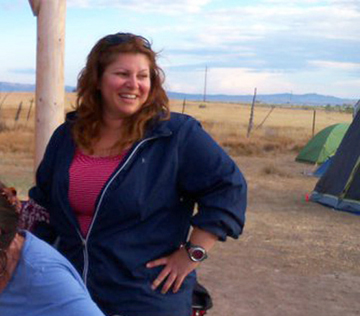 Hours go by in the hot summer sun, digging and screening for bits and pieces of archaeological gold.  Fieldwork for the day comes to a close and team members, caked with sweat and dirt, seek relief from the desert heat with sun-showers, which are merely 5-gallon hanging solar insulated bags of water.

“We laughed about our misery,” said Silva Boghosian, as she described the “full-on primitive camping” she experienced during her first archaeological fieldwork class in Utah this summer.

Boghosian, 35, senior anthropology major, has been in love with archaeology since childhood.

Born and raised in Glendale, she visited the Middle East during her youth where she grew an insatiable curiosity for the culture.

Every time she would visit a museum and ask questions, she said the only answer she would get was that’s how it has always been.  For Boghosian, who grew up favoring social studies and science, and “anything that related to true facts,” that answer wasn’t enough.

Boghosian, who has now dedicated all her time to going back to school, had spent about 14 years after graduating high school in Fresno being a travel agent, bookkeeper, and more recently, a licensed cosmetologist.

“It all failed me,” Boghosian said, describing her career-changing experiences.  “So I went to my childhood dream.”

Before transferring to CSUN, Boghosian started taking classes at Pasadena City College, which is where she signed up for the summer archaeology program.

The field program, conducted by Mari A. Pritchard-Parker, took place on the Great Basin, where students spent about five hours in the field digging for artifacts and about five hours of lab doing data entry, and washing, weighing, and analyzing those artifacts.

In between fieldwork and lab, students also had about five hours of free time to do laundry, rearrange their tents, go into town, shop for groceries, visit other museums and monuments in the area, or drive about 40 miles to the nearby lake to take showers and use the facilities, where Boghosian joked there was only one park bench that you could get cell phone service.

“We went to the Fremont Museum, saw the frescos in Utah—there was a lot of driving,” Boghosian said.  “The days there was something to do, we drove about 320 miles.”

Though their main camp was about a half a mile from their field site, Boghosian and her fellow archaeologists also collected obsidian from nearby quarries.

Boghosian, who stayed in the program for both summer sessions, also had a chance to do fieldwork at one of the Japanese internment camps.

“It was the first time Mari’s done this,” Boghosian said.  “We worked with the Bureau of Land Management and worked with real archaeologists.”

The entire experience, “allowed me to network with other archaeologists and work in a group,” Boghosian said, which she admits she was not used to doing.

“You have to draw the line yourself when you can’t find it,” she said.  “My peers around me are going to be my longtime friends.”

One of the other challenges Boghosian faced at the beginning of her first camping and archaeological trip was, “learning to let go,” she said.  “The first week I kept constantly checking my watch.  This allowed me to view myself and let go and let nature take its course.”

Boghosian admits this was hard to do, especially since there was no television at the camp, and “my escape is TV.”

Although for next summer she hopes to do fieldwork in the Middle East, Boghosian said she wouldn’t be opposed to doing fieldwork again in Utah. In the meantime, she said she’ll continue her studies in anthropology, tackling classes like Linguistics and taking the GRE to finally earn  her master’s degree.

“I’m crossing one thing off at a time that I fear the most,” Boghosian said.

“Taking this field class really emphasized that this is exactly where I want to be,” Boghosian said.  “Even if I don’t get really successful, I fulfilled my dream.”