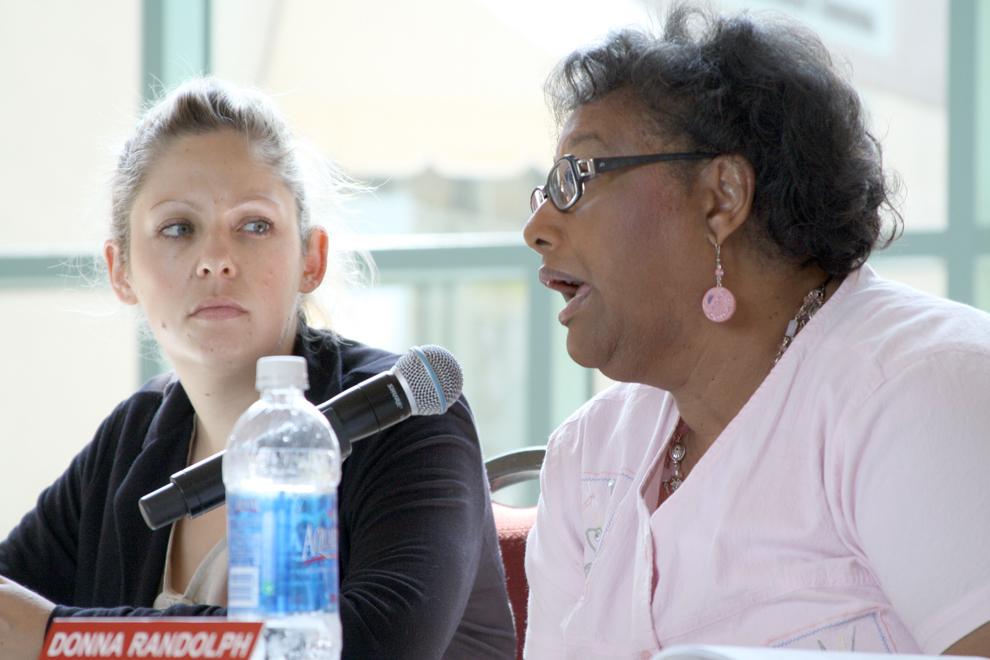 Grad student senators Ela Heinz (left) and Donna Randolph (right) are at the Associated Students meeting in the Grand Salon at the USU on Tuesday. Randolph explains why her class schedule conflicts with the hours A.S. senators are required to devote to the senate. Photo Credit: Mariela Molina / Visual Editor

Emotions ran high at Tuesday’s Associated Students (AS) meeting after the board failed to pass an amendment that would allow graduate students to leave meetings an hour early to accommodate class schedules.

Standing rules require senators to be available from 2 p.m. to 5 p.m. on Tuesdays for their meetings, unintentionally excluding some graduate student representatives whose classes start at 4 p.m.

“I can’t serve (students) effectively because you can’t allow me to go to class and that’s where the students are,” said Donna Raldolph, one of two graduate senators and the only one with a schedule conflict.

Originally the proposed measure called to suspend the standing rules for this school year exclusively for Senator Randolph.

If the currently rules are left unchanged, Randolph would have to give up her senate seat or drop out of her cohort, a program that assigns students their schedules, which cannot be changed.

“I would ask the board to allow this senator to complete her obligations,” said Senator Pamela Mnyandu. “It should be allowable and acceptable.”

Senators reacted to the proposition with mixed reviews. Although some agreed with Mnyandu and Randolph, others said if senators left early students would be poorly represented.

“It’s difficult to be consistent and perform well without being present,” said Senator William Ryder.

President Amanda Flavin recommended a new proposition targeted to all graduate students and not solely for Randolph after the original proposition failed 14-5.

Fifty minutes and two recesses later, senators continued to struggle between the language of the amended proposal, claiming that it violated the AS constitution.

“I have to live up to my student obligations,” said Heine. “Isn’t it better to have partial than no representation at all?”

Flavin terminated discussion after senators continued to amend the proposition.

“I made the choice because it was a roundabout discussion,” said Flavin. “It didn’t create a good use of time.”

Randolph left the meeting early to attend her cohort.

“There was a motion in effect and all they did was go around,” she said.

A.S. will not revisit the issue unless a senator drafts a new proposal by Thursday at noon.