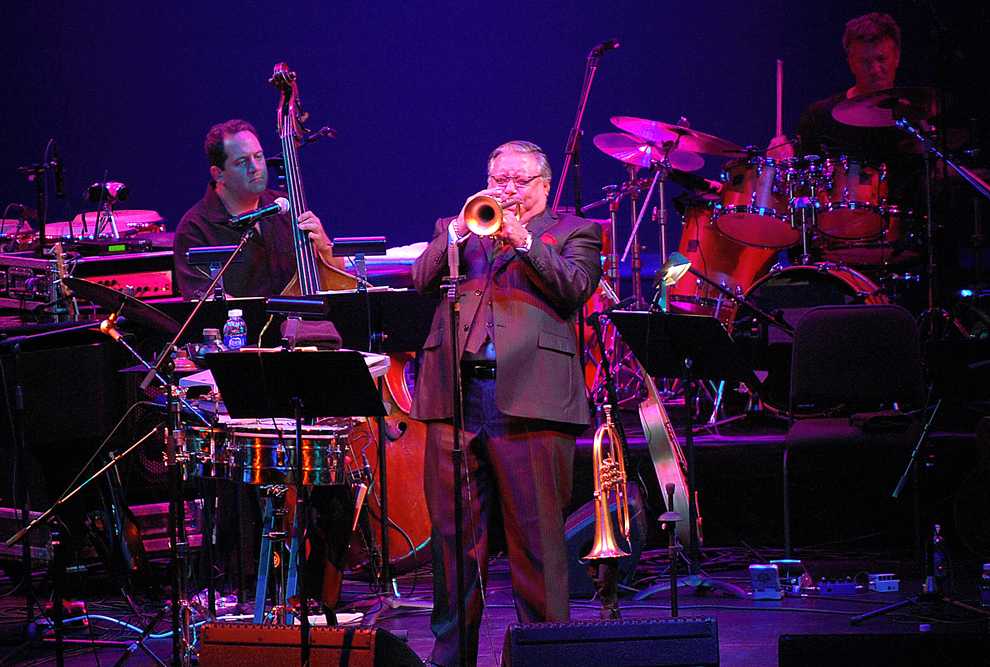 Arturo Sandoval and his band opened the Valley Performing Arts Center 2011/2012 season with Latin Jazz music on Saturday. Other guest lectures and performers who will be making an appearance at the VPAC this month include, Jaime Lee Curtis and The National Acrobats of The People's Republic of China. Herber Lovato / Senior Photographer

Sandoval spent the majority of the two and a half hour performance making jokes and insisting the audience relax and even encouraging them to talk amongst themselves.

Sandoval’s performance kicked off the second season at the VPAC. He was joined on onstage by special guest actor Andy García.

“The performance went really well, people had a great time,” said Robert Bucker, executive director of the VPAC. “There were two elements that were important: the homage to Dizzy Gillespie, and his Latin jazz. It’s different than American jazz.”

The first hour and a half of the performance consisted mainly of classical and jazz music, including a tribute to jazz genius Dizzy Gillespie, who died in 1993. Each song was prefaced by a joke and then a slightly more serious introduction.

“Let the people who didn’t come here tonight know what they missed,” Sandoval said after the first song. “You don’t have to be quiet. Talk, clap, enjoy yourselves.”

Following intermission, the show took on a distinctly Latin flavor as the band was joined by singer Becky Martin, who sang a rendition of “Bésame Mucho.” Together, the two debuted a new song off Sandoval’s upcoming album, due out at the end of the year. “Every Day I Think of You” is dedicated to Dizzy Gillespie and is based on the time and music the two shared.

“It says in the program that now I’m supposed to do a tribute to Dizzy Gillespie – that’s wrong,” Sandoval said. “Every single note I played for the last 37 years had been dedicated to Dizzy, my hero, my mentor and my friend.”

After the ballad, Sandoval said, “It’s so incredible when you become a good, close friend to your hero. Some people die looking foot a friend like that. I was lucky.”

First-time VPAC visitor Ariel Sholkalpper was impressed by the acoustics of the theater.

“I’ve been a fan of Arturo for awhile,” Sholkalpper said. “I had never seen him perform live. It was wonderful.”

“Arturo is amazing, he plays each instrument superbly,” he said.