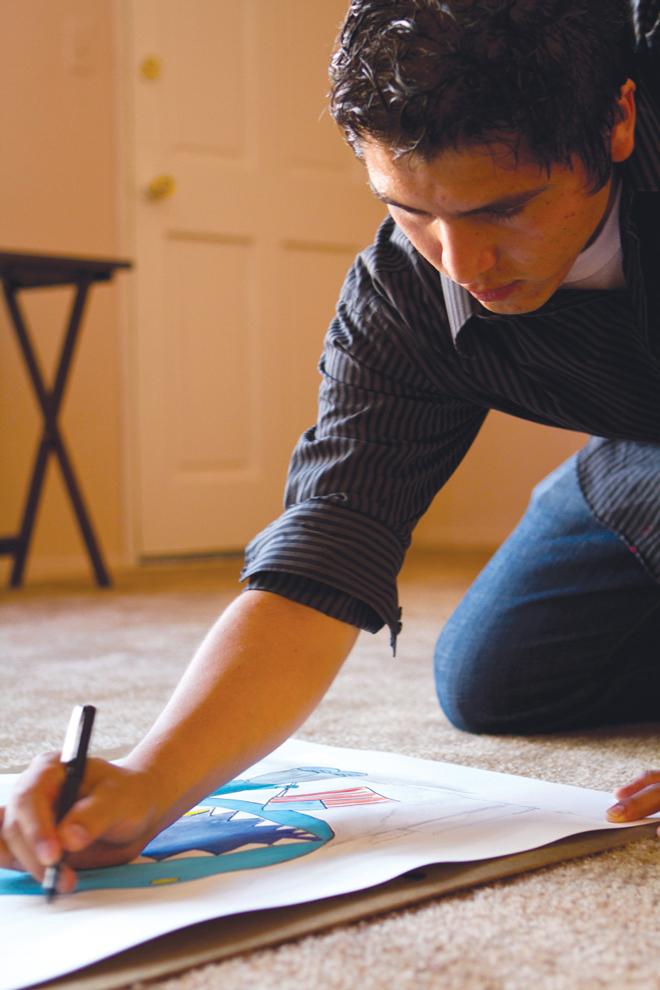 In order to pay his tuition, Victor Zuniga works two jobs - one as a retail salesman and the other as a freelance graphic artist. He estimates that he works 45 to 60 hours a week to cover his tuition and expenses. Photo Credit: Kat Russell / Daily Sundial

Students’ wallets, bank accounts and trust funds have felt the tightening grip of tuition costs. Many are scrambling to make ends meet after a 22 percent tuition increase raised CSU’s price tag for the Fall semester. At CSUN, undergraduate students pay $6,488 per year, while graduates pay $7,754.

SolRuby Mendoza, 23, has felt the burden of rising tuition costs.

Extra money could have gone to pay for bills and cover the items she needs for school, like textbooks and gas money, Mendoza said.

She commutes 45 minutes to an hour traveling to and from campus, resulting in an awkward class schedule which she said keeps her from holding a real job.

Mendoza’s case is not unique, though.

Ninety-five percent of CSUN students commute to campus, according to a report from CSUN’s Institute for Sustainability. Many of those students must pay rent to live off campus, gas or monthly transit passes on top of school supplies and textbooks.

To compensate, Mendoza has become, in her words, a jack of all trades. She works an array of domestic gigs, from babysitting to plant sitting, along with tutoring and practicing nail tech.

Almost 40 percent of workers aged 16-24 are full-time college students, according to the Bureau of Labor Statistics 2010 report.

The majority of these students work retail or hospitality jobs, as opposed to research assistant or educational jobs, according to the Bureau’s 2011 youth employment survey.

Despite Mendoza’s struggle, she was attracted to CSUN because it was the most affordable four-year option.

“You can argue that tuition here isn’t as expensive at other universities, but there’s a reason I’m not at another university,” Mendoza said.

Mendoza took out a loan to help ease tuition costs, and she’s not the only one.

Ohannes Atamian, a 27-year-old transfer student, is dealing with the sudden jump in tuition, which is much higher than that of the community college he previously attended.

“I was able to work and pay for all of my community college,” Atamian said.  “But since transferring, I’ve had to accept the loans I was offered to pay for classes.”

Like Mendoza, Atamian lives at home and considers himself lucky that he does not have to pay rent.

But as a commuter, Atamian said purchasing the university’s $180 semester parking pass was also a big price jump from his last school.

Currently unemployed, Atamian applied for and is hoping to earn scholarships.

CSU scholarships are awarded to small groups of students studying in different areas for research, achievements or above par grades.

Some of these awards amount up to $6,000, which is slightly more than the average cost of a CSU campus’ tuition, according to a report by California Colleges.

One year of living off-campus, including tuition, room and board, and materials costs about $21,401, the report noted.

Not all CSU students qualify for state-funded scholarships, however.

CSUN is home to a community of AB 540 students, undocumented students who pay in-state tuition and are not eligible to receive federal financial aid.

Legislators voted 51-21 on Sept. 2 to pass the second half of the California Dream Act, which would allow undocumented students to receive state financial aid, including fee waivers, institutional aid and Cal Grants if funds remain after residents receive their rewards.

Zúñiga works two jobs for 40 to 50 hours a week to support himself and pay for school.

Along with his job at the mall selling T-shirts, he is a freelance graphic designer.

Zúñiga has worked for published authors designing book covers, and created flyers supporting the Dream Act.  He is also contracted to originate art for businesses.

“The tuition increase has been hard as an AB 540 student and a graphic designer,”  Zúñiga said. “I can’t take any loans from the bank, so I’ve had to work more hours at the mall, and also take as many projects as I can.”

Since he relies on his graphic-design work to continue to pay for college, Zúñiga must invest in materials, software and computers. He said the $294 increase in tuition was money he could have put toward art equipment.

In order to lower housing costs, he shares an apartment with three other roommates, as he no longer lives at his parents’ home. Two months ago, Zúñiga was sharing a place with seven roommates to split costs.

Zúñiga’s courses require him to buy expensive design materials on top of his tuition and textbooks, he said.

“I can apply to some scholarships, but I don’t put much hope into them,” Zúñiga said.