M-Soccer: Matadors try to bounce back at Cal State Bakersfield 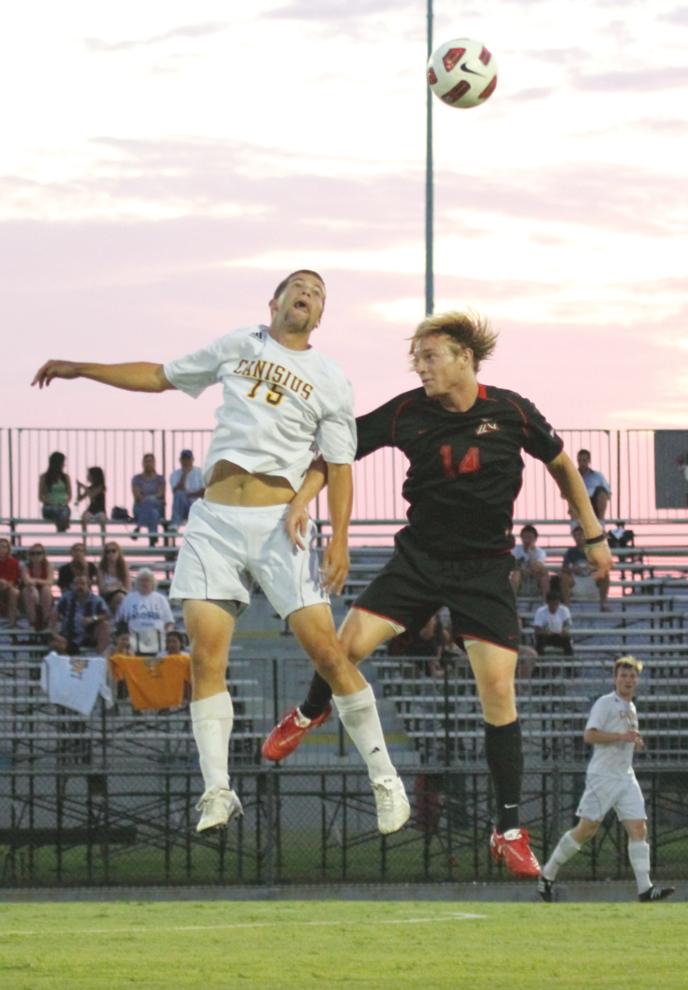 Chris Smith (right) and the Matadors travel up north to face the Roadrunners in a non-conference match tonight. CSUN is 22-0 in games against Cal State Bakersfield. Photo Credit: Simon Gambaryan / Daily Sundial

After letting New Mexico score three goals in 70 seconds on Sunday, the Matadors (2-3) are looking to regain control of their season in their road match against Cal State Bakersfield (2-0-1) tonight (7 p.m.).
On paper, CSUB stacks up to be a tough team to beat, but CSUN head coach Terry Davila believes both teams are evenly-matched.

“The only advantage (CSUB) have on us is that they’re at home,” Davila said.

CSUN has to worry about two key players from Bakersfield: midfielder Jesus Sanchez, who scored eight goals and had two assists last season, and forward Gyasi Zardes, who had an equally impressive 2010 season with five goals and seven assists. Zardes already has six goals and an assist in 2011.

The Lobos put CSUN in an unenviable position on Sunday, but showed the Matadors areas where they need development.

“New Mexico’s defense is very good, in the way they keep the ball offensively,” Davila said. “That made us play defense a lot. When a team’s that good offensively, they make you defend.”

Playing on their heels for most of the match led the Matadors to have a breakdown.

“We were so focused for 80 minutes that I think that (first) goal kind of broke us down mentally,” CSUN goalkeeper Michael Abalos said. “I think we showed a little bit of inexperience.”
Abalos added he couldn’t recall the last time he had three goals scored on him in that short amount of time.

“Within the span of three minutes, it kind of felt surreal,” he said. “I’m still pretty bitter about it.”

Davila pointed out that most of their losses this season have come late in the game. CSUN’s first two losses, against UNLV and Akron, happened in extra minutes. The Rebels were able to win in the match’s first overtime while Akron won in overtime No. 2.

In terms of scoring, CSUN has scored five of its eight 2011 goals in the second half of matches. Though the Matadors scored first on Sunday, they would have needed a Lobo-like scoring-burst to be able to come back against New Mexico.

Matador forward Edwin Rivas took three shots and scored once during Friday’s 3-0 win over Missouri State, but failed to tally any shots against the Lobos.

Thursday’s match with CSUB will be the 23rd meeting between the teams. The Matadors are more than dominating the series with a record of 22-0 .

The Roadrunners finished first in the Pacific division of the MPSF with a record of 11-6-3 last year and have yet to lose a game this season.

CSUN midfielder Chris Smith thinks the Matadors’ losses have made them mature.

“The tough games have helped us out by (letting us know) who can help us out,” he said.

Smith adds that playing challenging opponents has given the team an idea of where they should be.

The Matadors have done well defensively, making sure their opposition does not score on them early in the game, but Davila feels they need to maintain focus for the entire match.

“You don’t come out to any game trying to plan to get players behind the ball,” Davila said. “What you’re trying to do is get your lines on top of theirs, and hopefully we’ll be able to do that against Bakersfield. I thought that New Mexico’s line dominated ours.”