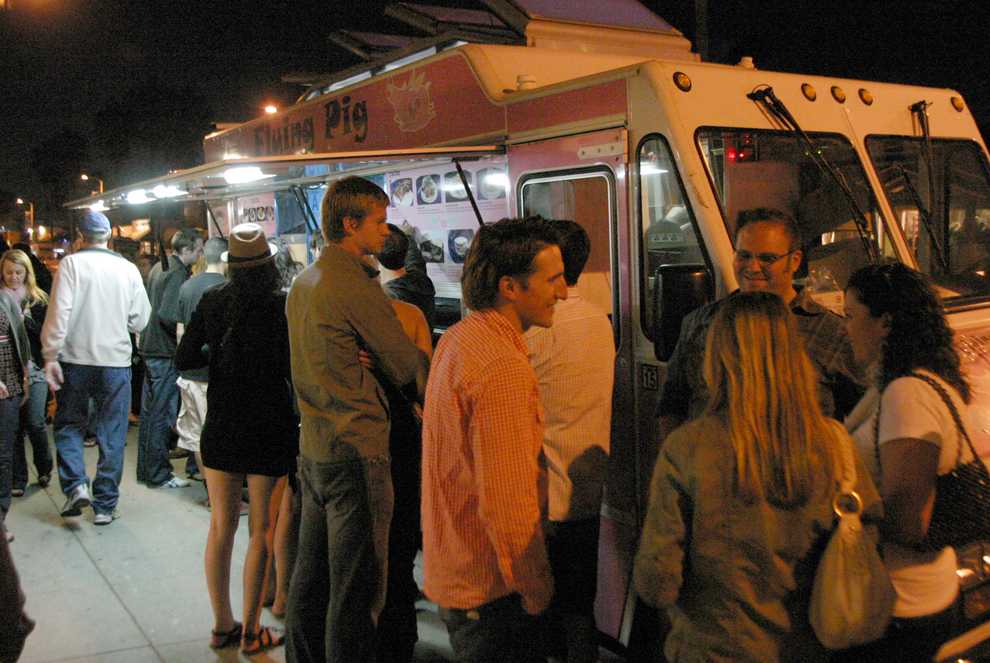 I don’t understand the craze over most fusion-food trucks, part of the growing “roach-coach” takeover of Los Angeles. With long lines, less-than-exciting attempts at food fusion and deceptively high prices for snack-sized menu items, I’m skeptical of most.

Pigs don’t fly, and the Flying Pig food truck is no exception.

Following on the heels (or should I say wheels) of the Kogi taco truck – the extremely popular Korean-Mexican fusion vendor that started it all – the Flying Pig has been featured by major media, such as LA Weekly, NY Times and Oprah. To avoid long lines at the Flying Pig, the food truck’s owner, Chef Joe Kim, opened a brick-and-mortar restaurant in the heart of Little Tokyo in July.

I waited in line for about 30 minutes to pay more than $14 for four items — one of its famous pork belly buns and three “tacos” — which left my tongue confused and my stomach still growling.

The pork belly bun, a Chinese Bao bun lightly stuffed with braised pork, red onion escabeche, pickled sesame cucumber and “death sauce,” is about the size of a fist and costs $4. The only deadly thing about this item is the amount of money wasted on not-so-great food.

The tacos were more satisfying, but at $3 each, I’d rather go to Taco Bell. You can choose from carne asada, spicy pork, tamarind duck, smoked chicken or peanut butter carnitas, but the only item that’s really worth trying is the duck taco, which involves duck confit topped with red beets, toasted almonds, radish sprouts, mandarin orange and tamarind gravy.

The Flying Pig’s trough does not serve “the perfect blend of Asian & Pacific Rim flavors with French technique,” but it does offer mediocre Asian slop at sky-high prices.