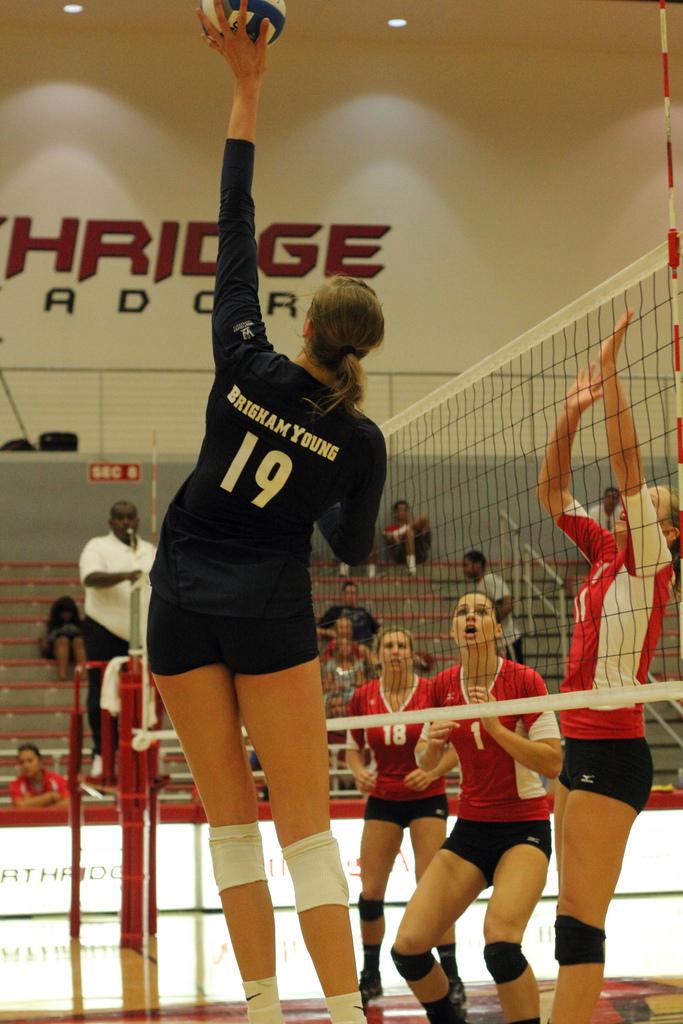 BYU and its impressive 10-3 record entered the Matadome Saturday afternoon on the back end of a six-game road trip along with a heartbreaking defeat the prior night at Cal State Fullerton.

All signs pointed towards a weary Cougar team and a solid opportunity for the well-rested Cal State Northridge women’s volleyball team, which hadn’t played since Monday night, to come out of the match with a win.

Lately, CSUN has had a tendency to start slow, and this match was no different. The Matadors fell behind quickly in a forgettable first set and played catch-up throughout the second as BYU went up 2-0 going into intermission. The third set was a different story.

Northridge jumped to an early 9-3 lead in the set before the Cougars came roaring back to score the next five points and pull within 9-8, forcing the Matadors to take a timeout. CSUN responded with a run of its own, however, and extended its lead to 21-13 thanks to timely-hitting by freshman Casey Hinger and outside hitter Mahina Haina.

Haina, who had five kills through two sets, doubled her kill count to 10 by the end of the third.

The sophomore outside hitter herself made sure the Matadors took the set as her potent kill gave CSUN the 25-16 third-set win and cut BYU’s lead in half.

“We served in much better and we played better as a team,” Haina said. “Everything was clicking. When you’re on that roll it’s easy, it was a good (third-set) win in
that sense.”

However, it looked as if the Matadors ran out of gas from that point on as their remarkable third set was followed by a 25-17 fourth-set defeat.

“We may have relaxed a little bit more,” CSUN head coach Jeff Stork said. “You have to give credit to BYU, they’re a good team and they kept us out of rhythm. Our girls played their hearts out and the area we have to adjust had nothing to do with BYU.”

The giant BYU front-line was bigger and stronger than CSUN’s.

BYU six-foot-six opposite hitter Jennifer Hamson had an impressive start in the first set with 10 kills and six digs. Kathryn LeCheminant, who hit 1.000 in the first, also continued her accurate hitting with a .857 percentage in the second set.

“(Hamson)’s a good player, but we are all good players too,” Hinger said. “We can put it down as well as any six-foot-six player can.”

The Matadors complemented each other throughout the match with a balanced attack that included a team-high 13 kills by Haina. Hinger had eight kills and Natalie Allen had seven while Sydney Gedryn had a game-high 39 assists.

CSUN opens its Big-West schedule at UC Riverside on Saturday.

“We tried hard, we’re proud and ready to go to the next match,” Hinger said.