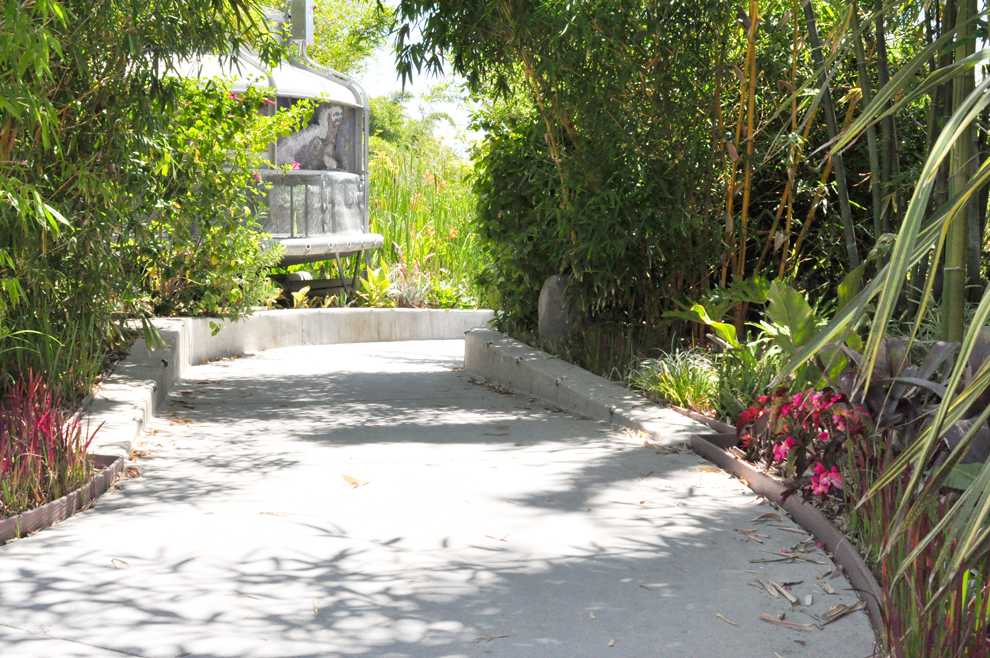 The CSUN subtropical rain forest project was the first of its kind at a university in the United States. According to Physical Plant Management, the site is projected to save the campus $14.5 mil dollars over 25 years. Photo Credit: Irene Moore / Daily Sundial

It was only a lunch break.  Eating on the future grounds of CSUN’s rain forest may have seemed uneventful to the workers that built the 13,000 square foot tropical oasis.  Little did they know they accidentally transplanted a tiny seed that would soon grow out of control in an environment that was never designed for it.

“If you’re coming from the west end, the first cooling tower is where the guys would stop and eat lunch during construction, and next thing you know there’s a small tomato bush that grows into a big tomato bush and finally envelops about half of the cooling tower,” said Lynn Wiegers, Physical Plant Management (PPM) director of engineering services.

Wiegers said that tomato seed fell during the workers lunch as one of the men were eating. It took root and flourished.

In 2009, a CSUN student design team and PPM along with other faculty, designed a fuel cell power plant that would reside next to a man-made rain forest as a self-sustainable system that would establish CSUN as one of the leaders in sustainable systems for all academic institutions worldwide.

Unfortunately, for the tomato plant, it didn’t survive. However, the other plants that the rain forest was intended for found an utopia of carbon dioxide, sunlight, and water to thrive on.

The plan was to build a fuel cell with a satellite chiller plant that would provide nearly 25 percent of the campus’ energy and recycle water from the fuel cell to produce carbon dioxide in cooling towers that would promote plant growth while saving the university $14.5 million over 25 years.

The student design team, with then executive director of PPM, Tom Brown, spent years researching and designing the project.

Brown has since retired and the torch has been handed to PPM landscape and grounds manager, Jim Logsdon, who now maintains the site.

“There’s minimal maintenance,” said Logsdon, “It’s sort of a self-sustaining environment. That was the whole point behind it initially, not to plant something we would have to spend a lot of man hours manipulating.”

Both Logsdon and Wiegers consider the project a success. They said it has minimized the carbon footprint of the campus while supplying its own irrigation system for the rain forest and producing energy for the campus.

The fuel cell produces 9,000 gallons of water each day and through a gravity flow system produces carbon dioxide for the rain forest.

To assist with the collection of carbon dioxide, biochar, a soil supplement, was injected into the soil, which pulled carbon dioxide from the atmosphere to the ground nourishing plant life even further.

The project won several awards over the years and has gained recognition.

“When the fuel cell was christened it was the eleventh facility of that size or larger in the world and first at a university,” said Wiegers. “It really shot us to the forefront over other schools.  CSUN is always leading in projects of this nature.”

Utility companies have taken notice. Over the last two years they have asked to tour the tropical oasis and fuel cell, expressing interest in its 45 percent energy efficiency with a theoretical potential of 85 percent combined (heat and power) after heat recovery.
The site’s appearance has also changed.

What started out as 108 tropical plant species is now 140 species, with the occasional accidental new growth from bird droppings that deposit new seeds. The droppings often spawn new invasive plants similar to the tomato plant that found its way into the grounds two years ago. The initial, intended, plants have grown and made the terrain thick with color.

“The more research that I did, the more I recognized that others (plant species) would live and work in there,” said Logsdon.

Currently, there are no plans to expand the rain forest as the humidity and carbon dioxide the plants require for growth would not be available elsewhere on campus without the direct connection to the fuel cell.

CSUN’s rain forest is a mark of green achievement for the campus.