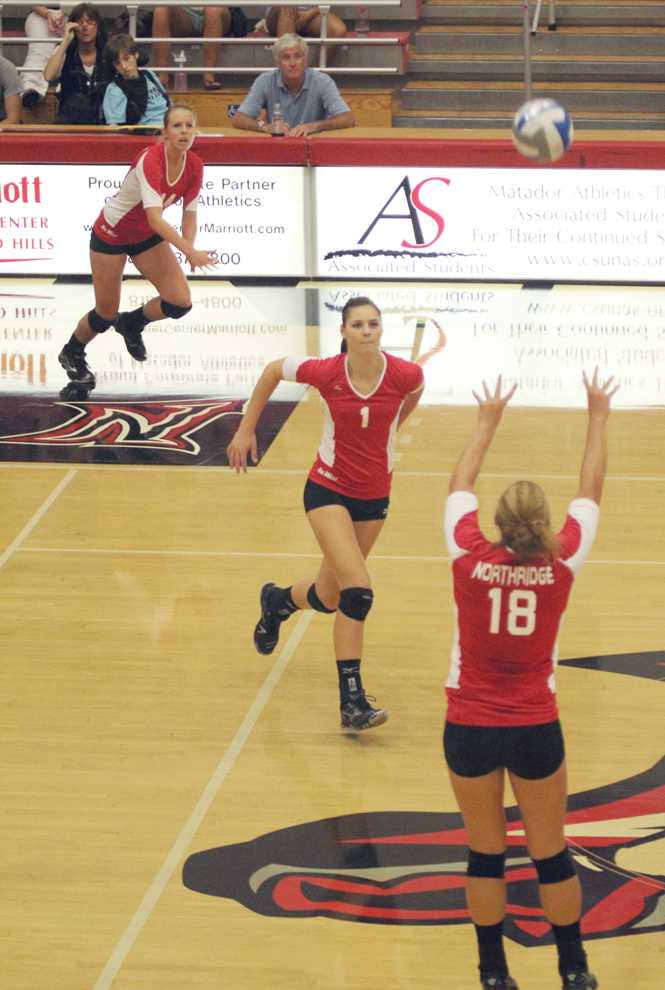 Having lost two straight games heading into Big-West-Conference play does not seem to faze the Matadors (6-6).

CSUN dropped games to UCLA and BYU last week, but the setbacks apparently didn’t do much to diminish its players’ confidence. Freshman middle blocker Casey Hinger is actually quite certain their next game, on the road against UC Riverside, will be a win.

“We’re fighting hard and that’s what counts,” Hinger said following CSUN’s 3-1 home loss to BYU on Saturday. “I can’t wait for our first conference game at UCR. I can’t wait to go beat them.”

CSUN looked quite capable during Saturday’s third set, dominating the Cougars behind opposite hitter Mahina Haina’s five kills. Outside of that, however, the Matadors were one step behind BYU the whole way. CSUN hit .130 for the game.

Even during their will-imposing third-set win, the Matadors found themselves in an undesirable position. Following a 9-3 run to start the set, BYU scored five straight points to get within a point. It was a similar scenario from the game against No. 7 UCLA on Sept. 12 in which CSUN held multiple leads only to have the Bruins snatch the lead back every time.

Against the Cougars, however, CSUN responded. The Matadors scored the next four points and cruised to a 25-16 win.

Focusing on the positives will be key to come out with a win on Saturday at Riverside, CSUN libero Cindy Ortiz said.

“We just got to shake it off and move on to the next game,” Ortiz said. “Can’t dwell on the last game and keep moving forward.”

It’s getting hot in here

The first thing fans felt as they entered the Matadome for CSUN’s game against BYU: the temperature elevating.

It’s no secret the Matadome’s long lacked an air-conditioning system, and with Northridge reaching the high 80’s temperature-wise on Saturday, CSUN and its fans had to deal with the irksome heat.

Not everyone minded it, though.

“I like it. When you come off, you’re still warm,” Hinger said. “You don’t have to go into the game cold.

Ortiz actually sees the hot gym as part of the home court advantage.

“It’s an advantage for us because we play in there everyday,” she said. “But when it’s hot, it’s hot, you just got to play.”

But would she mind it if it wasn’t so warm in there all the time?

Outside hitter Mariah Counts didn’t play during CSUN’s first set vs. BYU. She then saw limited action in the second and third set before finally getting considerable playing time in the fourth.

CSUN head coach Jeff Stork’s explanation for this: her serving.

“At one point we weren’t scoring in the rotation,” Stork said. “We put Mariah in and she had a run of three or four points. She’s a good, confident server and we look to put her in that rotation to score points for us.”

Counts, who has appeared in eight of the Matadors’ 12 games, had two digs, an ace and two serving errors for the game.

After appearing in a career-high 31 matches during the 2010 season, senior setter Sam Orlandini hasn’t seen a minute of action this season.

According to a team source, Orlandini broke a team rule, resulting in her sidelining.

When asked to explain the circumstances of Orlandini’s suspension, Stork declined comment.