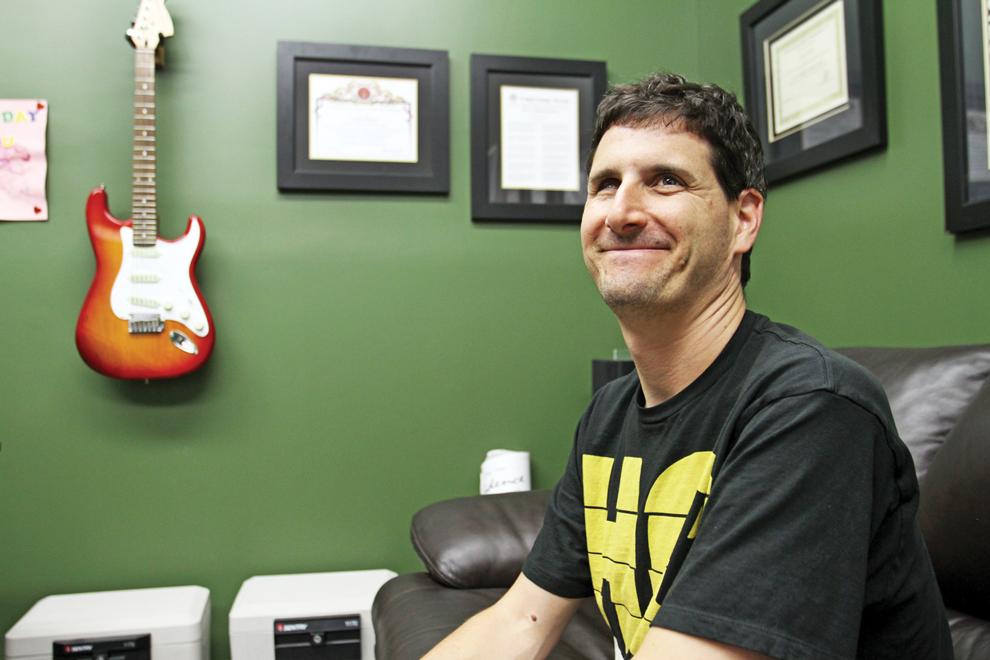 An exercise mat and a punching bag are located in the back of the record label office for sessions of Krav Maga training. Hundreds of stacked boxes store CDs and other music items in the storage room. A guitar signed by Elvis Costello is hung on the wall of the record label founder’s office. Vinyl records, music posters and government recognition certificates for charity work adorn the space, alongside the artwork given to him by his young daughter.

All of this would not have been possible if it was not for a turning point that shaped Louis Posen’s life.

At 19 years old, Posen had dreams to be part of the film industry. He was studying film at Cal State Northridge at the time, with a job as a camera assistant for music videos and movies. His plan was to spend his life looking through a lens capturing what he loved.

However, his best laid plans of becoming a future film director changed.

A trip to the optometrist’s office in 1990 would test his persistence. He was diagnosed with retinitis pigmentosa (RP), a genetic eye condition that eventually leads to incurable blindness. However, it did not stop him.

“If it’s not affecting me now, why should I spend my time wallowing in it?” Posen recalled about the early stages of the diagnosis.

Three years later, a botched procedure that was supposed to help his vision permanently detached his retina and left him completely blind in his right eye.

“I’m not one to ask the question, ‘What if?’” Posen said. “I don’t find that has much positive effect, so I usually ask myself, ‘What can I do? What should I do?’”

In 1993, he stepped away from the camera. With $1,000 in his pocket and no tangible business plan, he bought the book “How to Run an Independent Record Label,” and soon, Hopeless Records was created.

“I saw a vision for a business I had never noticed before,” said Posen.

Posen is now 40. Currently married, and father of 4-year-old daughter Ellie, he runs the record label out of Van Nuys.

Hopeless Records has been home to an array of rock bands like All Time Low, Avenged Sevenfold, Yellowcard and Thrice.

The title of the label is not some ironic take on his struggles, though he admits it does lend itself to a punk rock culture it tries to reach.

The name, Posen admits, comes from the first track off of the Orange County punk band Guttermouth’s “11oz.” record, which was the first ever release by Hopeless Records.

It started as a hobby in 1993, but two years later he committed full time, Posen said.

One of the most exciting moments while seeing the label grow, he said, was when they got their very first water dispenser and when the monthly fees came forth.

Posen saw no boundaries for the label.

The business expanded into a charitable arm in 1999 called Sub City, which raises money for non-profit organizations and promotes social awareness for certain causes by releasing special tracks.

One of the first ones to hop on board was Fifteen, the band, which was the first to release music through Sub City.

This type of attitude has spawned the Take Action! Tour, of which various bands participate, along with annual compilation releases, all in the name of doing good.

“I’ve always subscribed more to the positive side of punk and alternative than the negative side,” Posen said.

He hopes the bands stick to positive messages as part of their music agenda.

Posen does not seem to care for pity or negative energy.

Posen said his work model has been influenced by Benjamin Franklin’s 13 virtues and the late UCLA men’s basketball coach John Wooden, who became a mentor after Posen attended one of his basketball camps as a kid.

Although Posen said the duties as president of the label are not the same every day, he likes to schedule out his week, along with goals and strategies for the company.

“The work and the vision and passion for the company are a complete focus for him,” said Al Person, general manager of the label and co-worker of 13 years, who has taught music courses at CSUN.

The first time Person met Posen was in the mid-1990s when he answered an ad to be Posen’s roommate. Person said he wouldn’t think of working for anyone else now.

“Louis helps to provide that sense of connection to something … bigger than running a record label,” he said.

When asked what has been the best experience as founder of a record label, Posen could not decide.

“It’s tough to pick the best experience,” he said. “If I had to chose, it would be overall the ability to do it for 18 years.”