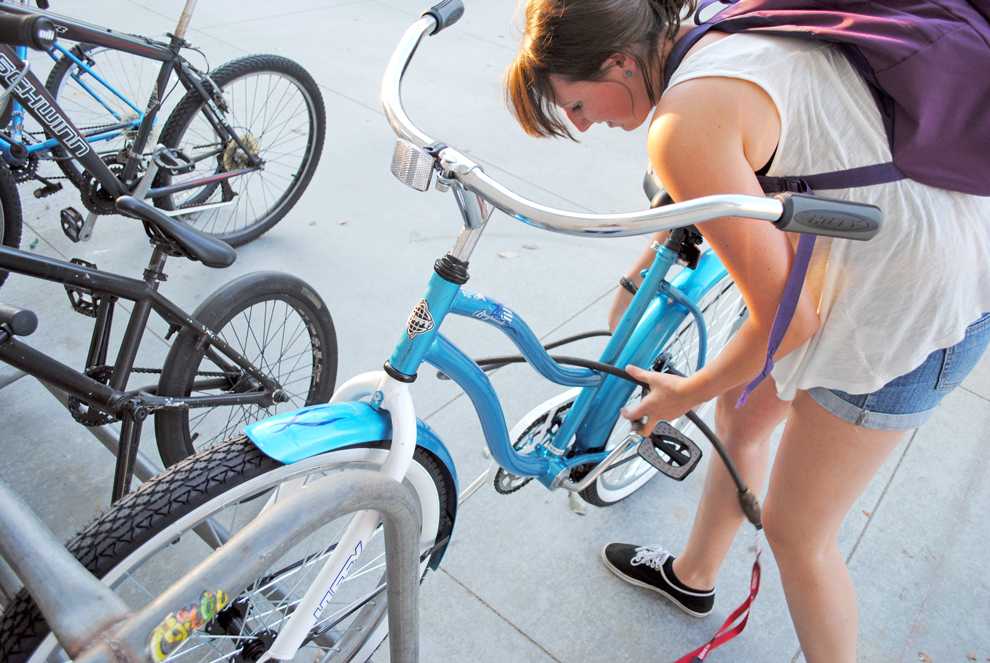 Collen Joyce, 20, CTVA major, locks her bike in front of Manzanita Hall. Collen says she is not worried about her bike getting stolen, but is worried about someone stealing her seat. Photo Credit: Andres Aguila / Daily Sundial

From Jan. 1 to Sept. 20, 82 bicycles have been stolen on campus compared to 46 in the same period the year before.

“It’s a tough problem, but not an unusual problem,” said Anne P. Galvin, chief of police. “It’s probably one of the most common campus crimes that there is.”

Twelve of the bikes stolen so far this year have been recovered, but only two were registered with CSUN police.

Since the beginning of the year 239 bikes have been registered and only one stolen registered bike was found.

Because bicycle thefts fluctuate daily and are dependent on eye witnesses for leads, police spokeswoman Christina Villalobos said students should register their bicycles with campus police and lock them up in one of the three bicycle compounds on campus.

“It is easy to use pliers to cut a cable lock,” she added.

CSUN bike collective member Dennis D’Alfonso, 24, said it is important to lock bikes properly and use both a U-shaped lock and a cable lock for secondary protection.

Thefts have occurred all over campus, from Redwood Hall to University Park Apartments to the Oviatt Library, and a majority of them happen during daylight hours, Villalobos said.

There have been 17 bikes stolen from campus since the semester started on Aug. 29, according to crime logs.  All of them were locked and none were taken from the bike compounds.

“If we have more students using those, the incidence of bike theft will just plummet on campus,” Glavin said. “Convenience gets in the way of good security.”

Bicycle security on campus could be achieved by registering with the police department, who attach a serial number to the bike which can then be used to find the owner if a stolen bike is retrieved, Villalobos said.

To gain access to a secure bike compound, a students’ drivers license must be programmed with the police and can then be used as the key, she added.

D’Alfonso registered his bike, but does not use the compounds because the locations are inconvenient to his classes.

Students expressed desire for a compound in student housing and the police have been working with student affairs to fund additional locations, Villalobos said.

Finance major Richard Sforza, 21, said he hasn’t registered his bike because he doesn’t think it is necessary unless the bicycle was worth at least $200 to $300.

Although students are the primary target, not all bicycle thefts are committed by CSUN students.

On Aug. 25, Edward Aznak, 41, was found in possession of a registered stolen bike, according to the daily crime log. He was arrested for bicycle theft and obstruction of a police officer.

Another non-student was caught stealing a bicycle tire, but was released because he was a minor, said Villalobos.

The suspect was also caught with possession of burglary tools and a bullet, noted the crime log.

Because the campus is open to the public, Villalobos said students need to be vigilant and report any suspicious activity.