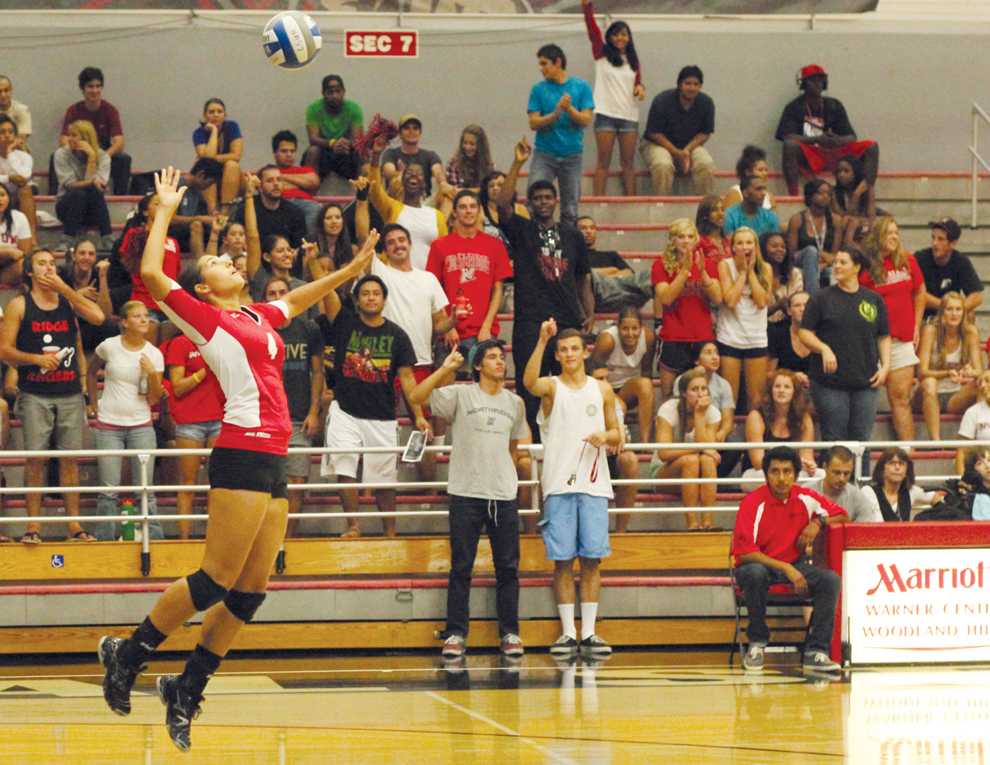 Matador fans cheer on CSUN's No. 4 Mariah Counts during her serve against the BYU Cougars on Saturday. Simon Gambaryan / Daily Sundial

The Big West is arguably the second toughest conference in the west coast, behind the  Pac-12. Having battled teams from that league as part of their non-conference schedule will benefit the Matadors in conference play, CSUN head coach Jeff Stork said.

“We played three Pac-12 teams (Utah State, USC, and UCLA) in our preseason and I thought we were in some of those matches some of the time,” Stork said. “We did some real good things against some real high-quality teams. The question becomes if we can sustain high levels of play over a longer period of time. I think we can.”

The Highlanders come into the match with a 3-10 record. They will face a Matador team that’s been anxious to prove their critics, who picked them to finish near the bottom of the Big West, wrong.
“Riverside has been playing well of late. They had two wins this past weekend against a very good (Loyola Marymount) team and an OK Cal State Baskersfield team,” Stork said. “But we are confident going into the match that the high level and consistent play is going to hold out.”

The Matadors are going to need that confidence, as they will look to improve on their hitting (.130) from Saturday’s match against BYU.

CSUN hasn’t been able to get any wins against high-powered teams so far, but it feels the experience from the losses made it better as it begins league play with a fresh attitude.

“We learned to rely on each other and we’re going to do everything we can to keep them (UC Riverside) off-balance,” CSUN opposite hitter Mahina Haina said.

Matador freshman Casey Hinger, who last week said she “couldn’t wait” to go to UC Riverside and get a win, will try to back up her talk by exploiting one of CSUN’s strenghts: passing.

“We are a great passing team, that has been our consistently strong point throughout the whole season,” said Hinger, a middle blocker. “We pass very well, so if we can get that consistent pass that we have been doing, it sets it up for the setters and for hitters to get their kills.”

The team is road-tested as they have only played two home games this season. That’s why Stork gave the team a day off this week.

“We gave the girls a day off (Monday) because we have been burning on both ends now for six weeks,” he said. “We are only given a couple of weeks to prepare for competition and I think those early weeks there was a feeling-out in essence, getting back into volleyball shape after a long summer.”

The Highlanders, who swept both Loyola Marymount and Cal State Bakersfield, will be having their home opener against CSUN.

“We are really excited to have (Big West play) open with Riverside because we did well against them last year,” Hinger said. “I am looking forward to going in there and beating them again.”