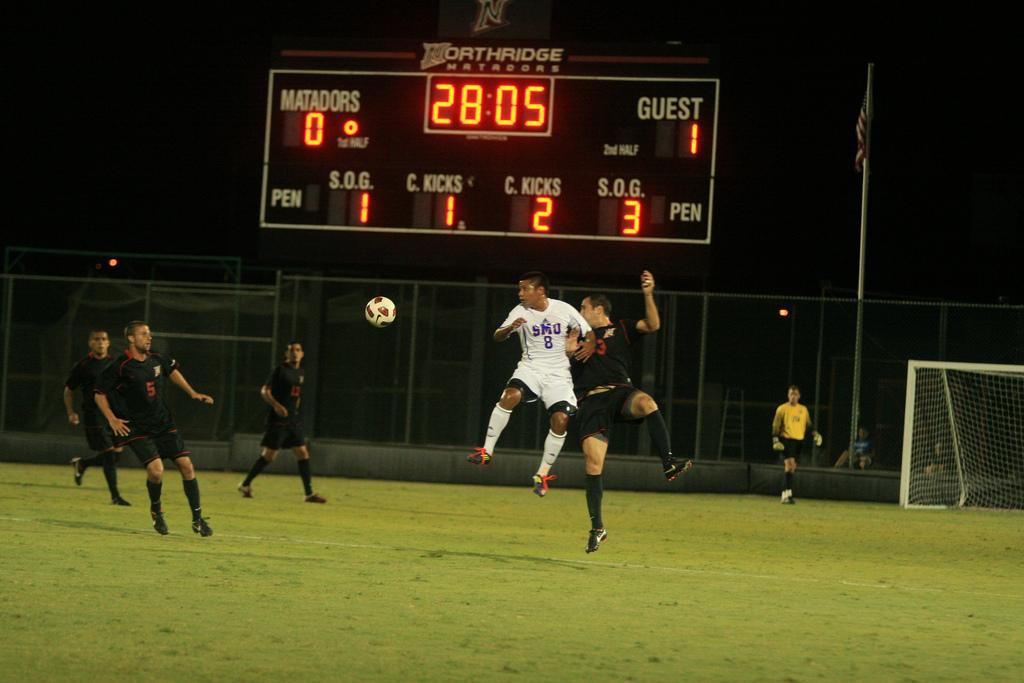 As lightning loomed in the distance, the Matadors (2-4-1) had already been thunderstruck coming into their match against Southern Methodist.

Two key Matadors didn’t make it to the pitch for the match against SMU on Friday night at Matador Soccer Field: midfielders James Rochlitz and Gustavo Villalobos, who are out for the season.

Without them, on a night marked by mild lightning in the skies, the Matadors fell to the Mustangs, 1-0. The also fell to 1-3 at home.

“Everyone’s a piece of the puzzle,” said CSUN co-captain Rafael Garcia, who made his regular-season debut against SMU following a lengthy recovery from a torn meniscus suffered during preseason. “And losing guys of that quality is definitely going to hit us hard, but we have other players that could fill those positions and get the job done.”

Rochlitz is out due to a sports hernia while Villalobos broke his right leg in practice.

Following a scoreless first half, the Mustangs (4-3) came out shooting in the second and found the game-winner in the 58th minute via SMU midfielder Tyler Engel from inside the left box. Mustang Damian Rosales passed the ball up ahead to teammate Juan Castillo on the right side of the box, Castillo then crossed the ball to Engel, and all he had to do was kick the ball in.

“On one play, we fell asleep and they punished us for it,” Garcia said. “We paid the price.”

Matador forward Edwin Rivas had the best chance to tie the match as time was winding down. Rivas blasted a powerful kick from the left side of the box, but Mustang goalkeeper Jaime Ibarra made the save.

The teams were evenly matched through the first half. CSUN midfielder Rene Anguiano and forward Christian Gonzalez Diaz both had scoring opportunities late in the first, but both shots sailed wide left of the net.

SMU outshot the Matadors 6-5 in the half and finished the game on top 14-12. CSUN’s defense made a handful of crucial deflections to keep the score at zero at the half, but the Mustangs’ offense kept putting pressure on the Matadors’ defense. SMU edged out CSUN on shots on goal 4-3.

Matador goalkeeper Michael Abalos had two saves early in the match and finished with three. One save came from a careless possession by CSUN defenders in front of the goal that allowed a Mustang to take a shot. Luckily for Abalos, the ball was deflected and he was able to pick it up before a Mustang was able to finish.

Despite missing the first six games of the season, Garcia started the match and played as if was not hurt at all. The midfielder started the match wearing a knee brace on the surgically-repaired leg, but took it off 20 minutes into the match.

“I just used the knee brace just to warm up my knee,” Garcia said.

The co-captain played roughly 70 minutes, taking a break at the beginning of the second half.

Though the Matadors were shut out for the first time this season, CSUN co-captain Joe Franco has full confidence in his team, which hosts Seattle on Sunday morning.

“We’re the better team,” he said. “SMU is the more known team on the map, but clearly we had more possessions … it’s just tough when we lose like that.”