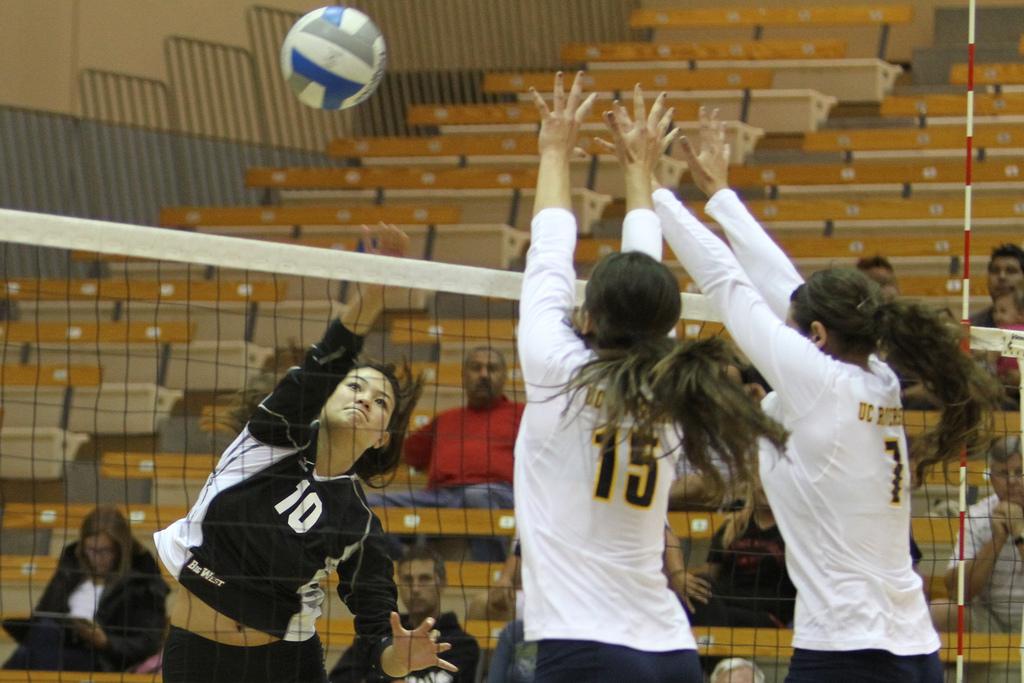 A match-up between teams projected to finish in the bottom of the league standings by the Big West Coaches’ poll proved to be an exciting one as the UCR crowd made its presence felt.

Free pizza was being handed out at the start of the third set by the UCR staff to pump up the crowd as the Highlanders trailed two sets to none.

“I think Northridge should do a little bit more of that (free pizza),” Stork said. “It was a great crowd and at times I found myself having to scream in the huddle.”

The match started with a thrilling first set, capped off with Natalie Allen tipping in the final point to give CSUN a 27-25 win.

It was that kind of night for Allen. She started off hot with seven kills in the first set and finished the night with 12.

Even after CSUN continued its hot hitting in the second set, the UCR crowd kept the Highlanders in the match.

“It started with passing. Sydney (Gedryn) did a great job and Mahina (Haina) crushed the ball tonight,” said Allen, an opposite hitter.

The Matadors looked at ease throughout the second set as Casey Hinger finished the set with a kill for the 25-16 win and CSUN took a commanding 2-0 lead.

The box score indicated Allen and Haina put up a massive amount of kills, but it was Gedryn with her 38 assists and 10 digs that allowed the hitters to out-hit the Highlanders.

“I had a lot of options tonight on where I was going to set because the passers were doing a great job,” Gedryn said.