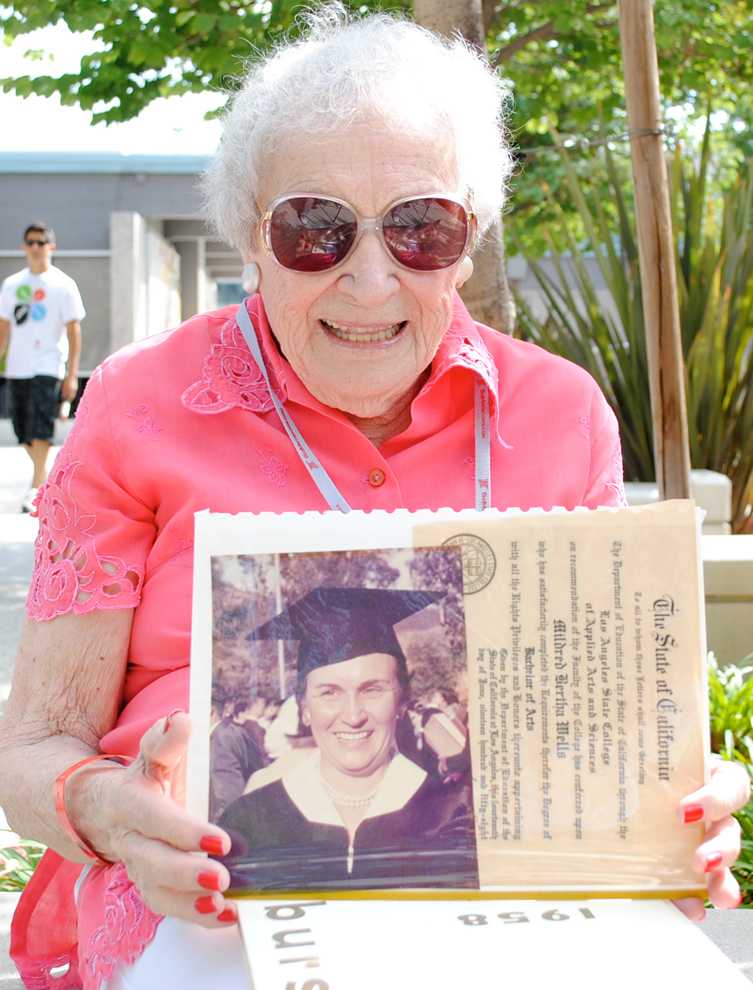 Mildred Wells, 99, holds up a photograph of herself in her cap and gown. She was part of the first graduating class at CSUN in 1958. Matthew Rubinfeld / Contributor

Alumni, faculty and students came together to see how much CSUN has changed through the years and celebrate the fourth annual Founders Day, Friday.

“There were no buildings, this stuff (today) is just amazing,” said Mildred Wells, 99, part of the first graduating class of San Fernando Valley State College.

Wells, who graduated in 1958 at 46-years-old, said she had to wait to go to college because the Depression affected her family. After earning an English degree, she came back to Northridge 20 years ago and tutored blind students. Her son graduated CSUN in 1976.

“You helped write the history of this great university,” she told them. “You laid a solid foundation that has ensured a strong future.”

Wells wasn’t the only alumni to talk about the changing look of the school, and Koester acknowledged the dramatic changes the campus has gone through, including after the 1994 earthquake.

“They’re in awe of the campus,” said Shellie Hadvina, associate director of the Alumni Association.  “When a lot of them came here, there were orange fields and they parked in a dirt parking lot and now there are these beautiful parking structures.”

Bob Rawitch, alumnus co-chair of the event and journalism professor, graduated from the school in 1967. He joked in his luncheon speech that at 66-years-old, it’s not often he’s in a a room where he’s one of the youngest people.

“When you gather this many alumni from 40, 50 years ago, it gets everybody a chance to get reacquainted,” Rawitch said. “People now have grandchildren. Some of the grandchildren are even attending school here, and it gives them an opportunity to think back to what CSUN did for them.”

CSUN has about 37,000 students enrolled in the fall semester, over 5,000 of whom are freshmen, Koester said.

The campus was smaller when Wells attended.

“Everyone knew everyone,” she said.

Koester’s message did not focus on the changing demographics, but rather maintaining school spirit 50 years later.

“We hope that as you spent time on the campus today that you come away with a renewed sense of pride in your university,” she said.