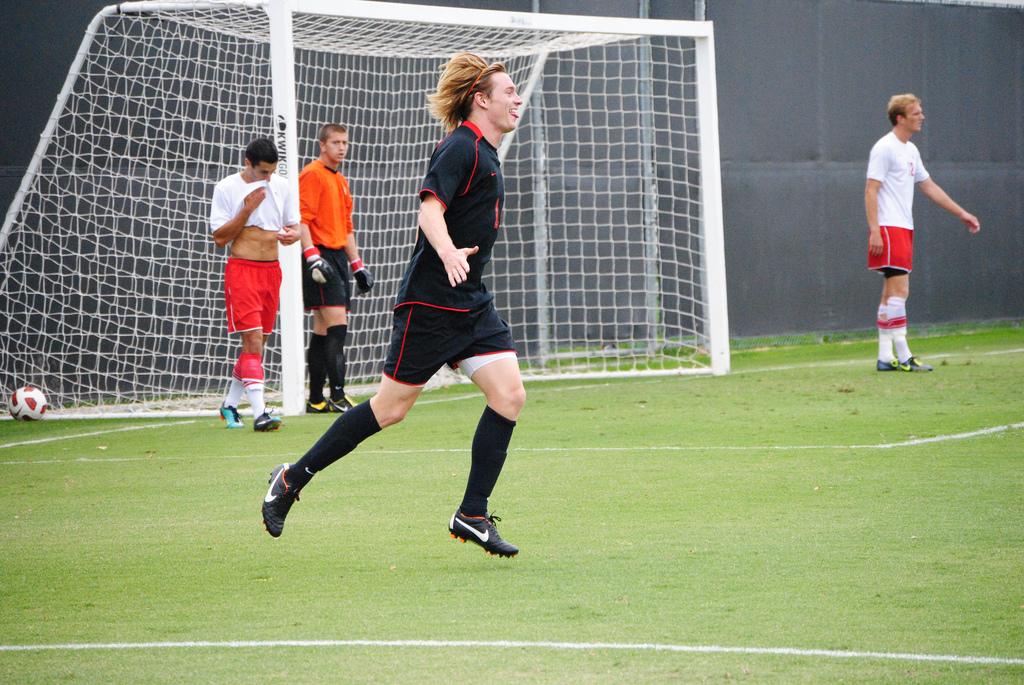 After being shut out for the first time this season Friday night, the Cal State Northridge men’s soccer team bounced back with a shutout of its own as the Matadors defeated Seattle 3-0 on a damp Matador Soccer Field Sunday afternoon.

With poor field conditions, Matadors and Redhawks went scoreless until the final minute of the first half when Luis Gutierrez’s first goal of the season put CSUN ahead 1-0, giving Northridge (3-4-1) momentum heading into the second half.

The opening score happened as midfielder Yarden Azulay carried the ball into the left side of the box and flicked it with ease to Gutierrez, who beat Seattle goalkeeper Jake Feener.

It didn’t take long for midfielder Chris Smith to score CSUN’s second goal in the 58th minute. Midfielder Carlos Benavides ran the ball up the right side and crossed the ball to Smith, who was running along the left side of the box and headed the ball in.

Big West Offensive Player of the Week Thomas Ramos put the cherry on top when he netted the third goal for the Matadors. Midfielder Rene Anguiano was tangled with a Redhawk defender in the box, but he managed to cross the ball to Ramos, who was about 15 yards in front of the net.

Seattle (1-4-2) took plenty of shots, tallying 14 in the game, but only one shot on goal. The Matadors played just as aggressive, with 21 shots and 10 on goal.

Reducing their shots-on-goal ratio was an area CSUN head coach Terry Davila had addressed earlier in the week. His team was able to answer  his request.

“We put a little more speed (on the pitch),” Davila said. “We played with a little more urgency, instead of always recovering when we’re down 1-0.”

Redhawk midfielder Ben Striar had six shot attempts for Seattle, but none were on goal. Striar’s teammate, forward Mikey Ramos, had five shots and was the only player for Seattle to get a shot on goal.

The Matadors continued their offensive pressure in the second half, taking two quick shots within the first five minutes of play. Forward Edwin Rivas and Smith both had shots well inside the goal box, but Seattle goalkeeper Marshall Reese, who had subbed in for Feener, blocked both.

CSUN’s defense also stepped up in the second half, controlling the tempo of the match. Seattle’s miscommunication led to only one shot on goal by the Redhawks.

“We just executed our game plan really well,” co-captain Joe Franco said. “We have the team and the players to go do it.”

Franco’s teammates executed both defensively and offensively. There were 12 different Matadors who attempted at least one shot. Rivas and Ramos led the team with three shots each.

The Matadors have also reduced the number of fouls which plagued them early in the season. They finished the match with seven fouls, while Seattle had 10 and one yellow card.

Friday’s 1-0 loss against SMU had left the Matadors with urgency to get a win before their Big West Conference schedule opens. CSUN plays at UC Davis Wednesday.

“I think we walked away from Friday’s game with a bit of a sour taste in our mouths, so we were looking to make things right,” co-captain Rafael Garcia said. “I felt that we should’ve won Friday … losing wasn’t an option today.”