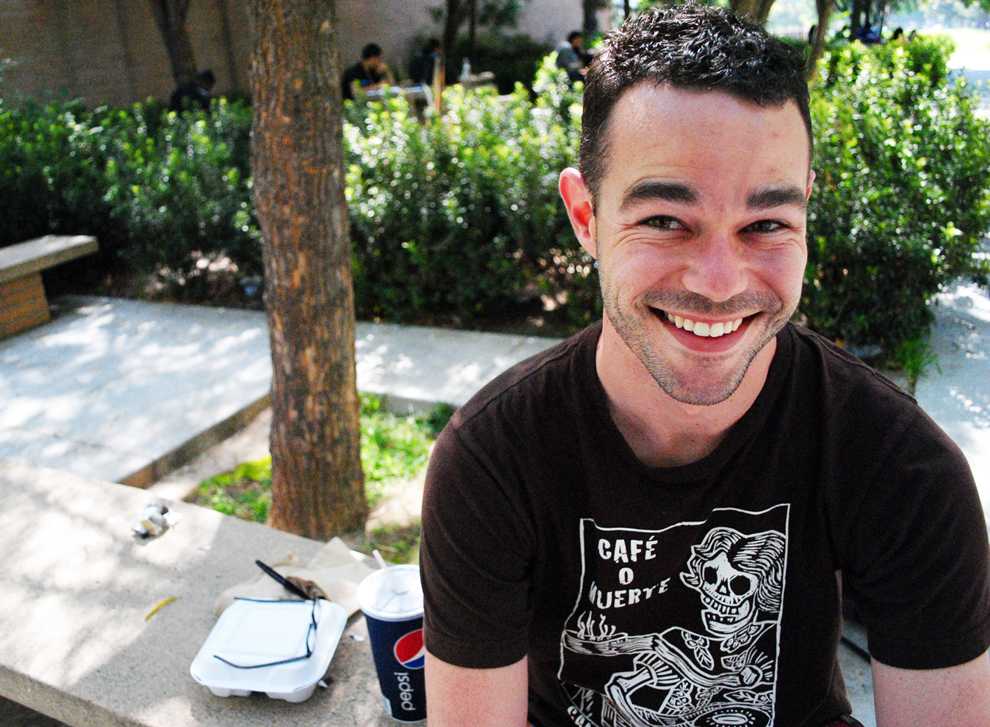 A "very happy and excited" Ryan Grady, social work graduate student, sits next to his lunch during a break from classes. Grady is one of 23 students from the CSU campuses to be nominated for the William Randolph Hearst/CSU Trustees' award for Outstanding Achievement and the first CSUN student to win the $10,000 Ali C. Razi Scholarship for being the highest-ranking Hearst scholar. Andres Aguila / Daily Sundial

The CSU awards annual scholarships to students throughout the system, and this year’s top honor went to a CSUN student.

Ryan Grady, 28, was named the highest-ranking Hearst Scholar and given the Ali C. Razi Scholar Award.

“I was very honored and privileged,” said Grady, who will earn a master’s in social work this spring.  “The award ceremony and speeches were very touching.”

Grady was given the $10,000 award, the largest of the trustee scholarships, said Erik Fallis, CSU spokesman.

“It was a wonderful ceremony and very amazing to meet the other award winners,” Grady said.

The award focuses on honoring those who have overcome struggles, Grady said.

Grady was homeless at 17-years-old, became emancipated and began abusing drugs, he said.  Grady was diagnosed HIV positive when he entered rehab.

“I believe that the struggles I have overcome have made me a stronger and better man,” Grady said.

In the past eight years, he has obtained his associate’s and bachelor’s degrees, and is now the president of CSUN’s Social Work Society.

“My dedication to school is only eclipsed by my patience and determination to have a better life without the help of welfare and subsidized housing,” Grady said.

Stipends from the city have helped Grady cover the cost of education and living expenses, but Grady can now remove himself from much of the city-funded programs.

“Last year, I discharged my case with the Department of Public and Social Services and Section 8 housing because I outgrew the need for those extremely necessary social programs,” Grady said.

Grady found his passion for social work through his father, who worked with people to allow them to die at home rather than at the hospital.

“The person he was and the attitude he had towards helping people and the helping professions influenced me,” Grady said.

Grady found out he won the scholarship in July and said being able to pay for about a year of school is very helpful.

“I am so grateful for all that I have been given,” Grady said.