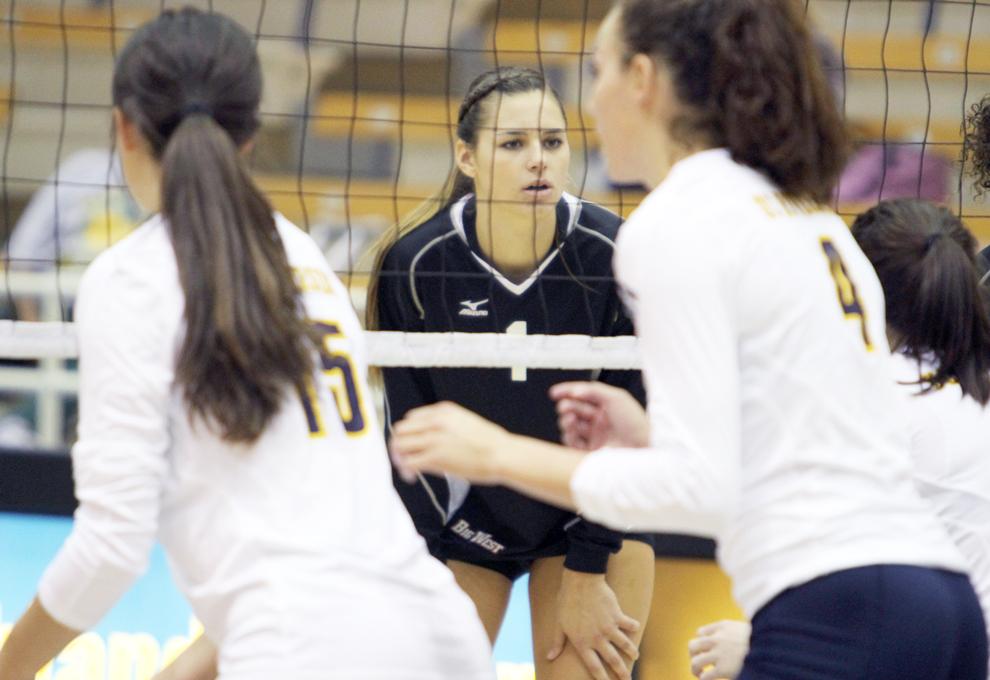 Before the Matadors headed to Riverside for their Big West Conference opening game against the Highanders, CSUN freshman Casey Hinger did some mild smack talk.

Hinger backed up her talk by putting down eight kills to help CSUN (7-6, 1-0 Big West) sweep UC Riverside on Saturday at the UCR Student Recreation Center. It was the Matadors’ third consecutive win overall against the Highlanders.

Still a Valencia-High star last year, Hinger wasn’t around for the Matadors’ two wins against Riverside in 2010. That didn’t stop her from including herself as part of CSUN’s recent success against them.

“I knew the team had a good record against UC Riverside and they were excited to go there and have that be an opener and make a name for CSUN in the first game,” Hinger said. “I could feel everyone’s excitement and I kind of just shared it.”

Having lost two consecutive games going into a packed UCR gym, CSUN needed a consistent performance and to minimize errors. The Matadors showed that poise at the end of the first set when, trailing 25-24, they scored three points in a row to take the game.

CSUN didn’t allow it to get as dramatic in the second set, winning it 25-16 on a Hinger kill. Northridge also won the third, 25-20.

“I had confidence in our team and like I said before, our passing is our strength and I knew if we could control that, we could control Riverside because we’re a better ball-handling team than them.”

With the Highlanders in the rearview mirror for the time being, Hinger is now looking at Long Beach State, the Matadors’ next opponent. The 49ers (7-5, 1-1) are predicted to win this year’s Big West championship by the Preseason Coaches’ poll.

That doesn’t impress Hinger, who offered a bit more of pregame talk.

“I’m excited, man,” she said. “My best friend (middle blocker Chisom Okpala) plays for Long Beach State, so I’m excited to have them come here and show them who’s boss.”

Sophomore Sydney Gedryn has transitioned well into the starting setter position for CSUN. Gedryn, who had a double-double with 38 assists and 10 digs against UC Riverside, has started every game this season after only getting four starts in 2010.

“I worked really hard during the spring season,” Gedryn said. “I love being the setter. It gives me a lot of touches on the ball.”

Gedryn won the starting spot over senior Samantha Orlandini, who started 31 of 32 matches last year. The sophomore has established herself as one of the most reliable players on the team, putting up a total of 483 assists this year.

“She’s an exceptional net player,” CSUN head coach Jeff Stork said. “She blocks extremely well. Her serve’s gotten a whole lot better. She’s learning the leadership side of things, knowing what to run, when to run it.”

Despite her solid performance thus far, Gedryn’s not relaxing. She knows Orlandini’s waiting for the opportunity to return to the lineup.

“(Orlandini)’s a great competitor, so I always have to keep my game up to make sure I’m playing,” Gedryn said.

Orlandini has yet to appear in any games this season due to what a source close to the team deemed as the breaking of a team rule. On Monday, Stork suggested Orlandini could see some court time soon.

“She’s in a position now of controlling how much court time she gets,” Stork said. “She’s been playing very well. She’s a natural leader and a tenacious competitor. These are all qualities that should help her on her quest to get on the court more.”

“As good as (Orlandini) is, (Gedryn)’s doing a real good job,” Stork said. “So it’s not just doing things. Some of it is in control of some other people’s hands.

“(Orlandini)’s contributing to the success of the team. It might not be as a primary right now, but certainly she’s doing a lot of good things within the team environment,” Stork added.