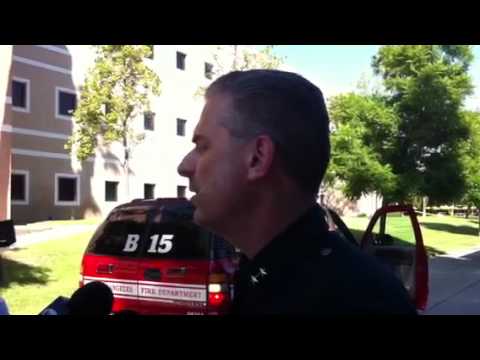 >>>UPDATE Sept. 28 3:30 p.m.: CSUN philosophy student Gahren Moradian, 22, of Burbank has been identified as the suspect who claimed he had a gun on campus Tuesday prompting a shutdown of the Oviatt Library.

>>>ORIGINAL: The suspected gunman whose suspicious behavior prompted the Oviatt library to close Tuesday is in custody after turning himself into police, said Carmen Ramos Chandler, CSUN director of news and information.

A man, whose identity has not been released, came forward shortly after 8 p.m. Tuesday after his photo was circulated through the Internet and on-campus fliers, Ramos Chandler said.

He is being held with CSUN police, said Christina Villalobos, campus police spokeswoman.

Law enforcement searched the library and monitored campus perimeters after city police were notified at 10:27 a.m. of a possible gunman on campus.

Students received the first automated message over an hour later at about 11:45 a.m. Five automated updates followed throughout the day.

The suspected was described as a white male, 5’8”, wearing jean shorts and a white t-shirt with the words “human rights violation” and donning short spiky hair, according to the first message.

He was seen outside of the Oviatt Library before the campus-wide alert was issued, according to an eyewitness report.

Sarkis Mkrtchyan, 24, said he saw a man who fit the suspect’s description screaming profanities next to a stone pillar by the front of the building, and saying he was “doing a lot, not getting credit for it, and there’s no recognition.”

It is not confirmed whether the suspect is a CSUN student.

Student Raymond Paguia, who was on the first floor of the Oviatt at the time, said the fire alarm went off shortly after and students were evacuated immediately.

The library was cleared using the fire drill system after the alleged gunman told a library staff member he had a gun and authorities were called, said Police Capt. Fred Fernandez.

Every available police officer was dispatched to the scene, including trainees, said Dean Arnold, the music and media supervisor at the library.

Police searched the campus perimeters from Bayramian Hall to the west, the planetarium to the east, Sierra Tower and Eucalyptus Hall to the south, and the education building to the north.

Some students said they were leaving campus because of the elevated threat levels, however because police deemed the threat confined to the Oviatt Library, the campus was not on an enforced lock-down said Ramos Chandler.

Classes were not cancelled, but anyone who felt uncomfortable were told they could leave campus as long as they notified their professors or supervisors, according to an automated message from CSUN police sent to students around 1:30 p.m.

About 30 students were escorted back into the library at about 4:45 p.m. to retrieve their belongings left behind during the evacuation, said Augustine Castaneda, CSUN security guard.