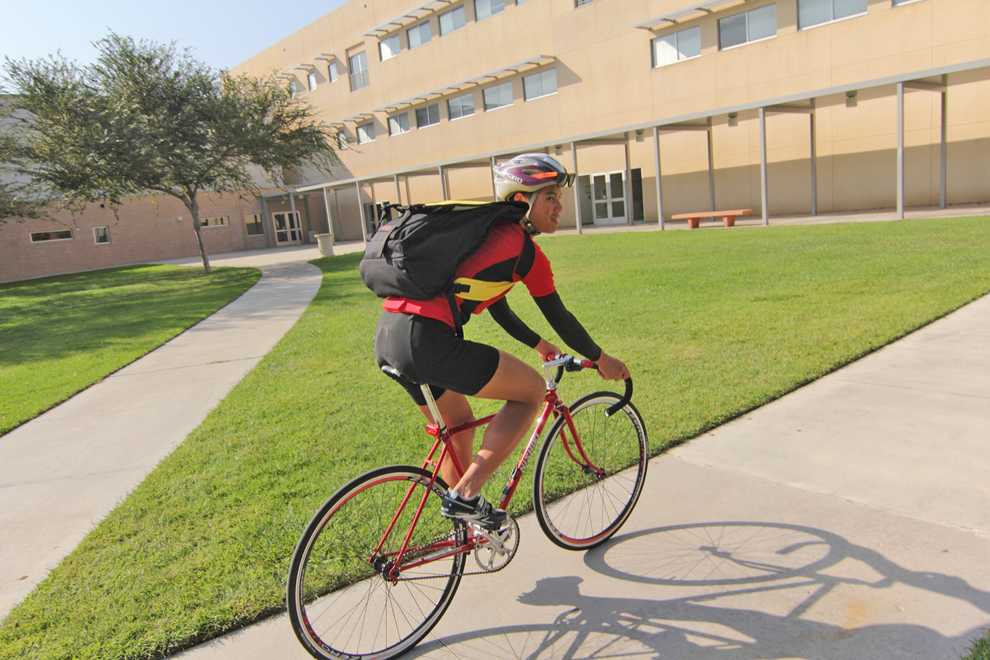 Every morning, hundreds of students head to CSUN on congested freeways, crowded buses, bicycles and skateboards to make it to class on time.

CSUN is known to locals as a commuter school with students traveling dozens of miles to further their education.

Thirty percent of CSUN freshmen and only 9 percent of undergraduates live on campus, according to College Portraits’ most recent figures.

To students like sophomore Ira Caminong a lengthy commute may deter students from participating in extra-curricular activities and engaging with the campus community.

Caminong’s method of transportation is his red fixed gear bicycle which gets him to school from Burbank. He travels 26 miles round trip, 45 minutes each way.

He said a car is out of his budget and public transportation it too inconsistent.

“I have no choice but to go through busy streets,” said Caminong. “Only 10 percent of streets have bike lanes.”

Caminong has been the victim of two hit-and-runs, the first landing him in the emergency room and the second costing him a layer of skin, he said.

The political science major manages to participate in the CSUN Speech and Debate team, but his commute is the main reason he does not participate in other clubs or organizations. But if he lived closer to campus, he would make the effort, he said.

Augie Garibay, activities coordinator for clubs and organizations at the Matador Involvement Center, said attitude is the most influential factor in a student’s level of campus involvement.

“A commuter campus can be a very engaged and very involved campus,” Garibay said. “But more often than not, a student will allow the excuses of commuting as a reason for not getting engaged with your university, to not have pride in their school, to not ask questions in class or stay longer to talk to the professor.”

Freshman Brian Hernandez does not allow commuting to be an excuse to forgo campus involvement, but he said it’s difficult to get fully involved.

Hernandez takes four buses and one train to and from CSUN, a 3-hour commute each way from his home in Hawthorne.

“After Freshman Convocation, I didn’t get home until one in the morning and had to walk unsafe streets,” Hernandez said. “But it was Thursday, so the dangerous people weren’t out.”

Despite the lengthy commute, Hernandez said it’s not all bad.

“The pride of being a student here outweighs the obstacle,” he said.

He is interested in joining Unified We Serve, CSUN’s volunteer program, as well as Jishin Taiko, a Japanese drumming club, but knows it will be difficult to attend meetings or practices if they run late.

“People who don’t get involved are more apathetic,” Spector said. “There’s a decline in wanting to do better and even liking their campus. You do more, you do better.”

Spector said she has listened to student leaders talk about how a commuting mentality was something they created for themselves, but they did better academically after becoming involved.

Ramos said he did not get involved in any clubs or organizations during the first two years of his college career partly because he commuted three hours from Los Angeles using public transportation, and partly because he was spending the majority of his time with his friends from high school.

When he and his friends could no longer take classes together, Ramos said he had to find other community members with similar interests. He then joined CAUSA and became a student activist with like-minded peers.

“I found a group of passionate students that were working towards making a change in the Central American community,” said Ramos. “I’ve  learned to appreciate school and the work that it takes to be an activist.”

Ramos said that he would not be as appreciative of his college experience if he did not get involved.

“I would have lost an amazing compliment to my academic journey and great experiences that I could use in the future,” Ramos said. “I would be far less critical and aware of the world I’m in.”