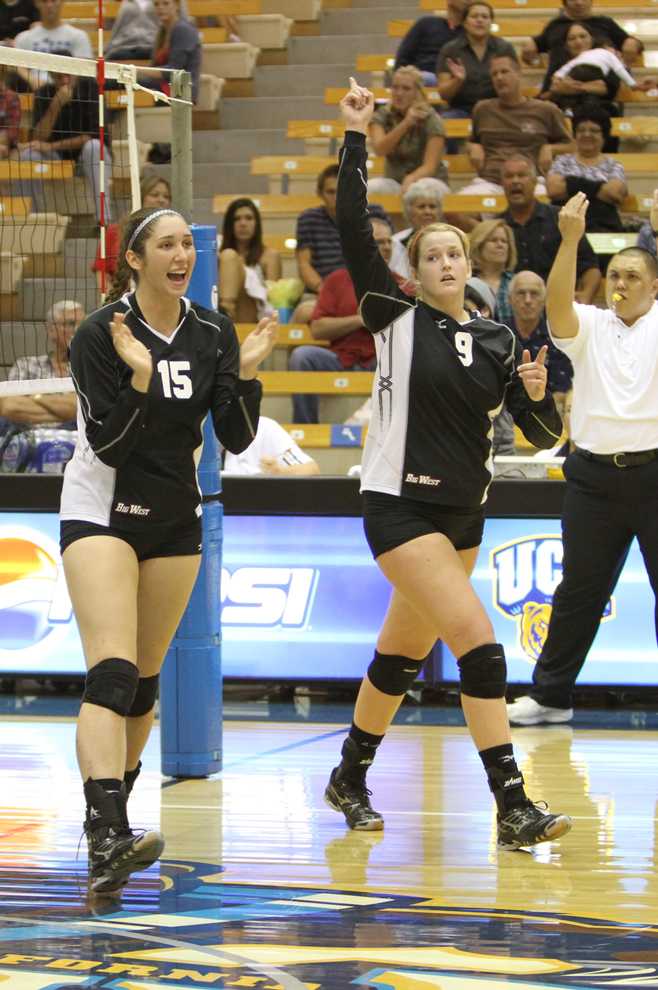 Sam Kaul (15), Natalie Allen (9) and the rest of the Matadors will try to improve their Big West record to 2-0. Photo Credit: Tessie Navarro/ Visual Editor

The CSUN women’s volleyball team hopes to continue its winning formula in Big West Conference play as it prepares for its conference home opener against Long Beach State Friday night.

The Matadors (7-6, Big West 1-0) started their Big West Conference schedule on the right note after beating UC Riverside on the road Saturday night.

The Matadors swept the Highlanders in front of a hostile crowd at the UCR Recreation Center. CSUN was led by excellent passing and aggressive hitting from Natalie Allen, Mahina Haina and Casey Hinger.

“Overall, we had a very good match at Riverside,” CSUN head coach Jeff Stork said. “We can be better. I was pleasantly surprised on how certain players did because I saw a lot of room for improvement in them.”

Among those improved players is setter Sydney Gedryn, who has taken the position over senior and former starter Sam Orlandini. Gedryn had a double-double of 38 assists and 10 digs at Riverside.
Gedryn and the Matadors will look to take that momentum as they return home for matches against Long Beach State (7-5, 1-1) and Cal State Fullerton (7-7, 2-0) on Friday and Saturday, respectively.

“I am happy with where we are as a team,” Stork said. “We are trying to make some improvements on particular areas, but, overall, this is a good volleyball team and I am confident going into this weekend.”

The Matadors have beaten the 49ers at home three consecutive times dating back to 2008. Long Beach State, which has been predicted to win the Big West this year by a coaches’ poll, might come into the game limping, according to Stork.

“If I were to look at Long Beach right now, unfortunately for them, (opposite hitter) Caitlin Ledoux may not be playing,” Stork said. “It is unfortunate for the league because she is a great player, and we may not have to focus on her. But you never know. Long Beach may come out and all of a sudden there she is.”

Ledoux is a two-time All-America Honorable Mention selection and ranks ninth all-time in career kills at Long Beach State with 1,268. She needs 110 digs to reach 1,000, which would put her in an elite group of just four other 49ers with 1,000 kills and 1,000 digs.

CSUN libero Cindy Ortiz said the team has scouted Ledoux and they will be ready for her if she starts.

Gedryn feels confident going into the weekend. She said that if they can carry over the hitting and passing from the Riverside match, the team can come out with wins against both the 49ers and Titans.

Stork said his team wants to improve its blocking because Fullerton, the defending Big West champion, relies heavily on two players for its  offense: Kayla Neto and Bre Moreland.

“If we can control their No. 1 or No. 2 hitter and minimize what the other players do, I think we have a good shot at them as well,” Stork said.