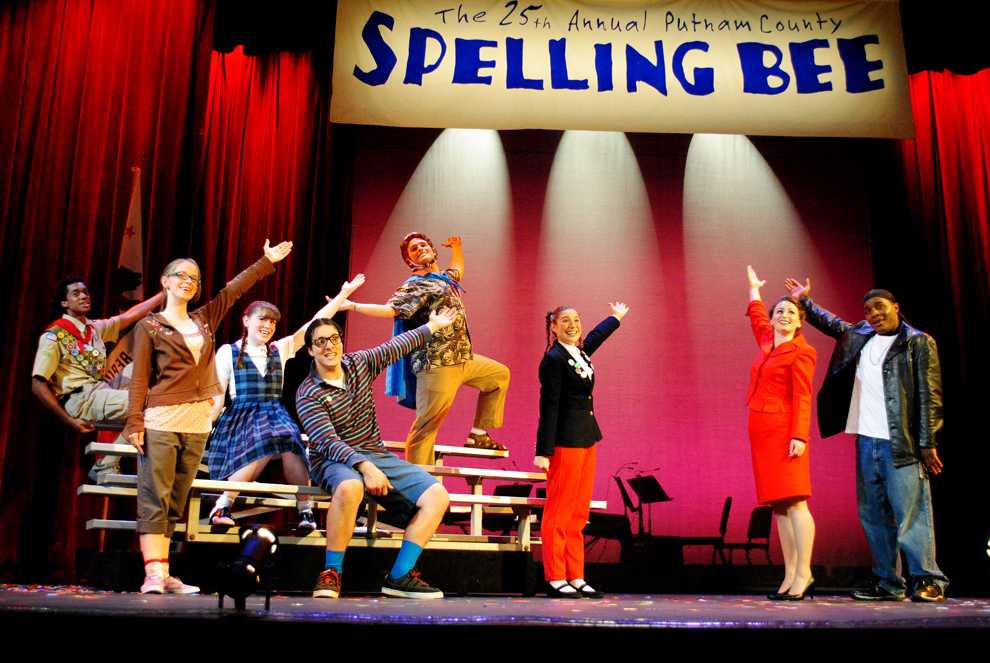 At CSUN’s Little Theatre, where the Tony-award wining musical “The 25th Annual Putnam County Spelling Bee” is performed, the actors in the show are just as enthusiastic as their characters. By the Sept. 23 opening night, all shows in the first weekend – Friday, Saturday and Sunday – and the Sept. 28 show, had all sold out.

The musical shows the determination and ambition of six elementary school spellers which carries them through an afternoon of emotional upheaval and disappointment.

In the opening song, “The 25th Annual Putnam County Spelling Bee,” the spellers sing: “It’s a very big, very fraught — simple but it’s not — it’s a very big undertaking.” The six characters – Leaf Coneybear, Chip Tolentino, William Barfée, Olive Ostrovsky, Marcy Park and Logainne Schwartzandgrubenierre – must all undergo personal battles and emotional upheavals in their attempt to win the spelling bee and go to a national competition in Washington, D.C.

Other participants involved in the spelling bee are Rona Lisa Peretti, host and winner of the third annual spelling bee; Miss Spano, the language arts teacher; Douglas Panch, vice principal of the elementary school, returning after a five-year absence; and Mitch Mahoney, a parolee on community service working as the comfort counselor.

Four volunteers from the audience are invited to participate in the spelling bee, ensuring that each performance is unique.

“It’s a really fun show,” said Alex Tordi, senior theatre major who plays Leaf Coneybear in the show. “You get to let loose and have fun. I got to play with the character and create his personality from scratch.”

Leaf Coneybear, listed in the program as a “late replacement” from an alternative lifestyle, has a large family that is unsupportive of him. One of his solos is titled “I’m Not that Smart.” Wearing a cape he made himself, a bicycle helmet and exuding energy from every pore, Tordi never stops moving, dancing, jumping, running, and spinning across the stage.

“I’ve never played a character like this before,” Tordi said. “Leaf has a lot of funny moments.”

Indeed, the audience never stopped laughing, both at Tordi’s antics and at other jokes throughout the show.

Logainne Schwartzandgrubenierre, played by Jasmine Cervantes, is the daughter of two gay fathers who push her to succeed. Schwartzandgrubenierre is the youngest competitor and president of her elementary school’s Gay Straight Alliance. At one point in the show, she stands on the bleachers and makes a joke about the insanity of Michelle Bachman’s presidential campaign.

One of the audience volunteers, Vania Ellison, was excited to attend the show.

“I thought it was a real spelling bee,” said Ellison, deaf studies senior. “I’m not a big fan of musicals in particular, but I loved it. Being able to participate made the show a lot of fun.”

The show, competitive to the end, fights the idea of striving for perfection for perfection’s sake and encourages cooperation between the spellers.

“As the competition intensifies, so does the need for compassion, ethics, self-awareness and sympathy for their competitors,” wrote Director Garry D. Lennon in the playbill. “While the competitors each want to win, and as their numbers dwindle, the students learn they must depend on each other and they all share in various levels of self-doubt at insecurity.”

As serious a message the show carries, it also has a lighthearted whimsy that leaves the audience laughing and happy.

“Everyone comes from different backgrounds,” said sophomore Barton Perry, who played Comfort Counselor Mitch Mahoney, Logainne’s father, Dan, and Olive’s father. “We’re all the same, but we’re all different at the same time. We need to accept each others’ differences and celebrate what makes us special.”