W-Vball: Changes to starting lineup not enough for CSUN against Long Beach State 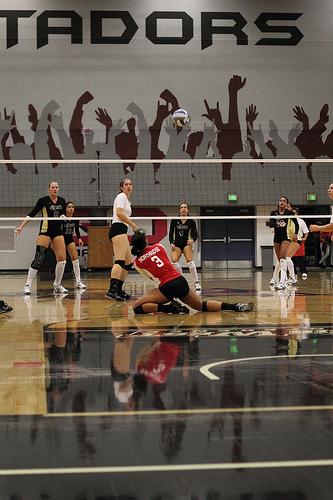 Junior Monica McFarland (3) made the switch to libero on Friday night as the Matadors fell to the 49ers in four sets. Photo Credit: Simon Gambaryan/ Daily Sundial

The Cal State Northridge women’s volleyball team made changes to its starting lineup Friday night, hoping it would bring in its first home victory of the season and a 2-0 start in Big West Conference play, but Long Beach State didn’t allow it.

Monica McFarland started at libero over Cindy Ortiz and Sam Kaul got the nod at middle blocker.

“I thought it was a great opportunity and I came out confident with the game plan and with what was expected of me,” said McFarland, who had a career-high 30 digs. “With all the changes that we made, I think we played great as a team.”

CSUN, which was coming off a straight-sets victory over UC Riverside, trailed Long Beach State two sets to none. The Matadors took the third set before falling in the fourth 25-21.

Perhaps what kept the team in the game was the cheering and support from the costumed and half-naked CSUN men’s volleyball team.

“We are here to support the girls’ volleyball team,” said CSUN opposite hitter Kyle Stevenson, who was wearing a blonde wig. “We are here to aggravate the (explicit) out of Long Beach.”

The Matadors’ star hitters had a rough start with Natalie Allen hitting negative .182 and eight errors by the end of the second set. Mahina Haina was right behind her, hitting at a .154 clip with three errors. For the match, Allen hit .045 with 11 kills and Haina recorded a match-high 16 kills (.196).

The team hit better once they started their rallies throughout the match, partly because of freshman Casey Hinger’s timely hitting. She finished the match at a .314 clip with 15 kills.

“Our outsides really pushed through for us,” Hinger said. “I think we did really well in keeping up with them and keeping Long Beach down (through those long rallies).”

With CSUN leading 14-8 in the third set the 49ers called a timeout. Northridge scored six straight points, led by the serves of freshman Mariah Counts. The Matadors pulled off the third set with ease (25-16).

Even though CSUN had a rough start to the match, the Matadors made it interesting in the first set.

The 49ers forced CSUN head coach Jeff Stork into two early timeouts in the first with the team trailing 17-11.

The Matadors almost pulled off a comeback, tying the score at 20, but they were done in by tips and fell 25-21.

The second set was competitive as the Matadors took a 20-17 lead that forced the 49ers into a timeout. An attempted kill by Haina was blocked, which gave Long Beach a 22-21 advantage and eventually a commanding 2-0 lead in sets.

“We are playing solid volleyball right now,” Stork said. “Overall, I am happy with the way we played, but not the result.”