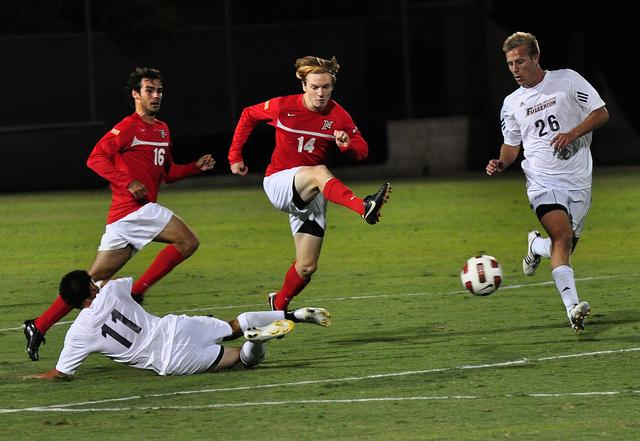 The freshmen trio of Yarden Azulay, Christian Gonzalez Diaz and Edwin Rivas scored all three goals for the Matadors (5-4-1, 2-0).

“Any time anybody gets on the field, I don’t’ care what year they are, just as long as they work hard, good things will happen for them,” said Davila, CSUN’s head coach.

The Matadors, who suddenly find themselves in first place in the league standings, are on a three-game winning streak and have 2-0 conference record, but co-captain Rafael Garcia wants the team to stay grounded.

“We finally feel like we have a team now and we’re trying to build from this,” Garcia said. “We’re not trying to get big-headed. It’s way too early in the season and we have to keep working.”

Forward Rivas gave the Matadors their third goal of the match in the 81st minute, and their ninth goal in the last three games. Midfielder Carlos Benavides was able to find defender Yuval Barak, who then crossed the ball to Rivas as he put the ball in the back of the net.

Benavidez, a sophomore, assisted on every goal and now has a total of six assists for the season.

The Matadors wore red long-sleeved jerseys with the temperature dipping into the low 70’s during the game. However, the color of the team’s jerseys has not contributed to CSUN’s recent success, according to Davila.

“We scored three (goals) with red, three with white, and three with black,” he said. “The only superstition that I have is that I don’t have one.”

Fullerton (6-2-2, 0-1) came onto the pitch playing aggressively controlling the ball early in the first half, but the Matadors woke up and started to play at their offensive tempo.

CSUN midfielder Azulay was able to score the first goal in the 35th minute. Benavides gave a through-pass to forward Diaz, who delivered a low cross to Azulay. The freshman from Israel then struck the ball, nearly hitting a Titan defender in front of him.

Four minutes later, Diaz went looking for a goal of his own. Benavides, who has been aggressive on offense, passed the ball to midfielder Chris Smith who crossed the ball to Diaz and netted the ball into the left side of the net in the 40th minute.

Both goalkeepers had an equal number of saves, with four in the match. Matador goalkeeper Michael Abalos racks up his fourth shutout of the season.

A small scuffle between Rivas and Titan defender Bobby Reiss broke out in the second half. No punches were thrown, but both players received yellow cards.

“I think (their aggressive play) affected them,” Garcia said. “They’re the ones that lost their heads and got a red card. We’re used to playing physical teams in the Big West and I thought we handled ourselves very well.”