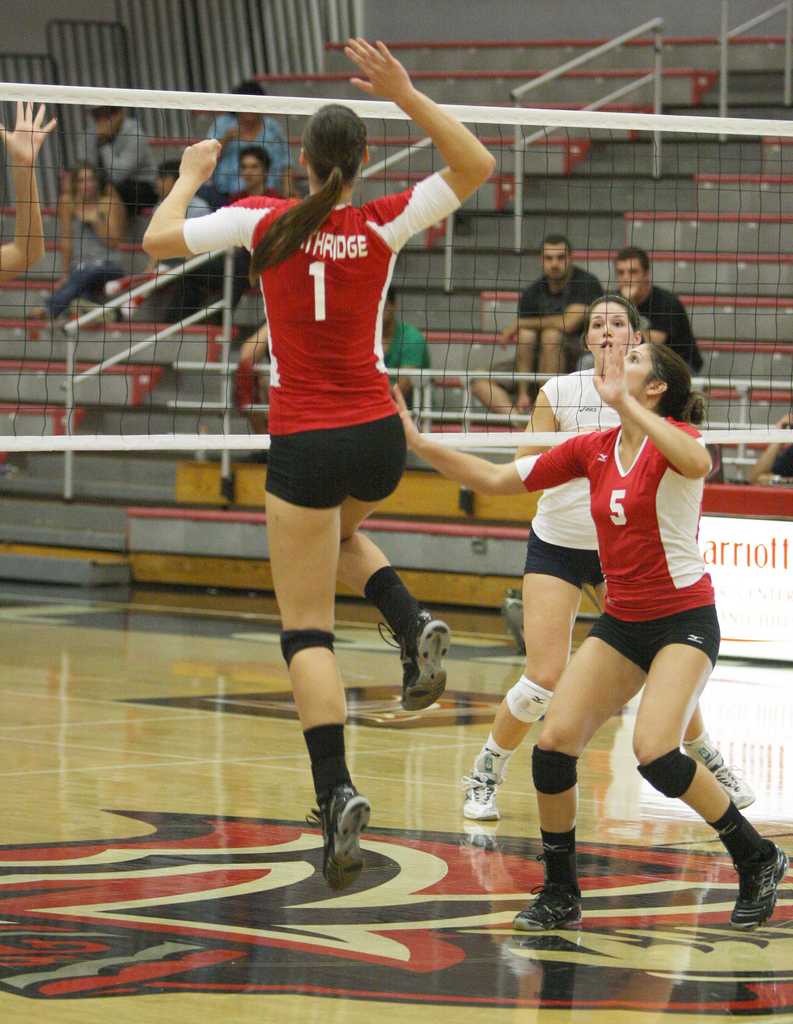 It had been three times this season the Matadors had partly looked like a championship-contending team at home only to end up crumbling under the pressure and superior play of their opponents.

It was beginning to look like that again on Saturday night at the Matadome against the defending Big West Conference champion Titans. This time, however, CSUN (8-7, 2-1 Big West) “rose to the occasion.”

“It’s the greatest feeling, being the underdog, people aren’t expecting that from you,” CSUN middle blocker Casey Hinger said following the Matadors’ hard-fought 3-0 win over Cal State Fullerton (8-8, 3-1). “We showed everyone, ‘look, that was last year’s winner, and here we are.’ We’re ready to take this conference.”

CSUN, which won at home for the first time in four tries, took a first step into being considered a contender in great part thanks to Hinger. The Matadors had a 17-13 lead in the first set before a 5-0 Fullerton run turned it into a tight affair that went into extra points. Then, with the Matadors down 30-29 and looking like they were going to have a collapse, Hinger came up with two of the three consecutive points that won the set for CSUN, 32-30.

“Not particularly happy with the way we played tonight,” said CSUN head coach Jeff Stork, whose team hit .080 in the first set. “Happy with the result.”

The dramatic set win was nothing compared to the second, however. CSUN came out sluggish and trailed 6-1 early on. The deficit only got larger as Fullerton seemed in full control.

Then, the Hinger Show began. The freshman had four kills and had a hand in four blocks as CSUN turned a 17-11 deficit into a 21-20 lead. She appeared unstoppable before the confused looks of the Titans, who ended up falling 25-21, as the Matadors went up 2-0.

Fullerton didn’t have much fight left after the letdown. The Matadors got off to an early lead in the third set and cruised thereafter, finishing the sweep off with a 25-17 win.

“They tried hard, but our team just shut them down,” Hinger said. “There was no answer for CSUN.”

Stork was the one with all the answers, it seemed. His game plan allowed Hinger to become the star of the night. The coach said he predicted Fullerton would defend Hinger’s side one on one, and he exploited the match-up into a game-turning, second-set comeback win.

“I just told (setter Samantha Orlandini) to keep going to the well and use (Hinger) as much as she could,” Stork said.

Given a chance to play for the first time all season, Orlandini listened. She had a team-high 26 assists and played the second and third sets in their entirety. Sophomore Sydney Gedrin, the starting setter all season long, had 14 assists before being subbed out at the end of the first set.

“The rhythm of the play late in the first set gave me reason to think I needed to change,” Stork said.

“Our blocking really helped,” Hinger said. “They run really high sets and we were able to wait and get up and get a strong wall against them. We shut them down.”