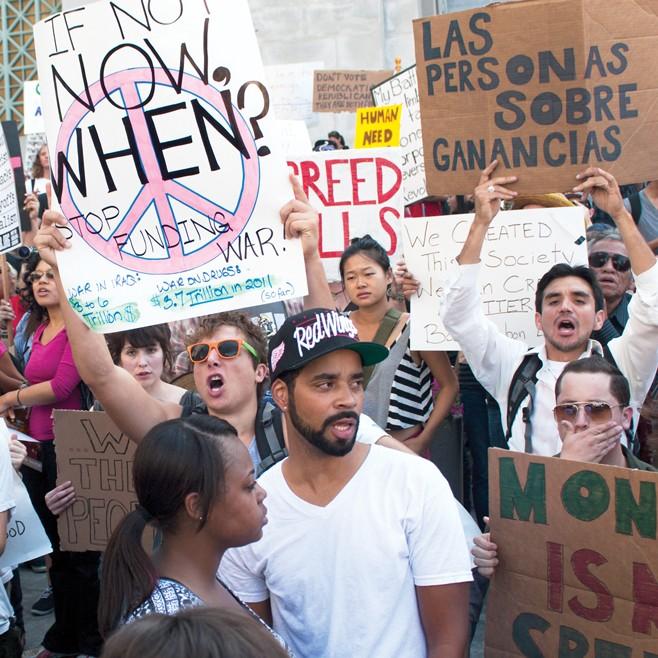 Hundreds of protesters marched in downtown Los Angeles Saturday in a show of solidarity with fellow protesters on the east coast.

The group gathered at Pershing Square at 10 a.m., when students and activists prepared to march to city hall for Occupy LA, a protest done in solidarity with Occupy Wall Street, held in New York.

The movement opposes the behavior of companies and banks, funding war over education and health care, and the U.S.’s current political and economic system which, they claim, favors the rich over the poor.

Occupy LA, like Occupy Wall Street, the demonstration in New York, will continue their protest until the “99 percent,” those outside of America’s top one percent of wealthy and powerful, are heard by media and politicians, supporters said.

“We are against the one percent, those in power and the wealthy, having control over the rest of us,” said Arturo Cambron, 57.  “Personally, I want the war to be brought to an end. I have a son, and he is on his third tour of Iraq. He has come back damaged from the war, and I see that.”

College students Heather Ruiz,19, and Kayla Fields, 21, protested the lack of funding for the arts in their college after Fields’ art professors curriculum was rejected. They said the arts are viewed as a hobby, not a career at their college.

High school student Rocio Payan, 16, protested for her parents, who lost their jobs and lost their house to foreclosure because of the poor economy.

“My parents are the most hard-working people I know, and they get paid shit,” Payan said. “How can I go to college if they can’t afford to to pay their bills? They don’t know I’m here, but I just had to come because things are so unfair the way they are.”

The Occupy protests do not have a set end date, protesters claim they will stay until the “99 percent” are heard.  Occupy Wall Street was on its 15th day of protest as Los Angeles started its first.

“Are you in it for the long haul?” one person asked Angelenos over a megaphone.

Those who cannot camp out for night, like Mathew Sandoval, 32, plan to leave and return over the coming days.

Protesters mingled, made posters and took photos as they listened to volunteer security teams and members of the Los Angeles Chapter of the National Lawyers Guild explain guidelines over the general conduct and dealing with police officers.

Occupy Wall Street faced resistance from police, with some demonstraters arrested and others maced by officers.

The Los Angeles National Lawyers Guild were in attendence to ensure people’s rights were not violated, said Mathew Struger, board member of the Los Angeles chapter.

Stuger explained terminology to use against officers to prevent searches and a way to stop interrogation, to participants.

The march and occupation of city hall was expected to be non-violent.  LAPD officers said they would not be monitoring the protest heavily, but police presence was invoked to guide traffic at intersections.

Police tape was set up around the steps of city hall, placed there by LAPD and George Viegas, assistant to the director of the office of operations.

“We have not had any trouble with (the protesters),” Viegas said.  “We’ve had mostly positive discussions with them, but have had to remind people about not crossing the line and watch for vandalism.”

In the current state of the economy, Viegas said he knows most levels of government are not funded the way they should be, but did not comment on if he would join the protest.

Outside city hall volunteers provided a welcome tent for newcomers, a first aid station, snacks, water, an area for legal issues and an open megaphone tent where participants could tell their story and why they were there.

One student expressed how his political consciousness increased after 9/11 and how he felt invisible in his upscale neighborhood.  Others expressed their joy at seeing so many people stand up to the system.

Online liberal blog Crooks and Liars accepted donations the previous day in order to provide pizza and soda for the protesters.

Provisions for the Occupy protests are mostly donated. Occupy Wall Street is reported to have been sent food, extra batteries for camera equipment, and a gas-run generator for electronics.  Attendees shared WiFi from their phones.