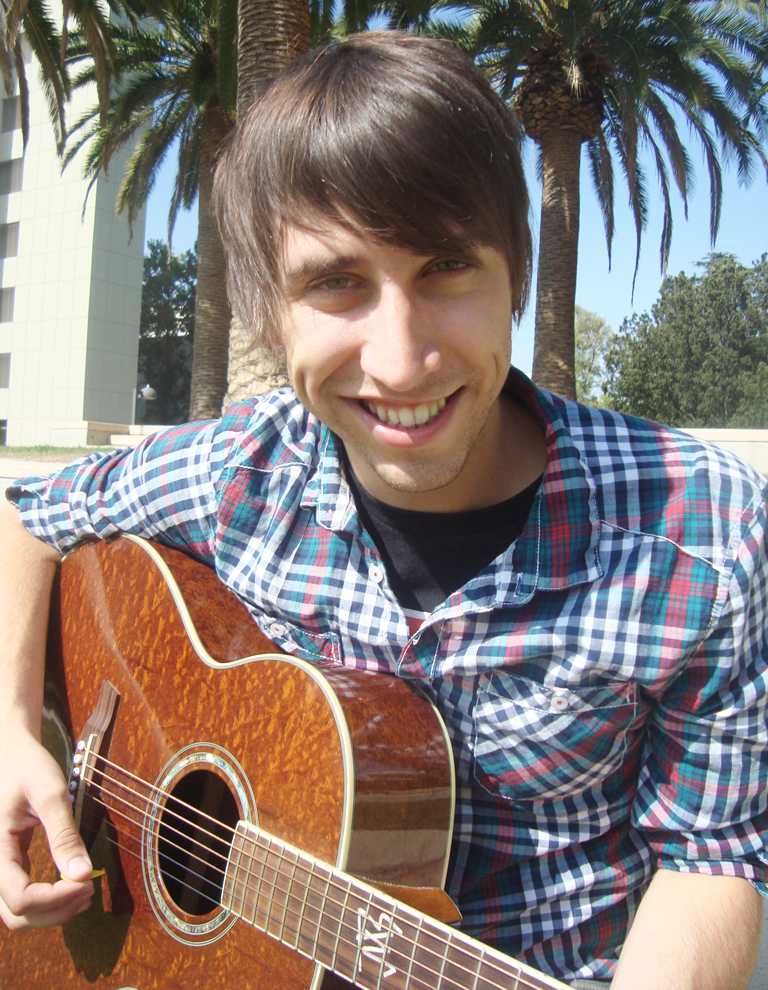 Senior Garret McElver, 24, is currently studying music industry and marketing. He would rather have knowledge of the business rather than be the star himself. Photo Credit: Angela Braza / Daily Sundial

On the outside, senior Garret McElver looks just like every other aspiring musician in Los Angeles. His hair is nothing more than a messy brown ‘do,’ his clothing style is hipster-approved, with tight, slightly torn jeans, a plaid shirt and plastic sunglasses, and his tall, lanky appearance screams the essence of coolness.

However, on the inside, the 24-year-old music industry studies major has no interest in living the rock star dream.

“I gave up the fantasy of being a rock star a long time ago,” McElver said. “It’s a lot of time and effort with a small chance of success.”

Instead, McElver’s dreams have taken a more practical route. Originally a transfer student from San Luis Obispo, McElver has turned to the music industry studies program at CSUN to absorb as much knowledge as possible about the entertainment business. He said it is a requirement for someone in his field to be an all-around expert.

“I figured it’s better to have the skills and knowledge of the whole industry and work behind the scenes,” he said. “I think it’s better to work with people who are willing to put that time and effort into becoming a star than to try to be a star yourself.”

This practical way of thinking is also what led McElver to minor in marketing.

“This major has a business aspect to it, so I chose a marketing minor to really solidify my knowledge of the business side,” he said.

McElver’s realistic attitude goes hand-in-hand with his intense passion for music, something he credits his older brother for giving him.

“My brother basically showed me music,” he said. “He’s five and a half years older than me so he’s always been one step ahead of me in what’s going on in life and he’s led me down this path. He’s one of my best friends.”

The household McElver and his brother grew up in was filled with music and encouragement. His father paid for his guitar lessons and his mother provided the boys with a practice room in which their bands could play. It wasn’t until after high school that McElver realized his passion for music could lead to a potential career.

“I started taking more music classes, and the more I learned the more I realized I wanted to do something toward that,” he said.

During his time at Cuesta College in San Luis Obispo, McElver studied under George Stone, a music education instructor and CSUN alumnus. Stone was prominently known for his membership in the Jazz A-Band and spoke highly of the CSUN music department McElver said.

“He’s pushed me academically and really influenced me to go to CSUN, which I’m very happy about,” he said.

Prior to entering the music industry studies program, McElver was asked to audition with his instrument of choice—a requirement of every student who wishes to join the department. Despite the guitar skills he has acquired since the age of 11, McElver chose voice as his primary instrument.

“I feel like it’s more beneficial to study voice,” he said.

Although McElver has not had a lot of formal education in vocal training, he’s relied on CSUN’s music instructors to help him hone this skill. In particular, he named Judy Scott, an assistant professor of voice, as one of his greater influences.

“She’s great,” he said. “She’s pushing me to do better. She sees the potential in me.”

McElver’s post-college plans are vague at the moment, but he is confident that his music education at CSUN will guide him down the right path.

He is aware of the many career possibilities the music industry has to offer. He has tossed around the idea of managing, but would prefer to take on a job that relates to talent scouting or artist development, he said.

“I want a job that genuinely makes me happy, not something that will just pay the bills,” he said. “I don’t want to lose myself in the cut-throatness that is this industry, and when I find that perfect job, I just want to be happy with what I’m doing.”