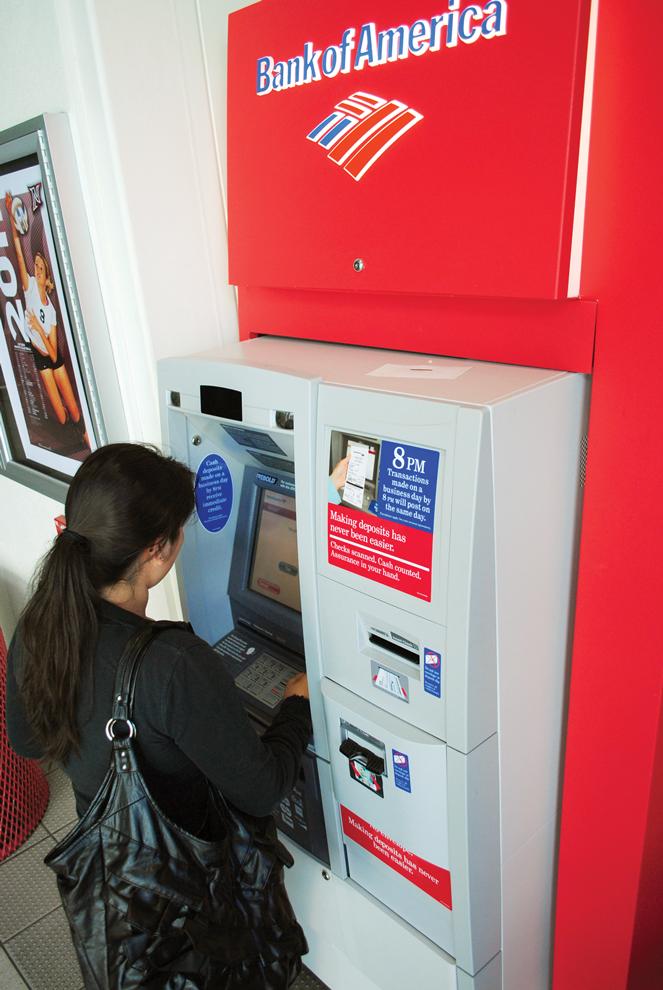 Maria Vasquez, sociology freshman major, 18, gets money out of a Bank of America atm machine in the Matador Bookstore Complex. Bank of America might start charging debit-card users five dollars a month when using their cards to purchase items. "It's stupid. It's not necesary. Why would [Bank of America] take away money from customers," said Vasquez. Photo Credit: Andres Aguila / Daily Sundial

Bank of America  (BofA) debit card users could pay more than just overdraft fees starting next year if the bank approves charging customers $5 a month to swipe their plastic.

New fees are being used to recoup losses banks will incur after a new government bill limits the amount of money banks can charge merchants and customers for debit card transactions, according to the Wall Street Journal and CNN Money.

“Debit cards and checking accounts are for money we already have,” said education major Kaitlin Marks, 19.  “I don’t get why we would have to pay just to use our own money.”

The fee has yet to be finalized, but if it were, the charges would not go into effect until April 2012, said Hector Alvarado, personal banking representative at the Northridge BofA.

The $5 fee will not apply to premium or business accounts, but will apply to ebanking and standard checking accounts, Alvarado said.

“If it is finalized, customers will be notified well ahead of time,” Alvarado said.

Other banks, like Wells Fargo and J.P. Morgan Chase & Co., are expected to devise similar plans for charging debit card users to make up the almost $6.6 billion in lost revenue the industry is expected to face due to these newly regulated swipe fees, the Wall Street Journal reported.

Jeff Brun, 20, said he will seriously rethink being a BofA customer if the fee is approved.

“That is $60 a year just to spend money that I already worked hard for,” Brun said.  “This is not a ‘convenience’ fee to me, it’s just like more taxes.”

New fees, such as this one from BofA, joins a list of changes banks are implementing. In October, Wells Fargo will end its debit card rewards program, which allowed consumers to gain points for using their debit cards, CNN Money reported.

“I think that they will lose customers,” said marketing Professor Deborah Heisley.  “This is a bad time because people are very frustrated with the banks. They see them as having been bailed out and they haven’t risen to the occasion.”

Changes come in response to the Dodd-Frank financial reform legislation passed last year which regulates the charges banks can levy, the Wall Street Journal reported, such as capping charges for debit card transactions at 24 cents.

“It just seems like the banks want more money and don’t care that the laws are trying to help the consumer,” Marks said.

Other students said the change did not seem like behavior out of the ordinary for banks.

“You already seem to get charged so much for going to other banks or using the ATM, so I’m not surprised,” said Robert Daves, 24, engineering major.

Companies, including American Express, Citibank and BofA, have charged credit card customers an annual fee on certain cards for the last few years, Time Magazine reported.  J.P. Morgan has been testing a $3 fee in Northern Wisconsin, according to CNN.

But depending on the bank, those fees can be avoided.