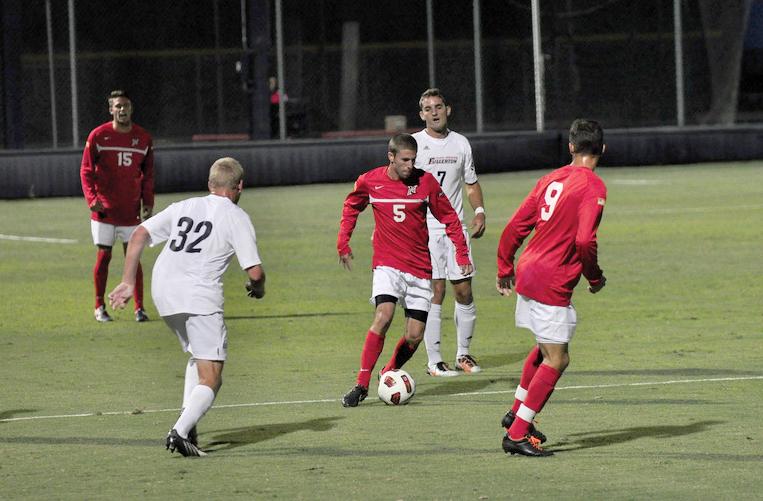 Freshmen have a lot to deal with when they first start college. Living away from home and learning how to survive on their own can make their college experience challenging.

Most freshmen attending CSUN may come from neighboring cities and even a few from out of state. But one freshman athlete on the men’s soccer team came from a different country: all the way from Israel.

Matador midfielder Yarden Azulay is no ordinary freshman. Having to serve three years in the Israeli military prior to coming to the U.S., the 23-year-old has already done some maturing.

“He’s not a freshman in the sense that he’s an 18-year-old out of high school,” said CSUN assistant coach Peter Bomar. “He’s in his 20’s, he’s served in the Israeli military, so he’s known what it’s like to grow up and become a man.”

Born in Israel, Azulay had no choice but to serve for his home country.

“You have to serve three years, no matter what,” he said.

But Azulay tried to make his years with the military an enjoyable experience.

He eventually became a driver for a high-level commander and later joined a group of drivers in the military.

By becoming a driver in the military, Azulay was able to serve his three years while still focusing on the sport he loves.

“I did my time and practiced (soccer) by myself,” Azulay said.

Azulay added that, had he stayed in Israel, he wouldn’t have been able to live the type of life he has here.

“In Israel, I can’t combine my academics and soccer together. It’s this or that,” Azulay said. “Here, I get the opportunity to get them both at the same time.”

“(Raz) is very predominant in the Israeli community in the Valley,” Bomar said. “There’s not a lot of them, so he’s definitely a figurehead. With (Raz’s) family being in Israel and a lot of his friends coming from Israel, we were able to find out about this young man who wanted to come play here.”

It was only a matter of time for the staff to realize Azulay would be an asset to the group.

“The Israeli community knew he’d be a good fit for us,” Bomar said. “And from there, we were just able to work it out with (CSUN athletics) and his family over there (to bring him to) the United States to be a big part of our team.”

It is Azulay’s maturity and experience that has contributed to CSUN’s success so far in the Big West Conference. He currently has three goals and one assist, with his last score coming during the Matadors’ 3-0 victory Saturday against Cal State Fullerton.

“When you bring someone like (Azulay) to the soccer field, it teaches the younger guys, who are traditionally out of high school, how to work and how to focus and prepare for soccer,” Bomar said.