Weekly Column: Five NFL teams that should tank for a chance at Luck 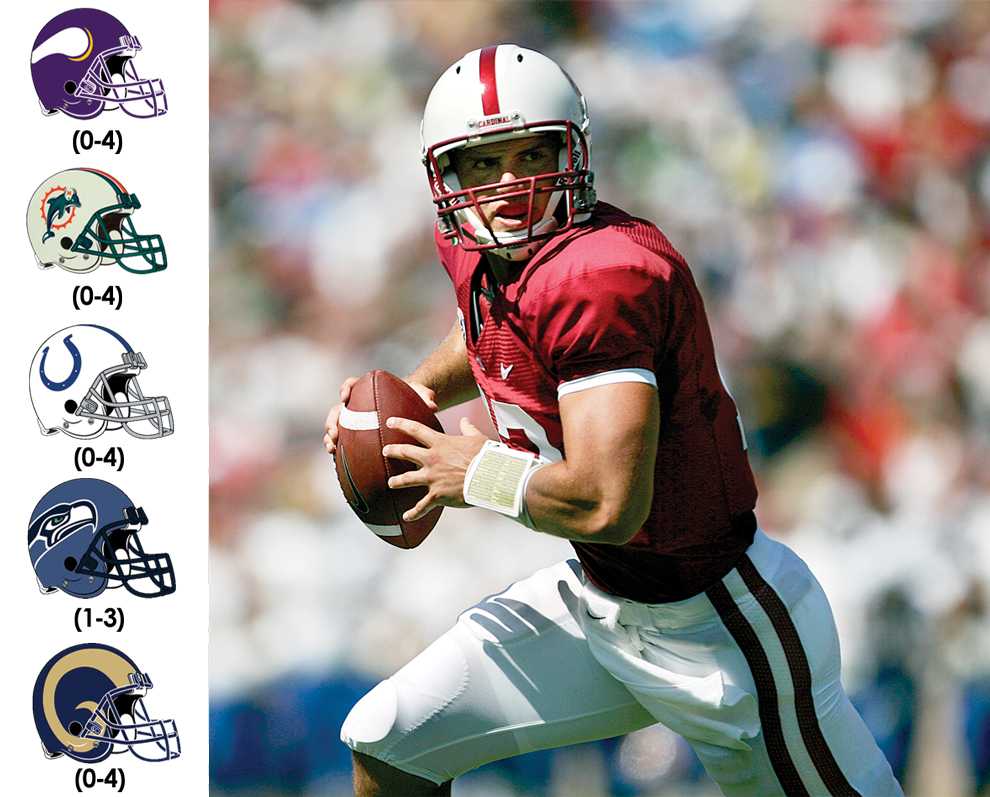 Standord quarterback Andrew Luck will be 2012 NFL Draft's top prize. How many teams are willing to sacrifice 2011 in order to get him? Courtesy of MCT.

The first month of the NFL season has brought many surprises: the emergence of the 4-0 Lions, who seem to overcome any deficit; the Bills not being out of playoff contention already; and the 3-1 49ers beating the Eagles on the road.

But the rise of last year’s failures has left a certain void that needs to be replaced.
A void of atrocity. And boy, is it being filled adequately.
It might be early, but the Vikings, Seahawks, Dolphins, Colts and Rams are playing at such low levels, it might be in their best interest to abandon ship this season and start tanking in order to secure the 2012 NFL Draft’s No. 1 pick, and use it to take Stanford’s once-in-a-lifetime talent, quarterback Andrew Luck.

Minnesota Vikings (0-4)
The Vikings’ situation is dire. With an old, washed-up quarterback in Donovan McNabb at their helm throwing to no-name receivers, they rely solely on stud running back Adrian Peterson to generate enough yardage to keep them in games. They’re winless and blew double-digit second-half leads in the first three games of the season.
Between Peterson already showing signs of being disgruntled with his “I’m tired of losing” statement and the team’s 21st-ranked defense, the Vikings should look to tank the season and draft a QB worth starting – McNabb is averaging a mere 170 yards per game and is last in passing yards among starters. Luck fits the bill perfectly.

Seattle Seahawks (1-3)
The Seahawks entered this season coming off an unbelievable win against the Saints in last year’s playoffs. However, who knows what possessed them to sign Tarvaris Jackson, a sixth year QB who’s averaged 120 yards per game for his career. The only thing Jackson has managed to do well so far is turn the ball over (six times). The Seahawks’ abysmal offensive numbers makes one wonder how they even managed to get a win. They rank 30th in rushing yards per game and 26th in passing.
To turn things around, they need to address their QB situation with a high draft pick. “Luck to (Sidney) Rice” sounds nice.

Miami Dolphins (0-4)
The emergence of running back Daniel Thomas, who’s averaging 101 yards per game, is certainly a welcome site, and Brandon Marshall’s dazzling catches never fail to impress, but the wide receiver can only do so much with Chad Henne throwing to him.
Last year, Henne threw more interceptions than touchdowns and only hit his superstar receiver three times in the end zone. This year, he’s led his team into an 0-4 rut. The Dolphins also rank 30th in overall defense, giving up more than 400 yards per game, it’s clear the team needs to be reworked, and building around Luck seems promising.

Indianapolis Colts (0-4)
The Colts, who usually have the benefit of master tactician Peyton Manning behind center, got unlucky this season as he’s out indefinitely with neck problems. Without Manning, the Colts look terrible on offense, generating only 187 passing yards per game.
While this problem is easily fixable by having Manning return to the lineup, there’s no guarantee he’ll be back this season, so the Colts might as well tank, pick up Luck and have Manning teach him everything he knows. Manning is 35, and having a skilled prospect behind him would be ideal for the franchise.

St. Louis Rams (0-4)
The Rams’ woes can be attributed to injuries: their workhorse running back Steven Jackson went down with strained quadriceps after a 47-yard touchdown run in the season opener.
Sam Bradford, an up-and-coming quarterback, has been through finger and toe injuries while missing his No. 1 receiver, Danny Amendola, who’s likely out for the year with a strained elbow. Nothing’s particularly wrong with the Rams. They’re just a young, inexperienced team with an astonishingly tough schedule.
Their next three games have them going up against the Packers, Cowboys and Saints. Realistically, it looks like they’re going to be 0-7. The Rams could tank and get the No. 1 pick, and perhaps use it to trade for a superstar running back to eventually replace Jackson, who’s pushing 30 and doesn’t have many good years left.

Whether they need him as a leader or trade bait, Luck seems to hold the answers to these teams’ problems. Tanking to get him could be considered unsportsmanlike by some, but it’s a legitimate tactic for struggling teams to set themselves on the right path.