W-Vball: Matadors seek to keep pace atop Big West, on the road at Pacific, Davis 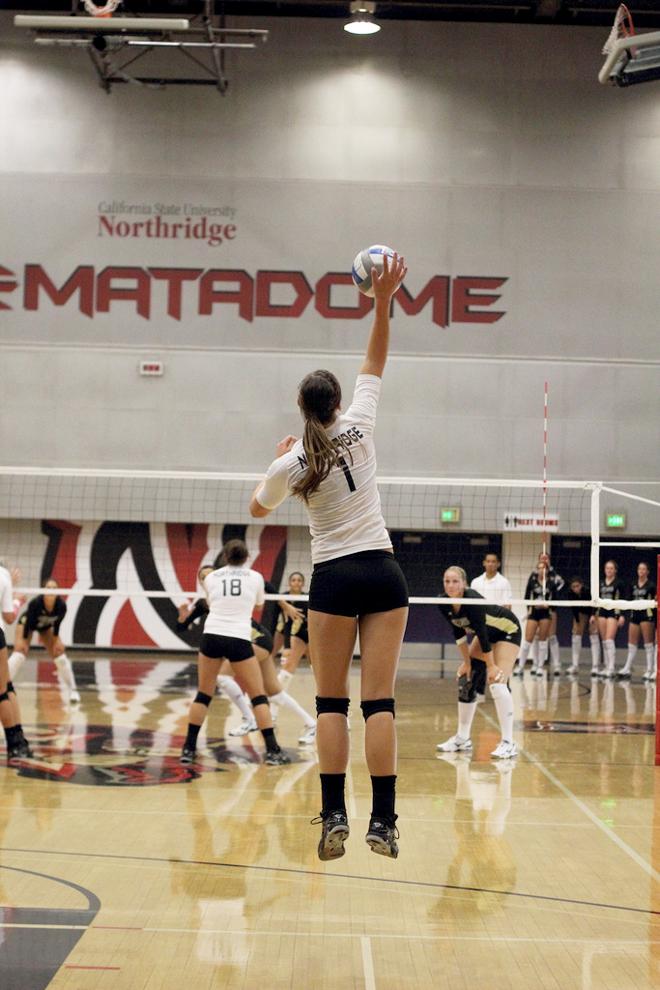 When asked about the Matadors’ chances for their next game, Friday at Pacific, CSUN middle blocker Casey Hinger gave her usual self-assured forecast.

“I have total confidence in our team’s ability to take down (Pacific),” Hinger said.

The statement was no shocker. Confidence is one thing Hinger’s never lacked, and if anyone in the Matador locker room was ever short in team belief, CSUN’s Saturday win over defending Big West Conference champion Cal State Fullerton in straight sets should have served them an immediate faith injection.

Not only did the Matadors (8-7, 2-1 Big West) win at home for the first time this season, they did it with mettle, winning an extra-point battle in the first set and overcoming a six-point deficit in the second.

Hinger’s not crossing the line from confident to cocky, however.

“We’ve got a lot of work to do and we know that,” she said. “We know that was a big win for us, but (CSUN head) coach (Jeff Stork) told us, ‘You’re only as good as your next win.’ So we got to keep pushing on.”

The Matadors, who will also face UC Davis on Saturday, aim to make Pacific (10-7, 1-3) their next victim. Led by outside hitter Samantha Misa’s 3.97 kills per set, the Tigers come into the match wounded, losers of their last two games. Adding insult to injury, one of those losses, 3-1 to UC Santa Barbara on Friday, saw them drop a set by a score of 25-6, their worst single-set loss in the rally score era.

With the disgraceful performance still fresh in their minds, the Tigers figure to come out swiping, CSUN senior setter Sam Orlandini said.

“They’re a physical team, especially at home,” said Orlandini, who made her season debut against Fullerton. “They play tough. We got to push back even harder.”

Orlandini added that Pacific has a special section close to the floor at the Spanos Center where other student athletes like to sit to “heckle” opposing teams.

Stork hopes his game plan will offset whatever homecourt advantage Pacific might have.

“They play primarily a perimeter defense,” Stork said of Pacific. “Also, the speed of their players is such to where if we can get their players to the floor, they have a more difficult time handling the ball.
“So when they do go to the floor, even though they may touch the ball, they tend not to come out of that situation very well.”

While the plan is to beat Pacific with speed and tip-downs, the Matadors are also preparing to defend themselves against their .222 hitting percentage, the second best in the Big West. The Tigers average the most kills per set (14.08) in the conference.

Last weekend was one of experimenting for the Matadors. Stork inserted junior Monica McFarland as the starting libero during CSUN’s 3-1 loss to Long Beach State Friday, opting to bump season-long starter Cindy Ortiz. McFarland had a career-high 30 digs and played “unbelievable,” Stork said.

The following night against Fullerton, McFarland started at libero again, but Ortiz, who averages 4.23 digs per set, subbed in at the position midway through. Stork said he’ll stick with Ortiz for the time being.

“McFarland adds so many things, her read on the play defensively is uncanny and her speed to the ball is unbelievable,” Stork said. “Ortiz right now is just a little bit better of a passer.”

Stork also replaced starting setter Sydney Gedryn with Orlandini after the first set against the Titans. Orlandini, who admittedly was “really nervous” in her first action of the year, had 26 assists.

“Orlandini does certain things real well and Gedryn does things real well in other areas,” Stork said. “The two are actually quite a bit different. It has to do with which one of their skills is more valuable at any one time. Typically those are practice-time, game-time decisions.”