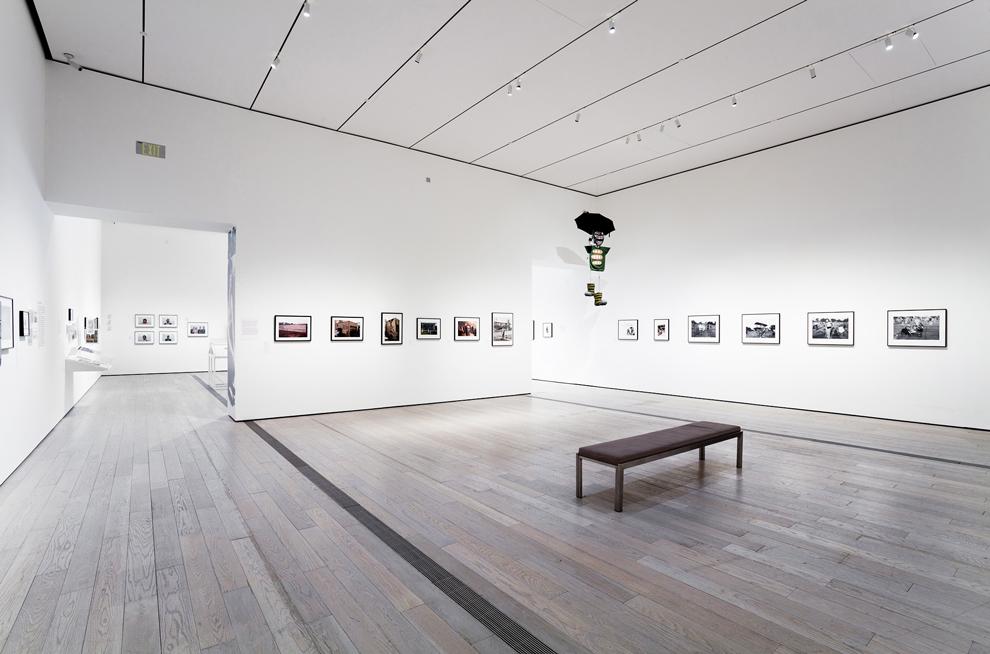 Photographs depicting the political performances of Asco line the walls of an exhibit at LACMA. Courtesy of LACMA

Photography, film and performance documentation consume the second floor of the Broad Contemporary Art Museum at the LACMA for the “Asco: Elite of the Obscure [A Retrospective 1972-1987]” exhibition.

The six-room gallery invites visitors to explore the underground world of Latino artists during a time of cultural intolerance.

The self-proclaimed Chicano art group, Asco took its name from the Spanish word for disgust and nausea in response to socio-political injustices in Los Angeles.

“Being of Latin decent, I found their (Asco’s) message so interesting coming from an era when there was no Latin presence in the art world,” said Xavier Loza, 29, a visitor from Santa Barbara.

Photography was a core medium used to document Asco’s many public performances. The first of their political messages was “Stations of the Cross” where Herron, Gronk and Gamboa carried a 15-foot cardboard cross along Whittier Boulevard on Christmas Eve in 1971. The mile-long procession in resistance to the deaths caused by the Vietnam War is the first series of photographs welcoming visitors to the exhibit.

The first room, alarmingly white, details Asco’s many public affairs through the late 1960s and early 1970s. A collection of artfully produced hand-colored gelatin silver prints by artist Ricardo Val Verde decorate the back end of the room. In the photograph of Asco’s Day of the Dead performance,“Termites y Guerrero,” three masked men parade the streets in almost alien-like costumes. One of the costumes hangs from the ceiling above the photographs.

A projector showcases photographs along the dark grey back wall, accompanied by an acrylic on canvas painting and movie artifacts like the golden snake on adjacent walls. Opposite the replaying movie reel, six powerful photographs by Gamboa depict the rejection and emotion of Chicano art, many of which were explicitly violent.

Ceiling to floor drapes disguise two entries into a center room with yet another movie projection. Unique multimedia set this room apart with life-size canvas figures and large arrows hung from the walls. A spray painted mural bleeds from the canvas to the wall itself, separating the two back rooms.

The spray painted mural, “Bound” was originally created in 1985, artist Patssi Valdez reproduced it at the LACMA for the Asco exhibit. As stated in the description, Valdez chose spray paint for the convenience of being able to carry it in her purse to the studio.

In an almost maze like layout, patrons can meander from one of the last three rooms to the next with a variety of photographs, hand-drawn art work and silk screen productions through the end of the 1980s.

The “Asco” exhibit is part of “Pacific Standard Time,” a city-wide collaboration of cultural centers to tell the story of the L.A. art scene across Southern California.

The eerie, dark setting of Edward Kienholz’s “5 Car Stud (1969-1972)” sets the mood for his civil rights era depiction currently on display at the LACMA.

The headlights of four mid-century cars and a green Dodge pickup illuminate the gruesome scene of four life-size masked men holding down a half-clothed black man while attempting to castrate him. A fifth figure stands nearby holding a shotgun.

Carefully constructed during the late 1960s – early 1970s, Kienholz’s work was a reminder of the violence and racial intolerance during the civil rights movement.

The “5 Car Stud” exhibit first debuted in Germany in 1972 and was then acquired by a Japanese collector, where the collection sat in storage for 40 years.

*Please be advised this exhibit contains explicitly graphic images of violence and nudity.

With a broad entry way and bright skylights, white walls and what looks like a steel roller coaster embedded in the doors, the “California Design, 1930-1965: Living in a Modern Way” exhibition at LACMA screams modernity.

The exhibit features an eclectic collection of household furniture, wall décor and futuristic inventions to shows off mid-century modern design. California’s innovative style help shape the trends and culture of the whole nation.

Located in the entryway of the Tim Burton exhibit, the small space packs a big assortment of funky, less than ordinary pieces. An array of colorful women’s clothing on trend in the 1960s and miniature home models pop against the back splash of white and steel throughout the exhibit.

“California Design” offers patrons a blast from the past giving a unique perspective on contemporary style.