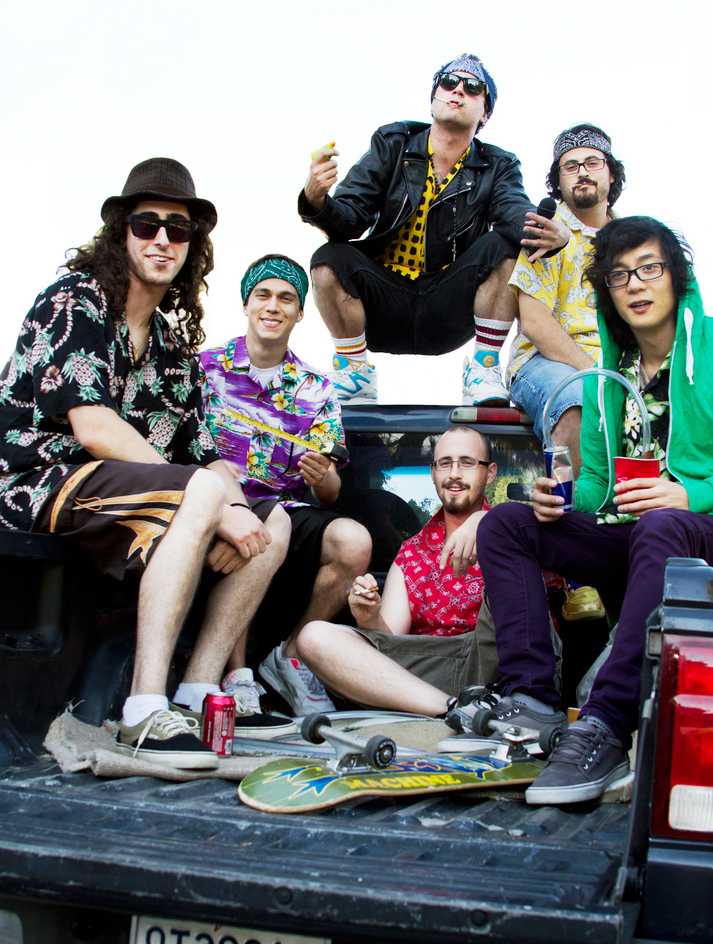 Bartenders and waitresses start closing down O’brien’s Irish Pub in Santa Monica just after 1 a.m.  Wes Singerman, guitarist for BAMF approaches band mate Austin Yancey with a pat on the shoulder, who is winding down from the band’s performance, and hands him his cut for their show that evening—$20.

Students in performing arts have faced challenges to break into their designated fields while trying to make bank and juggling classes at the same time.

BAMF, a funk-jazz band made up of CSUN music major students and created by bassist Jack Keller, began playing gigs at a house party when they decided to branch out.  Now they play mainly at bars, on average once every other week.

Yancey, whose father had been a musician since he was a young child and worked the Las Vegas Strip for 23 years while teaching band and drug counseling to make money, moved with his family to California for better musical opportunities.

The baritone saxophone player said that while he didn’t spend 18 years of his life in music to give it away for free, these experiences allow him to network and meet other musicians.

“We put quality artists in situations where our student can come in contact with them,” said Pratt. “We feel it’s an important aspect for our students.”

Just recently, a group of jazz students had the opportunity to meet noted saxophone player David Binney at Blue Whale, a jazz club in L.A.

For some musicians, like BAMF Connor McElwain whose dad was a drummer and his mother played the clarinet, the music performance world is not foreign.

McElwain said that music to him was the only thing he could identify with and relate passion to.

“It’s not only music, it’s stage performance,” he said, who was one of the finalists at this year’s Angels City Jazz Competition.  McElwain also competed at this year’s Next Generation Jazz Festival which was presented by the Monterey Jazz Festival where he and fellow musicians got an opportunity to play with famous Jazz musicians.

“We just blew them away,” he said.

A graduating senior, McElwain hopes to pay off his student loans by performing his music on cruise lines this summer before going to grad school on the east coast.

Horist started his music career when he was in sixth grade.

“I wanted to play the sax like Lisa from the Simpsons,” Horist said. Too small for the sax at the time, he began to play the clarinet in high school.

“(Music) turned into a passion, then an obsession,” he said.

Now, he plays and writes for several instruments.

Thomas Gallegos, a 21-year-old music major focusing on composing for film, began playing piano at the age of nine. Growing up, Gallegos moved from piano to drums, drums to the guitar, and from the guitar on to singing, growing tired of each along the way. In high school, he became interested in musical theater.

“That’s when it started coming together,” he said.  “(I thought) where can all these things become a strength for me?  The guitar helped me establish harmonic rhythm, the drums create the tempo that makes me hear odd rhythms, and being a pianist puts it all together.”
By the time Gallegos got into CSUN, he was expanding his network by writing music for other students. It wasn’t long before Gallegos and two of his colleagues, Garrett Crosby and Ian Rees, created their own production company, Reelscore Productions.

For their first job, Gallegos said they worked for composer Garry Schyman who composes music for video games.  Working under pressure for two days, they were able to complete a project that would have normally taken three weeks and cost $1,200, which the trio did for the experience.

“At that period of my time at CSUN, I was taking 21 units,” he said.  “There was no way I could have done it on my own, but we managed it together.  I have never seen the sun rise so many times.”

Since then, Gallegos said that their company has scored several films and documentaries.

In fulfillment of his degree, Gallegos is required to produce a live orchestra, which typically runs between $4,000 and $5,000 for food, projectors, and players he said.  The students are responsible for funding the production themselves, whether by scholarships or hard-earned cash.

“Even with my jobs it’s still going to be tough,” he said.

Yancey also thinks about the financial side of things.

Just like the beat boxers of the 40’s who were living in poverty, Yancey said,  “the soprano, tenor, alto sax, clarinet, flute, bass clarinet, oboe, bassoon, these are all the instruments I need to know on a master’s level to make, maybe $30,000 a year, and the poverty level is set at $36,000 a year.”

Pratt said in every profession there are challenges, especially performing arts when the values and musical taste of society fluxuates.

“That challenge is quite known to our students and we encourage to face them quite readily and fast,” said Pratt.

Yancey said he’s continuing his education and going for his credentials to make a career out of his music, which he said people often mistake for a hobby.