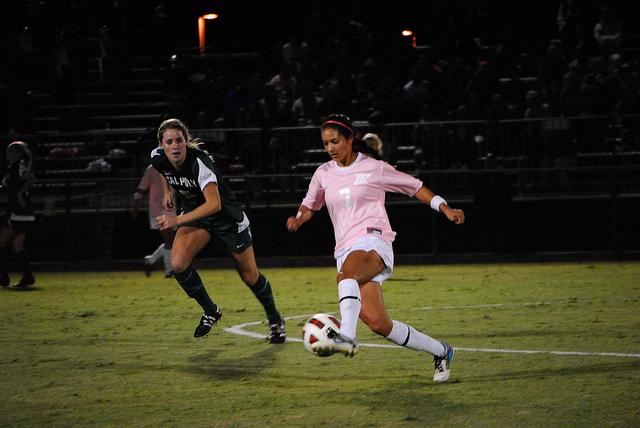 A goal by junior forward Cici Kobinski gave Cal Poly (8-5-1, 2-1-0 Big West) a lead  it would not give up in the 67th minute. Kobinski beat the CSUN defenders and shot the ball past a diving Cynthia Jacobo into the left side of the net.

In the 89th minute, freshman forward Sara Lancaster scored the second goal of the game. Jacobo was on the offensive side of the ball participating in a CSUN free kick when Lancaster stole the ball and had a wide-open net to shoot at.

“It’s fair to say that this wasn’t our best performance of the year,” said CSUN assistant coach Juan Plascencia.  “We didn’t stick to the game plan and our technique killed us. You can’t have your B or C game against Cal Poly. They are a good team and they proved that tonight.”

The Matadors had plenty of opportunities to take an early lead in the first half when they had four shots on goal compared to only one by the Mustangs.

The best chance for the Matadors came in the 16th minute when senior forward Heidi Farran’s shot from just inside the penalty box went inches over the crossbar and Mustang senior goalkeeper Brooke Gauvin’s outstretched arm.

CSUN again had a great chance to take the lead after junior forward Melissa Fernandez’s corner kick bounced in front of the net and into Gauvin’s arms.

In the second half, the Mustangs had five shots on goal while CSUN only had three.

The Matadors gave themselves plenty of opportunities to tie the score, but they could not find the back of the net.

“It wasn’t one of our best games,” senior defender Brielle Slepicoff said.  “It was a rough one to lose.”

The Matadors will have another opportunity to get their first Big West conference home win on Sunday against UC Santa Barbara.