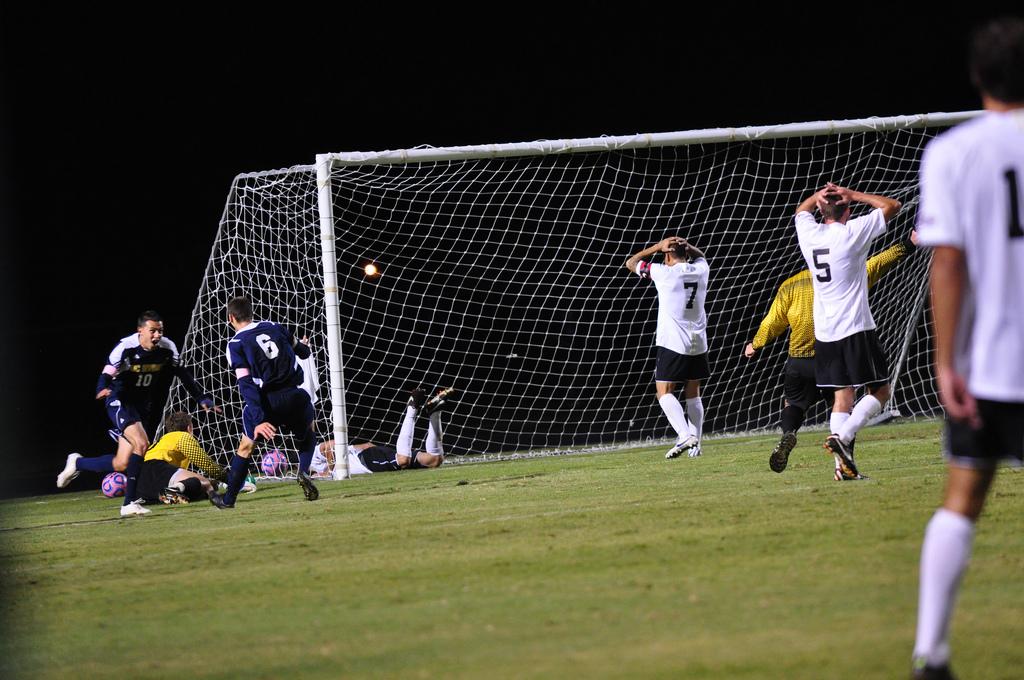 Irvine —  In a first-place showdown, it all came down to saves.

With both UC Irvine goals coming by way of deflections, CSUN (5-5-1, 2-1 Big West) had chances to prevent its 2-0 defeat to the Anteaters (11-2, 3-1) Saturday night, instead the Matadors dropped their first Big West Conference game and fell to second in the standings.

UCI forward Miguel Ibarra dropped the hammer in the 89th minute with a shot to the right side of the net. The Matadors had a chance to clear the ball, but by the time they got to it, it had already spun across the goal line.

UCI found its first goal in the 58th minute, but off a CSUN player. Forward Edwin Rivas was trying to clear the ball away from the net, but the spin of the ball after his deflection found its way into the net.

“It was a fifty-fifty game. It could’ve gone our way easily,” CSUN head coach Terry Davila said. “The ball happened to bounce their way.”

Anteater head coach George Kuntz and Davila exchanged words throughout the first half. Both sides complained about fouls.

“We just didn’t play well,” Davila said. “We weren’t good offensively. We weren’t sharp technically at all. We could never get a rhythm. I thought our offensive movement was at a low level for the past couple weeks.”

The first half produced more fouls than shots for both teams. The Matadors tallied 12 fouls while only producing three shots with two on goal. CSUN finished with 13 shots, 11 on goal.

The Anteaters did not do much better in the half, earning 10 fouls and seven shots with three on goal. They finished with 14 shots, seven on goal, for the game.

Both teams finished with double-digit fouls. CSUN edged out UCI, 17-15.

UCI was close to scoring twice in the first half and tested CSUN goalkeeper Michael Abalos. In the 25th minute, the Anteaters had a free kick set up about 35 yards away from the net while the Matadors set up a five-player wall.The ball was bent around the wall, but Abalos deflected the ball towards the left post.

Abalos finished the night with five saves while UCI goalkeeper Fontein tallied up 11 and had his fifth shutout this season.

Throughout the second half, both sides looked to dominate the match. Unfortunately for CSUN, it was the Anteaters who extended their lead before CSUN had a chance to tie it.

“I’m not ashamed to say today that we weren’t good enough,” said Garcia, a CSUN co-captain. “We didn’t have the quality we usually have offensively. Overall, they were the better team and we didn’t deserve to win today.”