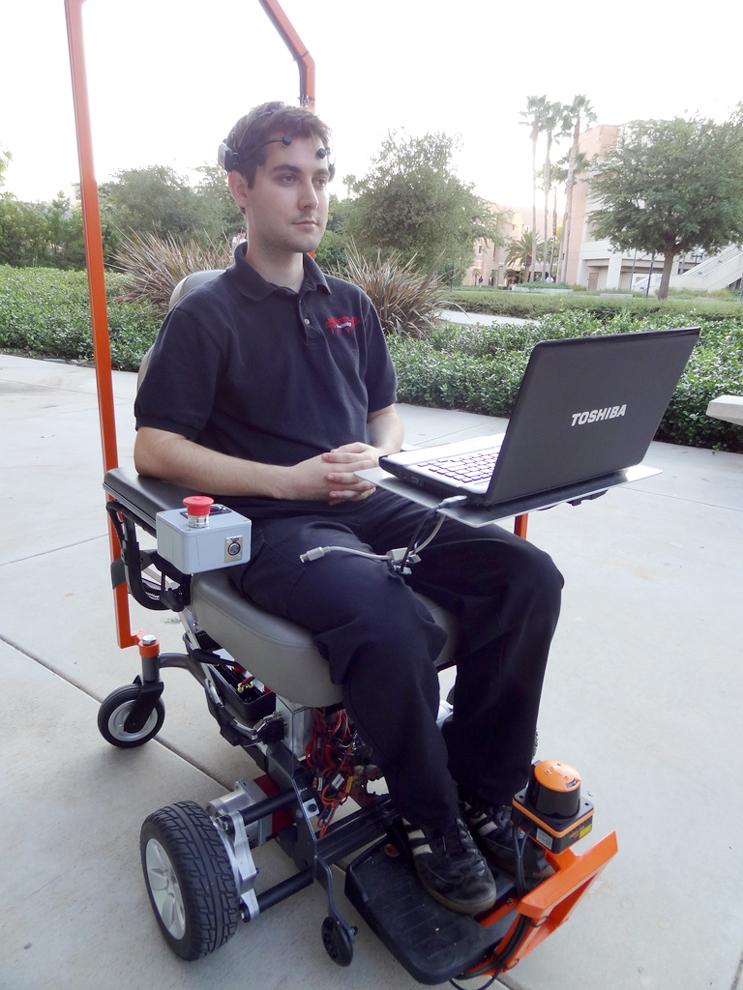 A wheelchair operated by human brainwaves is in its second phase of experiments at CSUN, where a team of engineers is trying to figure out a way to operate the chair outdoors.

The chair, estimated to cost $10,000, is built with intelligent sensors which are placed at the bottom of the chair to recognize oncoming objects, said Dr. C.T. Lin, director of the project and CSUN mechanical engineer professor.  But this is technology is not enough to make the wheelchair safe for use.

At the highest point of the chair is a camera, which functions to pick and recognize tabletop objects, yet the camera would not be able to recognize a wide landscape.

“Outdoor is a much more challenging dynamic environment situation,” Lin said. “You have a variety of terrain that may not be user friendly to the chair itself.”

Another difficulty the team is facing is a lag time between motion commands from the brainwave helmet, which can create confusion, said computer science graduate Lee Hern.

These challenges cannot be fixed so the team will have to become used to the limitation of the system and learn to work around these limitations, Hern said.

“What we are trying to focus on is the base command which will protect the user and the wheelchair,” Hern said.

Improving command recognition will help avoid running into walls and other approaching objects.

In order to enhance the performance of the wheelchair, the team needs a computer that can rapidly process incoming data from the sensors, said mechanical engineer graduate student Ara Mekhtarian.

Once the wheelchair is ready to be tested, approved by the U.S. Department of Rehabilitation and made accessible to the market, users with physical disabilities will have to complete a training course to use the wheelchair.

The training course involves two parts: training with the headset and training with the entire system, Lin said. Users need to learn the commands that must be given through brainwaves and picked up by the headset. Commands will be comprised mainly of movement instructions and directions.

Craig Euler, mechanical engineer graduate, said the contact electrons is what picks up the brainwave signals by measuring the brain’s voltage through the headset. The wheelchair will need to be programmed by the user and they will have to train the computer to their thought process for the system to recognize the commands.

“The computer will detect those thought patterns and make a sample of them so it may identify a pattern of movement which then will be added to the computer data,” Euler said. “After training the computer program, it will be able to navigate the way.”

The headset will not penetrate the brain, however, Lin said.

“The headset is passive and does not generate any stimulation to the brain,” Lin said.

The project is scheduled to be test-ready before it is released to the market by the summer of 2012, making the project a two-year experiment.