Army Lt. advocates equality for LGBTQ in presentation at CSUN 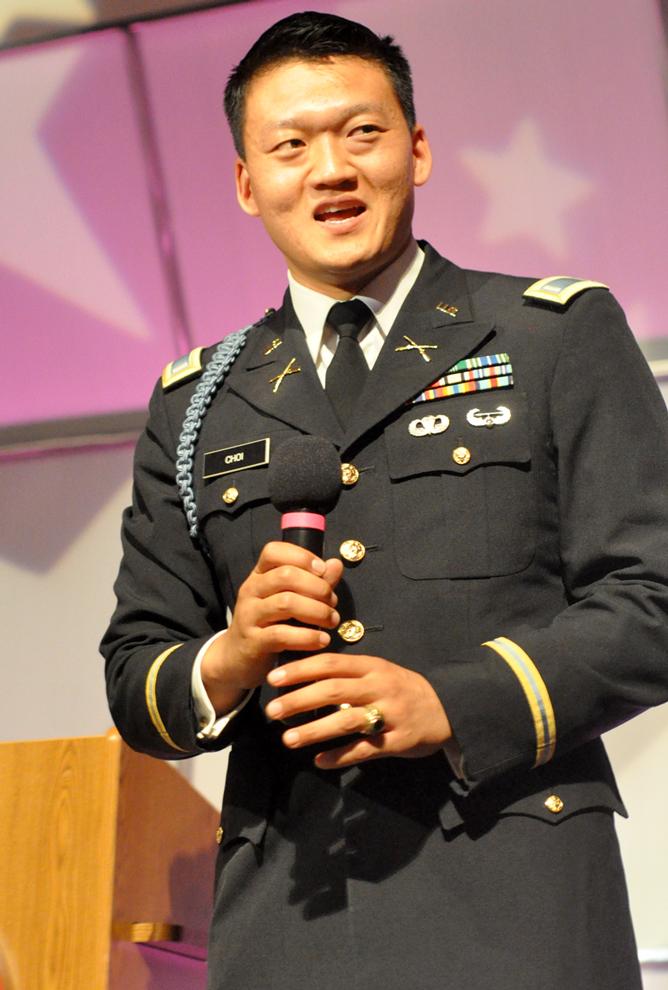 Lt. Daniel Choi speaks to the CSUN community about the repeal of "Don't Ask Don't Tell" at the Northridge Center at the USU on Tuesday. John Saringo-Rodriguez / Contributor

“We’re shwing that we are fighting for love,” Choi said during his Tuesday night presentation at the Northridge Center. “Even though we are the most stigmatized people in history, we fight for love.”

Brought to CSUN to celebrate love week and national coming out day, Choi said gay people deserve the same rights as everyone else, whether they’re in the military or not.

“Gay people can die for America, but they can’t have equal rights,” Choi said. “We’re not battling homophobia here, we’re battling straight supremacy. When politicians tell us we can’t serve or get married because of our sexual orientation, it just reeks of supremacy.”

Advocating freedom and equality is a duty of all people enlisted in the armed forces, Choi said.

“This uniform is not just for white people or straight people anymore,” he said. “It’s for all Americans now, and anyone who doesn’t defend equality doesn’t deserve to wear the uniform.”

Choi said the constitution guarantees equality for all people, and politicians should take that into consideration when passing laws.

“When I read the Constitution, I see a mandate for everyone’s equality, and we should fight for that equality,” Choi said. “I condemn Republicans who stand up and boo gay soldiers, and I also condemn Democrats who sit idly by and do nothing about it.”

Choi called for all gay people and their straight allies to band together and demand equality for everyone.

“Our straight allies are extremely important to us,” he said. “After all, straight people literally birthed the gay movement, and, mark my words, in 50 years, gay people will have equal rights.”

Choi, the son of a pastor, grew up a Southern Baptist Christian and said he wasn’t afraid of the military’s policy.

“When I first came out, I wasn’t afraid of the don’t ask, don’t tell policy,” he said. “I was afraid of my parents because they’re very religious.”

Choi said his father had trouble accepting him because being gay was considered a grave sin according to his father’s faith, and goes against the fundamental teachings of Christianity.

“My father said being gay was the number the one sin, but I reminded him that Christianity’s number one rule is to love your neighbor like you love yourself,” Choi said. “I came out because I love my parents.”

Being gay and a Christian shouldn’t be mutually exclusive, he added.

“Being a Christian and gay is seemingly a dichotomy,” Choi said. “But it’s not.  You can be both, because those anti-gay scriptures are archaic and times have changed.”

Martin Pousson, a CSUN professor who teaches English and Queer Studies, said he thought Choi was an inspiring figure to the LGTBA community.

“The way Choi came out on national TV was extremely encouraging,” Pousson said. “He was ready to take it head on, and he showed people you can be yourself and still support the things you love.”