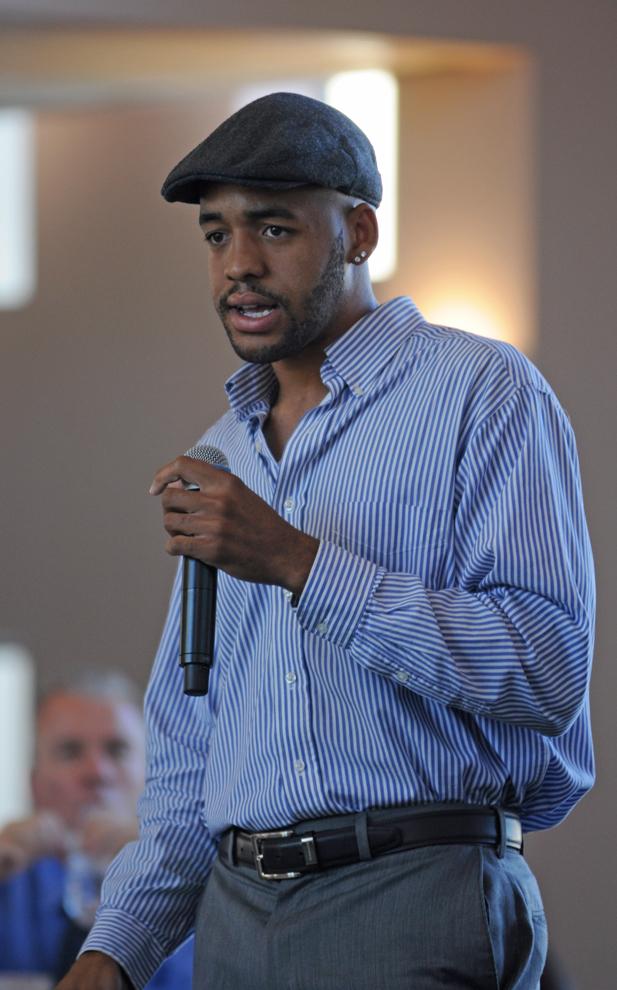 Justin Marks, English and Pan African studies major, presents a proposal for AB 1481 to the Associated Students senate. Marks was seeking A.S. support for the bill that with enough signatures could be on the November ballot. Photo Credit: Ken Scarboro / Editor in Chief

Wednesday’s article “Taxing oil for school” did not specify what entity at Cal State Los Angeles supported AB 1481, the proposition calling for a new severance  tax on oil, the proceeds from which would go toward state education.

Cal State LA’s Associate Students drafted a proposal in support of the bill, which supporters are trying to get on the November ballot.

Supporters of a proposed bill that would impose new taxes on oil companies and divert the money to state education lobbied Associated Students Tuesday for their support.

AB 1481 proposes a 15 percent severance tax on oil and natural gas be implemented, potentionally bringing over $3 billion budget to California’s educational system with 14 percent of those revenues going to the CSU.

The senate did not take any action on the measure during Tuesday’s senate meeting.

“Let us be statues and be unmoved in our convictions to change things,” said Justin Marks, CSUN student and supporter of the measure. “CSU could be ballin’ once again.”

Marks said the support of A.S. could bridge relations between other clubs and organizations which would come together to collaborate on the initiative.

He suggested hosting competitions between organizations to see who could obtain more signatures to get the initiative on the November ballot. He also urged A.S. to help fund the measure to support television and radio promotions.

“If we could promote B.O.B., I think it would be good to promote one of our own,” Marks said, referencing the headliner at this semester’s Big Show concert.

President Amanda Flavin said she would not support the initiative until amendments were made to ensure the overall budget would not be penalized with the addition of new funds.

The proposal drafted by Cyprus College professor Peter Matthews stipulates that this tax cannot be passed to consumers “by way of higher taxes for oil, natural gas, gasoline, diesel or other oils and consumable gas products.”

Companies that fail to comply could face a fine double the amount raised to the consumer, the proposal read. All fines would be directed back to customers as a rebate check at the end of each year.

According to Marks, California is the third largest producer of oil, behind Alaska and Texas.

California had one of the best educational systems, but has now dropped in stance due to the state’s many economical problems, Marks said.

“We can change our reputation at CSUN,” Marks said. “We can be at the vanguard of what this country is facing.”