Slaughtering a sheep in the Peace Corps 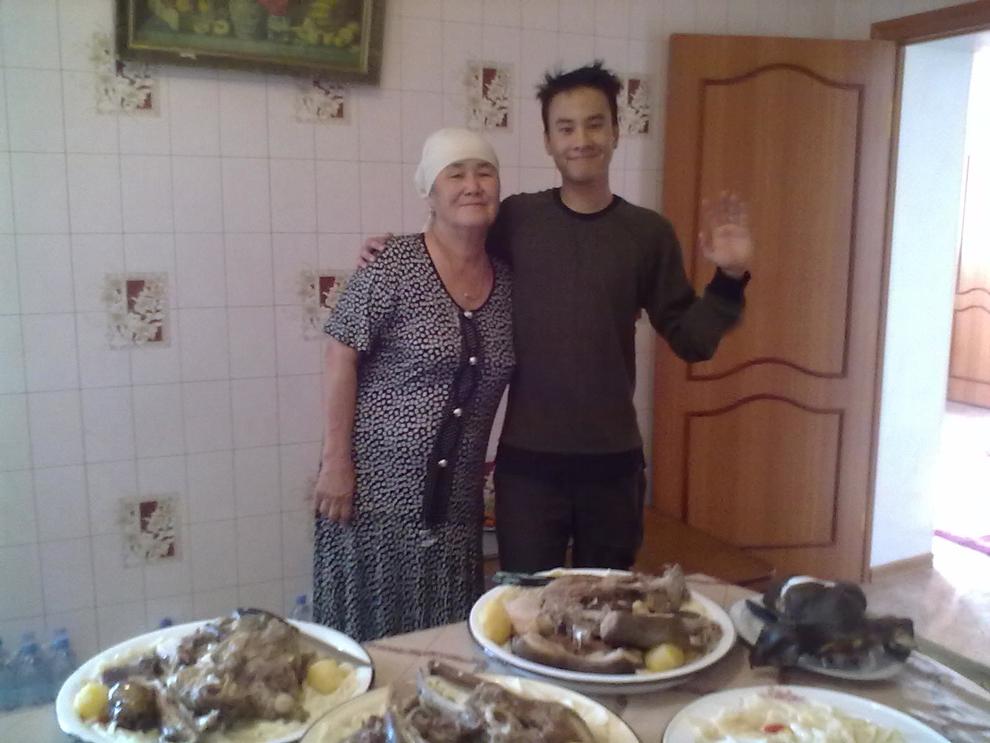 Beshbarmak is the national dish. In the corner you can see an entire sheep's head. The head is distributed and eaten in a very specific sequence according to custom. The tongue is consumed for the gift of eloquence, the eyes are eaten for the gift of foresight, and then the brains for wisdom. Photo Courtesy of Tommy Vihn Bui

Beshbarmak is the national dish. In the corner, you can see an entire sheep’s head. The head is distributed and eaten in a very specific sequence, according to custom. The tongue is consumed for the gift of eloquence, and then the eyes are eaten for the gift of foresight, and then the brains for wisdom.

It’s just what they do here. They’ll collect all their garbage and light the pile on fire. That’s practical waste management in former Soviet states. I wonder if I’ll ever get tired of watching giant fires raging idly in the background wherever I go in Kazakhstan? It’s alluring, no?

It probably stems back to the time when we were cavemen and things were catching us and dragging us off into the darkness, and fire was the only thing keeping us from a grisly death.

But braving jeopardy and getting out of your comfort zone is what the Peace Corps is all about, right? I was just thinking about that moment when I was fishing with my host family, and my father asked me to hand him a worm. As I reached into the the bucket’s writhing contents,

I remembered that I’m fearful of worms, and all things worm-like. It’s profoundly debilitating. I remember thinking that terminating my service early might be an over-reaction. And staring at my father blankly — and oddly not responding — was an under-reaction. I dove right in.

Diving right in. It’s become a droning cadence. With vim I accepted an invitation to help prepare a sheep for a looming celebration.

Over the last few months I’ve developed quite a knack for deluding myself that sheep meat doesn’t absolutely tap dance and wreak havoc on my intestinal wall. I’m constantly convincing myself that I have cholera after sheep. So, maybe I shouldn’t be involved in this. You always struck me as the squeamish type, hey. But I hear myself rationalizing it, and I want to shake some sense (nonsense) into me. Lest I forget how I found myself here in Kazakhstan in the first place: brash decisions.

So we slaughtered, cleaned and butchered a sheep. It was messed up. It was like a mob hit. They pulled this thing ostensibly out of a trunk and dragged it over to the sacrificial stone. Then they laughed a bit (as wise guys do) — and then a knife was casually sheathed and out came the trachea.

There was a small degree of pomp and circumstance, though. We uttered a quick prayer before the knife began tickling the sheep’s throat. The sharpening of the knife was a chorus of death that troubled the meek. For a moment, my father placed the knife atop the sheep to attend to something else. And I thought of Jesus Christ having to carry his own death instrument up Golgotha.

There was just the hissing and whistling of the sheep’s windpipe after the death stroke. The eyes big and confused. This inlet of blood flowing into a hole prepared beforehand. And it took a long time for it to die. The sheep evacuated it’s bowels before expiring. And it kicked and heaved for everything its worth.

Two of the young girls ran across the way to shield their eyes. But curiosity overpowered their childish fears, and they peeked anyway.

Then came the grisly sound of vertebrae cracking as my host father busted a Steven Seagal on it and deathbent the neck. The sheep then started to convulse violently and steadily. The entire process was a good two to three minutes.

Then came the dissection. A T-section was cut into the belly, and the guts came spilling out. Everything was neatly removed. It looked like they were removing fleshy jellyfish out of the sheep and into a bowl. The hearts and the lungs looked like a face-sucker from “Aliens.”

Then it was sewed right back up and click, click went the flamethrower. Before my eyes, the sheep seemed to shrink — a solid scorching. It was braised and cleaned thoroughly. Its tongue leering in a morbid rigor mortis. Every time the flame seared across the eyes, they would slowly close, as if the sheep was watching midnight infomercials and was fighting a losing battle with sleep. He would soon be counting himself.

By the end, the sheep looked like a charcoal drawing of itself. Its legs frozen as if in midleap over a fence to freedom. But on its back, it looked sadly inevitable. Like a dead cockroach. I must admit it smelled rather delicious. The ashes from the sheep rose up and rained down upon us.

The butchering commenced. Every part of the sheep was partitioned and salted. I witnessed the entire process. From mewling in the trunk to butcher shop-window meat.

I looked away for a moment and saw a doddering old man with his grandson on a tricycle. They were walking out into the cool, evening air. They could care less about sheep at the moment.

And that day, Oslo bathed in blood.

In our celebrations, no one mourns the sheep.

Later, we arrived home and we watched our fish tank for awhile. It’s one of the past times I actually enjoy quite immensely. We watch and we let the fish’s obliviousness do the talking for us.

Tommy Vinh Bui is a CSUN alumnus volunteering for the peace corps in Kazakhstan, Kyzylorda.